Naturespeak: Discovering tracks in our own backyard 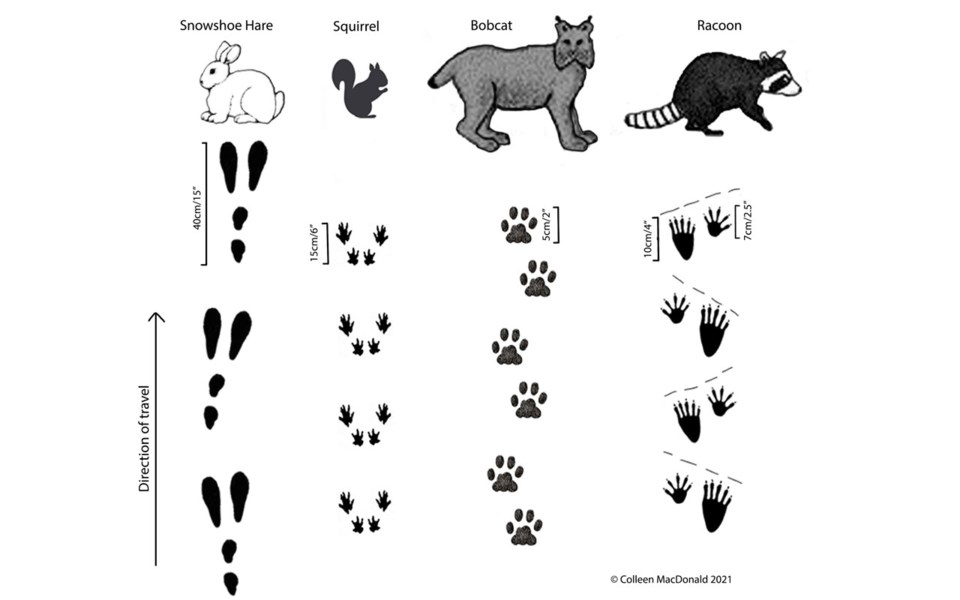 STEP BY STEP Take look at tracks in your yard and elsewhere and see if you can identify them using this handy chart.Illustration by Colleen MacDonald

Fresh tracks in the snow! Out our window, my three grandkids and I spotted four sets of animal tracks weaving through our backyard in White Gold. We donned coats and boots, grabbed a tape measure, magnifying glass, and camera, and headed outside to identify the tracks.

We recognized two of the sets. A snowshoe hare has a distinct pattern of two circular front feet in a line then large snowshoe-shaped back feet side-by-side in front, like a “Y.” We have often spotted snowshoe hares in our garden and enjoy watching them change colour through the seasons. A second set of smaller prints, we also knew, were made by a squirrel—two hind feet side by side and two front feet in front in a roughly U-shaped pattern.

But two other sets of tracks were a mystery. The first had one large pad and four round toe pads. Was it a dog or coyote or maybe a bobcat? The second was a print with five toes and the tracks travelled through the yard in a Z-shaped pattern. But after photographing the prints and track patterns, then looking for information on the internet, we were still puzzled. So we asked the Whistler Naturalists for help and the mystery was solved—a bobcat and a raccoon had also walked through our yard that night.

BioBlitz scientist Mallory Clarke wrote: “Five-toes is most definitely a raccoon. On all the prints you see the toe pads connected to the palm pads by long skinny toes. Its pattern is two tracks side-by-side, one front paw and one back paw. The long string of tracks shows that the prints alternate—front on left, front on right. I like to think that the raccoon, which sports a Zorro-like mask, makes a Z-like pattern in the snow. Good mnemonic device when first starting out.”

We especially like her suggestion to try to move like a raccoon: “To experience the typical raccoon waddle in your own body put a hand and a foot side by side on the floor then step forward with the other foot and put the other hand down next to it—over and over.”

A few days later, there was a fresh snowfall and we saw a line of bobcat prints in our yard—we now know that dog or coyote prints would have shown claw marks—and followed the tracks as they wove through backyards all the way to Lost Lake Park. Neighbours along the way confirmed they had spotted the bobcat walking through their yards and hiding under a shed.

The following week I happened to be in the right place at the right time—as I was walking in Spruce Grove, a bobcat ran across the road in front of me! Our family is enjoying being new members of the Whistler Naturalists and my grandkids are excited to learn more about tracks and wildlife in Whistler.

Naturespeak is prepared by the Whistler Naturalists. To learn more about Whistler’s natural world, go to Whistlernaturalists.ca.