No winner for Whistler at all-candidates debate

Some things were very clear to me from our all-candidates debate Oct. 9—some of those on the stage thought the event was all about them personally, and, no one candidate is the "complete package.
Oct 17, 2019 12:00 AM By: Clare Ogilvie 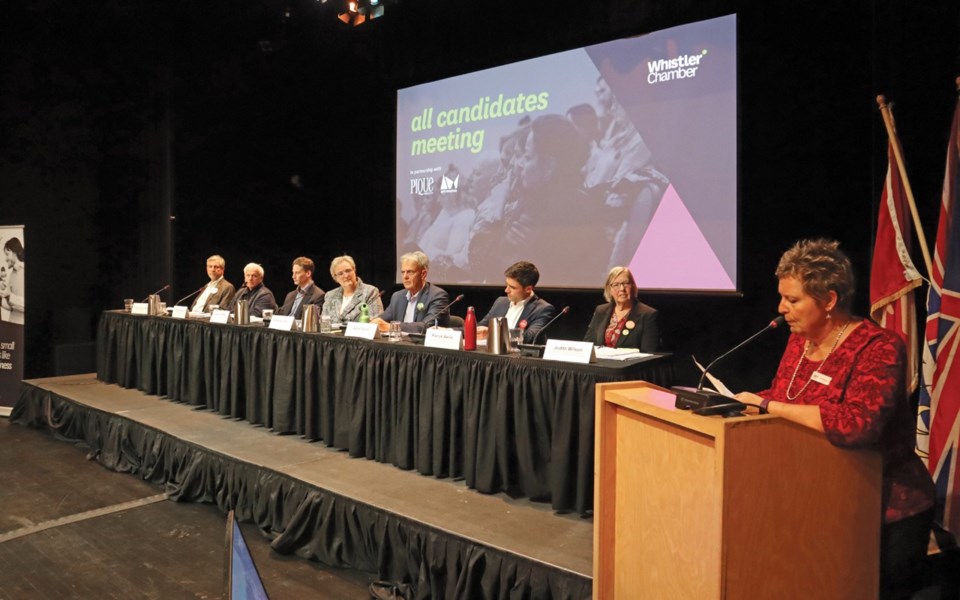 Some things were very clear to me from our all-candidates debate Oct. 9—some of those on the stage thought the event was all about them personally, and, no one candidate is the "complete package."

Each of the candidates with established parties had something to offer, but I'm not sure anyone in the audience left the venue ready to tick the ballot box based on what was heard at the meeting.

In a rather shocking and rude move Grimwood began to pack up his things and harrumphed off the stage about an hour into the meeting. As he left he shot a side-long comment at the moderator saying the format "didn't work for him."

The take away for all the people who had taken time to come to the Maury Young Arts Centre for the full-house event was Grimwood didn't have time to wait and answer any questions put to him—he wanted to simply have a chance to sit and lecture everyone on his own platform.

Sorry—all-candidates meetings are for voters to ask questions and get to know those running, not to sit and listen to hours of speeches.

Moderator Mo Douglas nailed it when she said after Grimwood's departure and comment on the format: "Quite unapologetically, that's not the point. The point is to have this format work for [the audience], because whoever is elected will be working for [the voters]."

Some levity was brought to the evening by the Rhino Party's Jeffrey and his barbs at fellow candidates. Sadly, he did not turn up in his banana suit for this meeting (his attire for the Squamish all-candidates meeting earlier this month). Indeed his tone has done a 180-degree turn since he first announced his candidacy running for a party that stands on a platform of not keeping any of its promises.

He is now taking the whole election quite seriously—which maybe fits his party after all, as he is not keeping his promise to be the voice of satire and making every issue from national defense to employment his No. 1 priority.

Maybe he should have run as an independent?

What was missing from all the candidates was a clear focus on how they could support Whistler if elected.

Not to take away anything from our friends up and down the riding, but we have some issues that need to be dealt with if the province want this goose to keep laying the golden egg: Lack of labour, a reliance on tourism (which needs to be considered as we face the climate crisis), affordable housing, access to childcare and support for small business from a taxpayer perspective to name just a few.

You would think that the candidate for the current Liberal federal government, which is committed to huge growth in national tourism ($120 billion by 2025 and 54,000 new jobs), would arrive at the meeting with some solid ideas about how to help with our labour shortage.

But when asked about our "critical" shortage of workers by Melissa Pace, Whistler Chamber CEO and co-host of the event, Liberal candidate Weiler said: "It is something I would be very committed to working to reform to work with the Chamber, to work with Tourism Whistler, work with the business community here to see what better ways we can fill some of these labour shortages."

Fighting words on our behalf? Hardly.

But also a reality check for voters no matter their choice at the polls. These days, decisions on issues that matter to us are coming from a tightly controlled political leadership—no matter what party is in power.

In Election 2019 carefully consider the party leadership. Do the values of the leader match yours, are the long-term goals for Canada, and we the voters, at the forefront of the party platform, is there a plan to take action on the climate crisis?

Think on these issues and what is important to you and then, please, get out and vote!