Of oceans and plastic

In case you missed it , June 8 was World Oceans Day. The idea of an annual day to bring awareness to ocean issues was proposed in 1992 by Canadian organizations at the United Nations Earth Summit in Rio de Janeiro, Brazil, and readily adopted.
Jun 14, 2019 1:30 AM By: Leslie Anthony 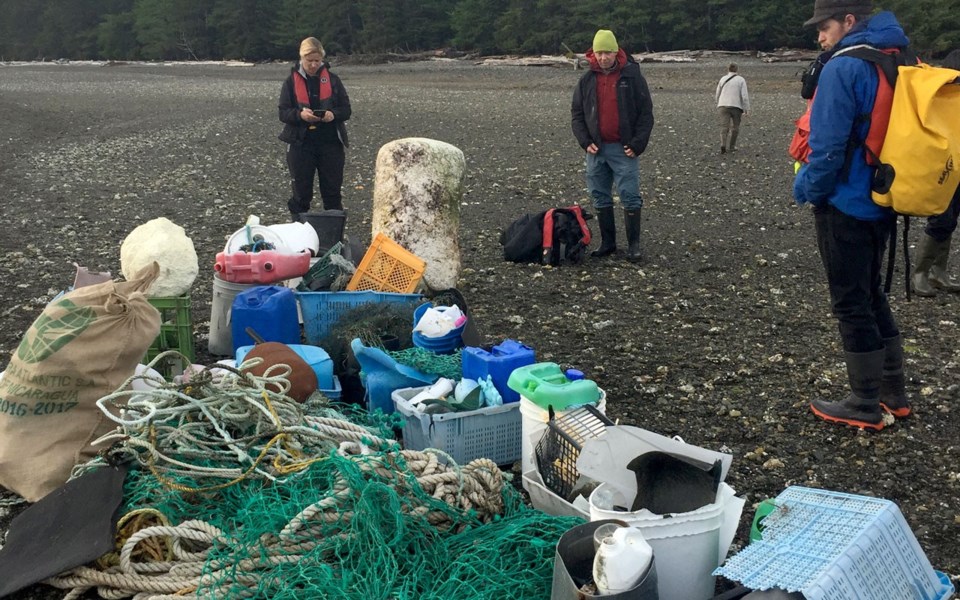 THE HAUL An hour's garbage picking on a beach in Haida Gwaii yields all manner of fishing industry waste as well as telltale items like Asian water bottles and a tube of Russian toothpaste. Photo by Leslie Anthony

In case you missed it, June 8 was World Oceans Day. The idea of an annual day to bring awareness to ocean issues was proposed in 1992 by Canadian organizations at the United Nations Earth Summit in Rio de Janeiro, Brazil, and readily adopted. This year's incarnation brought me particular cause for reflection as it fell on the day I finished a boat trip with Bluewater Adventures through Gwaii Haanas National Park Reserve, National Marine Conservation Area Reserve, and Haida Heritage Site. Part of the fabled Haida Gwaii archipelago and jointly administered by the Haida Nation and Parks Canada, Gwaii Haanas is the world's first representitive area, protected from the summit of its mountains to the ocean floor. As one of the crown jewels of Canada's national park system, the interconnections of land and sea here are truly realized and curated—whether it be the intertidal splendour of Burnaby Narrows, the much-on-display energy transfer from sea to forest by seabirds and bears, or ancient Haida fishing weirs and clam middens revealed at low tide.

Travel in Gwaii Haanas involves appreciating this interactive ecological jigsaw and, when chance presents, aiding its preservation. Such was the case one morning when, anchored near its southern end, we cruised up an inlet in a Zodiac, then bushwhacked over an isthmus through serious blowdown and boulder-like grass tussocks to explore an unnamed half-moon beach exposed to the full force of the Pacific. Otter and deer tracks crisscrossed black sand and ravens screamed indignation as we marvelled at the massive log piles marking tide line. The secluded cove was lovely, but we had a greater mission: being first on this beach after a wild winter of storms, we fanned out, burlap sacks in hand, to pick up plastic. You didn't have to go far to find a first bit, and then you were pretty much stooped over for the next hour.

Most common were cheap plastic water bottles, whole or broken into bits, hinting at the microplastics already working themselves into sand, plankton, seaweed, fish, and everything higher up the food chain. There were other common items—Styrofoam of every size, colour, and description, and fishing nets and floats on a similar spectrum. Not as common but plentiful enough were fishing-boat crates, fuel and food bottles, dishwashing pads, plastic cigar tips, and toothbrushes. Amidst this desultory bricolage I also made the find of my life—a small fish-net float of green, mouth-blown glass from the only place they're still made, Japan. Plucking such a genuine treasure from the trash heap of humanity spoke to the distance flotsam and jetsam can travel.

Heaving the bursting sacks back across the peninsula, word came over the radio of a humpback whale in the bay where we'd anchored, and our pace increased. We could see it spouting in the distance as we loaded into the Zodiac, but by the time we reached the boat it was nowhere to be seen. Raising the mainsail and heading west, gulls, cormorants, and eagles divebombed a knot of fish boiling at the surface; as we scanned the distant horizon for a tell-tale spout, the whale suddenly surfaced, rolling through fish and birds with its mouth open not 20 metres off the bow, slapping the water with its fin. It took a few more mouthfuls while steadily watching us, then disappeared into the swell.

I couldn't help think of the plastic we'd just hauled off the beach—a tiny fraction of what was in the water. How many times had this whale opened its mouth for a snack only to suck in an unwelcome piece of plastic? Whales were washing up all over the world with bellies full of the stuff. I'd been told before I embarked that a few grey whales washed up in Haida Gwaii this spring, and people were worried—though necropsy results hadn't yet been returned.

On the heels of World Oceans Day, while volunteers cleaned beaches around the country, the federal government announced funding for ocean clean-up, following up with an announcement of a coming ban on single-use plastics. This is welcome news, but no cause to raise a personal foot from the gas-pedal of environmental stewardship, especially when you know what's at stake.

A few days after we'd seen the whale, we'd gone ashore for an evening beach walk. Without thinking, I picked up the first piece of plastic I came across. Then the next, and the one after that. Soon I had a pile. I looked around and saw that everyone else was doing exactly the same thing.