Olympic Legacies – What lies Beyond The Podium? 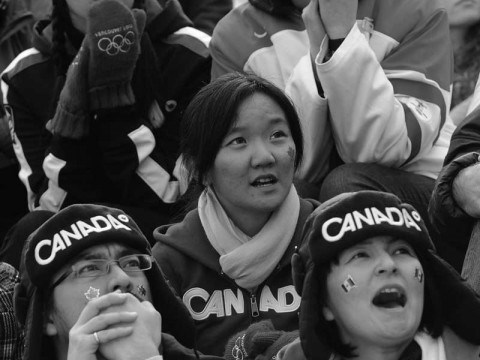 "PM Harper makin' the rounds. LT SpeedSkating & Curling, sittin w/ CDN Oly Medalists. If you like it then you better put a ring on it, Steve."

Greetings. Hope you enjoyed the Games. It certainly looked like you had fun schmoozing with all those newly-minted Olympic heroes. If nothing else I'm sure it provided compelling photo opps for your next election campaign...

Speaking of the Games, I too want to jump on this new "We're number one" bandwagon. I really do. After all, everyone loves a winner. And the way Canadian athletes represented their country during these last two weeks transformed even the most cynical of us into flag-waving cheerleaders.

What a ride they gave us. Whether it was Maëlle Ricker finally putting the golden touch to a 12-year Olympic journey or a giggling Ashleigh McIvor displaying her new medal to the camera - whether it was an emotions-choked Jasey-Jay Anderson hugging his wife and kids or a Denny Morrison leaning tiredly on the shoulders of his victorious pals - the great Canuck medal adventure delivered far beyond expectations.

For me, however, the most dramatic Canadian performance came from a non-medal winning athlete. While most of the country was salivating at the thought of the upcoming gold-medal hockey game last Sunday, Devon Kershaw and his little band of under-funded cross-country skiers were preparing to challenge the world's best in what Northern Europeans call "The King's Race."

Arguably the most brutal and demanding of all Winter Games events, the 50km classic race is considered the ne plus ultra of the Nordic world. In Scandinavia, for example, the Olympic champion in this discipline is feted beyond belief. Most winners become instant millionaires.

For Canadians alas, the 50k is something of an after-thought. I mean, we haven't had a top-20 finisher in this Olympic event in over 70 years. Far better for all of us to focus on the hockey final - as you did - than harbour naïve hopes of cross-country greatness.

So what the heck was Kershaw thinking last Sunday? There he was, with only a dozen kilometres to go, still stalking the leaders. And he wasn't alone. Rossland's George Grey was just a few skiers back and charging. Two Canadians in the top 15. Could they do it? Could they actually defy the odds and cross the finish line among the top three?

It was so close. Kershaw didn't let up. He fought until the very end. Indeed, it was an incredibly heroic performance - after two hours of slogging across hill and dale in 99 per cent humidity he crossed the finish line less than two seconds behind the winner. Still, Kershaw was devastated. "To be that close to gold," he said choking back tears, "it's a very bitter pill to swallow..."

No, the young Canmore resident didn't win a medal. He didn't own the podium. Didn't even get much attention from his countrymen. Fifth place, as it turns out, doesn't count for much in Canada's new world order. But to me, Mr. Prime Minister, Devon Kershaw pulled off one of the truly Olympian feats of these Games. And therein lies the rub.

For the last few weeks, a great debate has been raging across this country over the future of the Own the Podium program. Buoyed by the success of Canadian athletes at these Games, OTP supporters from Roger Jackson to Crazy Canuck Ken Read have argued passionately for an escalation of the program. "Own The Podium is and must be the rallying point," wrote Read in yet another open letter to your office. "It gives us the sense of mission, direction, pride, focus, energy, passion and determination... to be the best we can be."

And how can you argue with that?

But amid all this passion and rhetoric, a fundamental aspect of the debate has been sorely overlooked.

What about the grassroots? What about promoting physical literacy for all Canadians? I mean, it's not like the typical urban resident here leads a particularly healthy life. What about the scourge of obesity affecting an alarming percentage of our kids? Or the growing couch-potato tendencies among our teens? Or the dearth of qualified phys ed teachers in our primary schools? What about the crushing economics of high performance sports; you know, the stratospheric cost of entry that often defeats even the most dedicated of middle-class families....

I mean, there are kids in Whistler's Sea-to-Sky corridor who don't ski because their parents can't afford it. Does that really make sense in a country giddy with Olympic success? I don't think so.

Which makes the blinkered attitude among Canada's sports leaders even more troubling. To hear them speak, all the government has to do is feed the needs of the elite and everything else will take care of itself. Of course, it's way cooler to focus on the top. As I wrote earlier, everyone loves a winner. But winners aren't born in a vacuum. They have to be developed somewhere.

I'm sure you agree Mr. Prime Minister. We can't just focus on our most privileged if we want sustained success. If Canada is to become a bona fide power in Olympic sports - and hopefully a great model for other countries to follow - we have to ensure that opportunities for physical activity exist for all Canadians.

Was it only me? Or did anyone else notice that there was a notable difference between the Canadian "faces in the crowd" and the faces of Canada's new Olympic winners? I mean, did anybody else question why the former offered a rainbow of colors and cultures while the latter (with few exceptions) was shockingly white and Euro-rooted?

I'm sure I don't need to tell you how our country's demographic profile has changed in the last couple of decades. Blame the Liberals if you want, but I believe we're all the richer for it. Whether Indian or Filipino, Chinese and First Nations, 21 st century Canada features one of the richest mélange of cultures anywhere in the world. But you certainly wouldn't know that from a perusal of our top athletes' names and back-stories....

So what's going on? To me, it's obvious. Becoming an elite athlete in Canada is reserved for a very small segment of the population. And it has very little to do with athletic talent. Opportunity, cost, culture, attitude, history - they all come into play. For New Canadians, the obstacles to sports participation - even on a casual basis - can be overwhelming. And that, I believe, is our biggest challenge in instituting a truly Olympian lifestyle here.

But it doesn't take much to eliminate many of these obstacles. Consider my wife's work with underprivileged moms just prior to her untimely death last year.

Wendy drew most of her inspiration from her own experience. As an athlete herself - and then as the parent of growing athletes - she quickly realized that the key to positive change rested with the mothers of this world. This was her "Ah-ha" moment. And it was a profound one. She knew from her university research that kids were far more active in sports if their moms were involved in physical activities themselves.

Don't get me wrong. I'm not talking world-class athlete or anything. Rather, what Wendy discovered was that active moms - whether modest walkers or joggers or more adventurous skiers or hockey players - are far likelier to encourage their offspring to play sports than those who do nothing.

That's why the idea of promoting physical literacy among less-privileged mothers in order to get their kids active appealed to Wendy so much. To her it was simple: get these moms involved, introduce them to the gentle joys of walking or riding or swimming, and then stand back and watch the sport community grow.

And she put her money where her mouth was. Knowing that the smallest of things can make all the difference, she went out and arm-twisted her way to a box-full of free running shoes for her fledgling athletes. The response was overwhelming. Suddenly Wendy's once-sedentary moms were energized. They were ready for a new challenge. Somebody was looking out for them.

Understand what I'm saying? It's all about taking the first step, Mr Harper. It's not complicated. It's not rocket science. All you have to do is create a social environment in Canada where sports becomes an integral part of every day life.

So, by all means, let's keep supporting our top athletes in their quest to be the world's best. I encourage you to come up with a national policy that offers new and creative ways to help them in their future endeavours. But let's not forget the base of our performance pyramid.

Indeed, let's create a Canada where sports programs are available to every one of us - whether white, black, yellow, brown, rich, poor, gay, straight or in-between. Let's make sports literacy a national goal. Let's create a country where "healthy mind in healthy body" is more than just another empty cliché. And finally, let's show the world how we walk our Olympic talk by devising social initiatives that celebrate the best of citius, altius, fortius .

Only then, Mr. Prime Minister, will I be truly comfortable jumping on this new " We're number 1" bandwagon... because then we will be!