"Live dangerously" - Friedrich Nietszche (Michel is away for a few weeks so Pique thought it would share this column from his trip to France in 2012.
May 7, 2014 10:00 PM By: Michel Beaudry 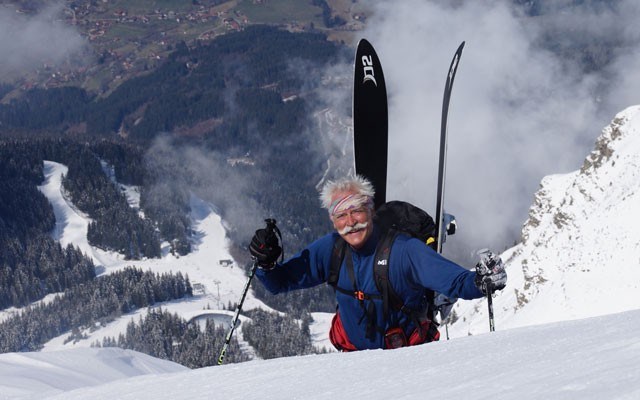 (Michel is away for a few weeks so Pique thought it would share this column from his trip to France in 2012.)

We were on the last leg of a lightning ski trip to Andorra — a 2,500-kilometre epic to the Pyrennean principality that had me reeling with fatigue — and I was already fantasizing about the comfy bed waiting for me back in my home base of Thonon. Not that I was sorry we'd gone or anything. To me, exploring new mountain locales justifies all the discomforts one might experience along the way. Still, I was drained. Dirty. Hungry. A hot shower in my own apartment seemed like just the ticket for my aching bones. But it was not to be. My travel companion, Serge Dupraz, still had a few surprises up his sleeve.

"Let's stop for dinner at Aix-Les-Bains," suggested the wily Savoyard. "There's a friend there I want you to meet."

We'd been cooped up in his rented truck for nearly 10 hours straight. We'd gone from palm trees and Mediterranean breezes to yew and pine and a brisk alpine wind. I was ready for a break. Besides, it would be a much-needed opportunity to stretch my travel-folded legs. I mean, the spartan nature of the truck's cab made a third-world bus seat look luxurious in comparison...

"Are you suggesting a real, sit-down meal," I asked with just a squeeze of irony to my words. "At a restaurant and everything?" It seemed we'd been eating truck-stop sandwiches and drinking bad coffee for weeks.

Serge laughed. "Mais bien sur," he said. "You know I have your best interests at heart."

So we stopped in Aix. Lucky we did.

The man I was about to meet was legendary snowboarder Dédé Maszewski. A former world champion and one of the smoothest freeriders on the planet, Maszweski had grown up at La Clusaz — the same mountain town that nurtured such French skiing luminaries as Edgard Grospiron, Candide Thovex and Seb Michaud. And yet — though his riding pedigree was as golden as they come, the man himself was as easy-going and approachable as the kid next door.

"So glad to meet you, Michel," said the still-youthful 40-something as we joined him at one of the lakeside restaurants this classic spa town is famous for. His smile reached out and pulled me into his orbit. "It's a real pleasure, you know," he continued. "I've heard so much about you."

Say what? Me? But I didn't get to explore that subject much further. Because Dédé had already pulled out his laptop and was regaling us with tales of a killer powder session he'd had earlier that day with his 13-year old son, Timo, at their home hill of Les 7 Laux. There hadn't been any new snow in the Alps for weeks, he explained, and this late in the season most riders had given up hope. But the powder gods still had a little spring magic on offer and the mountains had received a 40-centimetre dump of cold winter snow the day before. "It was just amazing," he said. "Some of the best riding of the season."

And it was obvious from his pictures that he wasn't exaggerating. I tried not to salivate. Tried not to grind my teeth in frustration. But my envy was all-to-obvious. I'd left Whistler during one of the best March storm cycles the resort had ever experienced. And though my passion for new mountain adventures compensated somewhat for the dry conditions on the continent this month, I was tired of riding groomers. Really tired.

I'm not sure if the plan had already been cooked up by Serge and Dédé beforehand. Not sure really if I was totally played that night. Whatever. But by the time Dédé mentioned offhand that the upper half of Les 7 Laux hadn't yet opened and the next day was forecast to be sunny, well, to be honest I was sucked in like dust in a vacuum cleaner.

"So Michel," he said casually. "My schedule is pretty open tomorrow and I was thinking of going back up for another go at the mountain. The riding is going to be off the charts." He let a beat go by. By then, I kinda knew what was coming. "Do you think you might be interested in joining me for a friendly powder session at one of France's 'secret' resorts?" he asked. "I'd love to show you around the place." And then he'd set the hook. "You can even stay at my place tonight. That way, we can get an early start on the day."

I wanted to scream 'Yes.' Wanted to jump up and hug him. But I had responsibilities. "We've got a lot of work tomorrow," I countered. "It's a great offer and everything, but I can't leave Serge holding the bag like that..."

Serge only laughed. "Go ahead. Say yes, you goof. I can survive without you for a day."

And that's how I found myself spending the night in Aix-Les-Bains, the honoured guest of a man I'd only met that evening. I love travelling...

Still, I slept fitfully. The thought of a sunny powder day kept intruding into my dreams. I couldn't wait to put my skis back to work. Couldn't wait for that ineluctable feel of light snow and steep grades. The morning couldn't come soon enough. But would the day meet with my expectations?

You know when somebody makes a big claim, and you kind of downgrade it so you won't be disappointed? You want it to be good, you'd love it to be good, but you've been down that trail before. So you mentally prepare yourself for less than what was promised. Well, that's sorta what I did with Dédé. Could conditions at Les 7 Laux be as good as he said it would be? Maybe. But I had my doubts. I mean, France hadn't had new snow in over a month. People were already thinking of putting their boards away for the season. Could one March storm really change all that? I wasn't convinced.

Man, was I wrong! Our day at Les 7 Laux was everything Dédé had said it would be. And more. From the first run, I knew we were in for a good time. The sun was shining, the snow was glittering and there was virtually nobody else on the hill…

Perched high above Grenoble (less than a 40-minute drive from downtown), Les 7 Laux is a quiet, local's place; a world apart from the big go-go resorts that dominate France's ski resort scene. But what it lacks in flash, it makes up for in soul. And the physical plant — wow! This is classic big-mountain skiing in a little-resort format.

And without the usual hordes to track up the place. By the time the upper mountain was deemed safe to ride by the resort's pisteurs, we were well warmed up. We'd skied a few lines on the lower slopes, and the conditions we found there had confirmed my initial assessment. The snow was winter cold! Light as a feather. Inviting. Happy. S-w-e-e-e-e-t.

Still, the day wasn't won. "It's not going to open for another hour," grumbled Pouta's lift attendant as we joined the little posse waiting for a ride up. But there was a hint of mischief in the ol' liftee's eyes. Everyone else in the lineup took him at his word and rode off down the hill. I looked at Dédé. He looked at me. "We're staying," we both said in unison. Five minutes later, the lift started to roll. We were on our way...

First on the agenda was a long run down Les Vallons Du Pra — close to a thousand vertical metres of untracked snow. Who could have guessed that conditions would be this good nearly two days after the storm? Being the gentleman that he is, Dédé let me have first tracks. And I took full advantage of his largesse. Turn after turn of untracked fluff. Turn after turn of sensual pleasure. My skis ate up the vertical like thirsty demons. I could feel my smile inching up around my ears. Was I dreaming? Felt like it.

"What do you think?" asked Dédé at the termination of our run. "Should we do it again?" Heck yeah! And back up we went.

I love riding a big mountain with locals. It's like the ultimate backstage pass. No wasted time. No wasted effort. It's quality, quality, quality. And this day was no different. "Do you mind climbing for 10-15 minutes?" my guide asked me after our second Vallons. "There's a beautiful run I want to show you, but it's a bit off the beaten path. Still, it'll be worth the walk for sure. And I bet you we'll be setting first tracks yet again."

I just nodded. Bring it on!

It's a steep climb to La Combe de Bedina — and a wee bit exposed — but it's worth every step. The scenery takes your breath away. It's a mountain wonderland of snow and rock and vertiginous gullies as far as the eye can see. And quiet. Oh-so-quiet. As we stood on the ridge, looking down at the already-green valley of the Gresivaudon and the spreading urbanity of Grenoble far below us — already fantasizing on how good our flight down Bedina would be — I couldn't help but reflect on the good fortune that brought me here today.

Great friends. Wonderful conditions. And an old school mountain scene that's as soulful as it is rare. Thank you Les 7 Laux. Thank you Dédé Maszeswski. I feel entirely refreshed.