Opinion: Peaceful protests vs. mob riots, and the reasons behind them

Let’s be upfront as we talk with our kids about the shocking events in the United States this past week.
Jan 10, 2021 9:31 AM By: Guest Columns 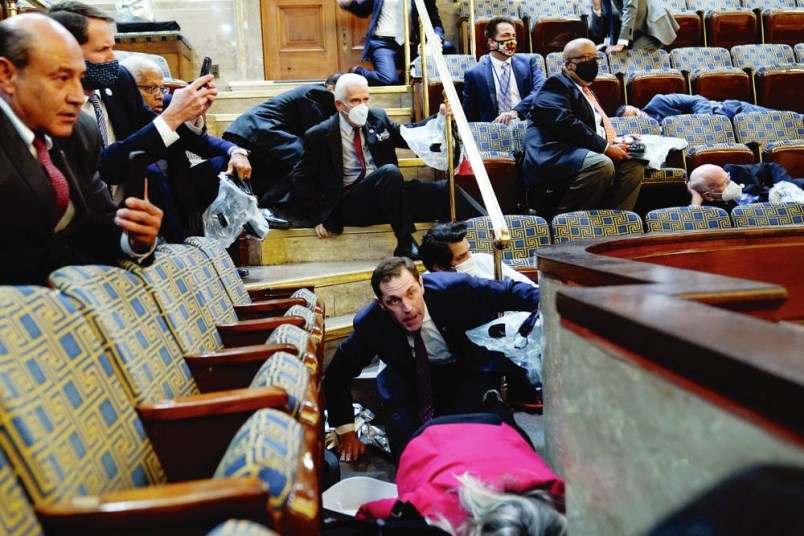 People shelter in the House gallery as protesters try to break into the House Chamber at the U.S. Capitol on Wednesday, Jan. 6, 2021, in Washington. (AP Photo/Andrew Harnik)

Let’s be upfront as we talk with our kids about the shocking events in the United States this past week.

The right to protest is an important part of Canadian history and democracy, along with the right to free expression. It is important that our kids understand that.

But what is way more important for our kids to recognize is the difference between freedom of peaceful assembly and what they witnessed on the news channels — a lawless mob bent on violence and destruction invading the home of U.S. government — and to understand the psychology behind irrational mob events like that.

Section 2 of the Canadian Charter of Rights and Freedoms guarantees freedom of expression, freedom of association and freedom of peaceful assembly. Peaceful protests, historically, are a way for people to express themselves for or against decisions made by government.

But what our kids saw went beyond political differences. They witnessed the results of the cultish influence of an out-of-control, mentally unstable demagogue on his followers. Even that may be an overly simple explanation of what occurred in Washington D.C.

People who research these events describe the Washington insurrection as a classic example of herd, mob, pack or gang mentality — call it what you will, but all describe how people can be influenced by their peers to adopt certain behaviours on a largely emotional, rather than rational, basis.

Some of the people interviewed in Washington could not explain why they were there or what their goal was beyond an opportunity to riot and vandalize.

We saw that in Vancouver on the evening of June 14, 1994, when the Vancouver Canucks lost a hockey game to the New York Rangers.

In 2011, again because of a hockey loss, a mob riot in Vancouver saw at least 140 people injured, including one critically.

At least four people were stabbed, nine police officers were injured and 101 people were arrested.

Four years after the 2011 riot, police finished their investigation and recommended the final charges against two suspects, bringing the total to 887 charges against 301 people.

Again, as with the Washington rioters, many of those people could not explain why they were there or what the issue was.

A peaceful protest that descends into a window-smashing, vehicle-burning, police-bashing riot might provide an outlet for those who believe, for whatever reason, that they have little other political recourse.

It is more likely, however, that when individuals are affected by mob mentality, they make different decisions than they would have individually.

Senior criminal justice lecturer Carly Lightowlers of the Department of Sociology, Social Policy and Criminology at the University of Liverpool has devoted a great deal of thought to “mob” events as opposed to peaceful protest.

Her findings suggest that riots and rebellions are extreme acts committed only to convey what has been repeatedly brushed aside by the powers-that-be.

A quick glance at the reasons behind the riots that led to the French Revolution of 1848, or even the 1885 North-West Rebellion of the Métis in Saskatchewan, seems to support that theory.

The 1910-1920 Mexican Revolution that overthrew the dictator Porfirio Díaz, or the Tiananmen Square protests of 1989, or the demonstrations in East Germany were responses to politically and economically bankrupt states that restricted the right to express an opinion without fear of retribution.

Those demonstrations were not about a hockey team losing a big game or a request by legitimate health authorities for individuals to participate in protecting a community against the spread of an increasingly lethal virus by wearing a protective cloth mask in crowded indoor spaces.

As a final caution to kids who might become involved in some kind of peaceful, legitimate protest, researchers at Leeds University have published findings on how protests can quickly become lawless mobs.

The results of the Leeds experiments demonstrated that it only takes five per cent of confident-looking and carefully prepared provocateurs to influence the behaviour of the other 95 per cent of people in the crowd.

In the Leeds experiments, 200 volunteers fell into this trap without even realizing it.

Peaceful protest can, apparently, be that fragile.

Geoff Johnson is a former superintendent of schools. gfjohnson4@shaw,ca