OPINION: This is what it's like to fly across the country during the COVID-19 pandemic 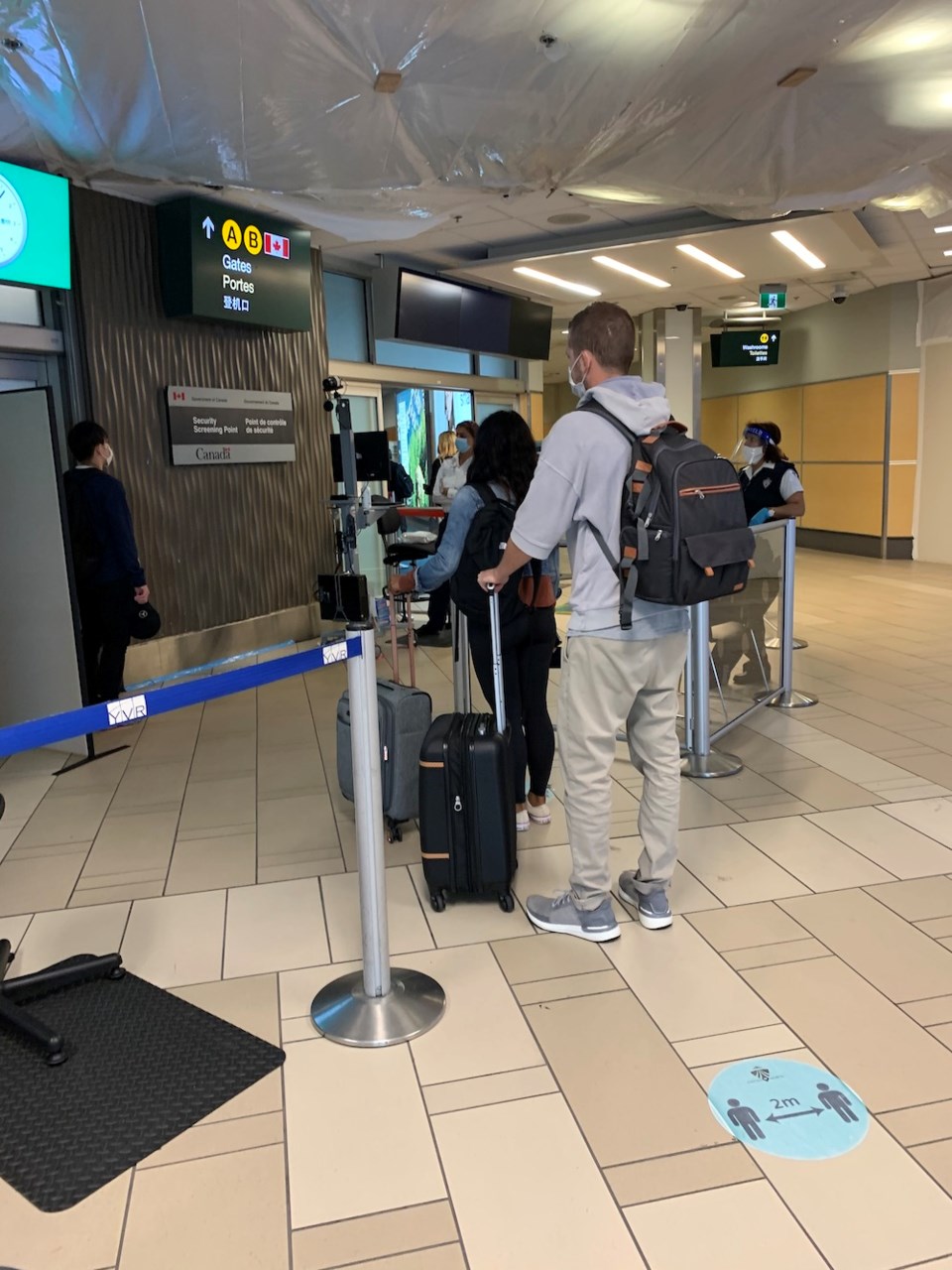 The pre-security temperature check at YVR. Photo by Megan Lalonde
This week, I did something I haven't done in one entire year: Stepped foot onto an airplane.

Since moving to B.C. from Ottawa over four years ago, I typically fly back home to Ontario two or three times a year to see family, friends or witness someone I know getting married. But, when the pandemic hit, every one of the five weddings I was supposed to attend this summer were postponed, as were any travel plans I had to go home for a visit.

I'll preface this by acknowledging that not everyone reading this will agree with my decision to get on a plane for non-essential purposes during a pandemic. I get it—I don't even know if I agree with my own decision.

But I hadn't seen most of my family or my closest friends in over a year. With no one knowing when this pandemic is going to come to an end, the idea of not knowing when I was going to see them next was becoming increasingly difficult to wrap my head around. As cases began slowly declining earlier this summer, it became obvious that I was going to have to be willing to risk being exposed to COVID-19 in a flying test tube in order to eat my mom's cooking this year.

However, now that working from home is an option, I can work from my parents' house and stay for a longer period of time than I've been able to in years. No one in my immediate family is considered to be high-risk, and I made sure everyone I'd be in contact with upon arrival was comfortable with me getting on a plane to come see them. And, for the record, these flights were booked while cases were still on the decline.

As this pandemic has progressed, we've all been trying our best to figure out how to maintain any shred of normalcy and sanity while staying as safe as possible. This is my best attempt at doing that.

So, if you're curious about what it's like to get on a plane these days, here's what I noticed.

In an effort to spend the absolute minimum amount of time on public transit possible, considering I was about to board the riskiest form of public transportation that exists right now, in my mind, I drove myself to the airport after finding an absolutely bonkers deal for long-term parking at one of the value lots. As per usual these days, I wore a mask and the office attendant stood behind a plexiglass barrier, while the employee who helped with my bags put on a fresh pair of gloves before reaching for them.

The shuttle to the terminal is only called when it's needed, and there were only three of us aboard the vehicle.

Based on my consultations with a few friends who had flown out of YVR recently, coupled with a series of Instagram stories the day before from one account I follow, I was expecting the airport to be a ghost town.

Boy was I wrong.

It wasn't peak holiday-travel-level busy, but aside from the fact that everyone over the age of one was wearing masks, I wouldn't have known there was an ongoing pandemic by volume alone. That also could be due to the fact that a large portion of travellers seemed to be students heading to university—I definitely noticed a few parents saying their goodbyes in the airport, rather than the curb.

Before the flight, I received an "important notice" emailed from the airline explaining again that I may not be permitted to travel if I have a fever, shortness of breath or a cough, or have been denied boarding due to these symptoms in the last 14 days, unless I can produce a medical certificate.

"Additionally, you may be subject to preventative measures imposed by a national, provincial and territorial government at your final destination," it read. "Air Canada requires pre-flight infrared temperature checks and all customers to wear face coverings over their mouth and nose while at check-in, during the boarding process and during flight. Further information on travel requirements as well as changes to our processes are available on our website.

"By checking-in and boarding a flight, you acknowledge your understanding of the restrictions in place and confirm none are applicable to you or your travel."

I had already checked in online and had my boarding pass ready to go on my phone, so checking in a bag was a pretty quick, standard process. But upon arrival at the security entrance for my gate, a guard was turning people around towards an alternate screening area. "The line is shorter over there," she explained. There were no Nexus or pre-screened lines available at the security entrance as per usual, so if you're accustomed to flying as part of that program, be sure to plan accordingly for a few extra minutes in line.

Before entering the security zone (but after walking through a good portion of the airport already) you have to pass a temperature screening. You stand on a sticker while an overhead thermometer of some kind scans you, and a security guard calls out, "next... next...," over and over. No one explained what it was, I only realized it was the infrared temperature check after looking back and seeing a screen that read, "Temperature good."

Thinking about it now, I would be really curious to see what happens if someone doesn't pass the temperature check. Are they immediately escorted away? Is it a Will Smith/I Am Legend, "Check her again!" situation?

Once in line, people weren't necessarily obeying the signage stuck to the floor and standing two metres apart, but they also weren't packed as closely together as usual. I only saw one traveller wearing a pseudo-hazmat suit, but another was wearing a clear plastic rain poncho over his clothes. I'm still curious about how protective that would be against a virus, but whatever makes you feel safe, I guess.

Everything seemed to be the same as usual once you get to the bag scanner and metal detector, except for the fact that everyone in line had a bag diverted for a secondary check by a security agent. Mine was apparently due to the bottle of hand sanitizer I had placed in the bin, next to my carry on, that needed to be "tested."

I arrived at my gate a few minutes after boarding started, but aside from the fact that you had to pull down your mask so the gate agent could identify you, from what I could tell nothing about that process had changed since COVID-19, either.

Most of YVR's stores and food service locations seemed to be open as well, if you needed to buy anything before your flight.

Getting on the plane

My direct flight to Ottawa was nearly full. While the middle seat next to me was mercifully empty, most throughout the plane seemed to be filled. Everyone aside from two small children I saw wore masks, and a couple of people wore protective safety goggles as well.

The overhead announcements seemed to be the same as usual, with the added information that passengers are required to wear a face covering for the duration of the flight, and a request for passengers to avoid congregating in aisles due to the pandemic. Flight attendants came around and passed out pre-packaged kits with a mini water bottle, pretzels, gloves, an extra mask, hand sanitizer, anti-bacterial wipes and headphones. They also did regular beverage service, but did not have any food available on the plane. (So if you're jumping on a longer flight, be sure to pack some snacks!) I may or may not have used the sanitizer every time I touched anything that did not arrive at the airport in my backpack, including the screen in front of me.

The mask I wore was pretty comfortable and didn't bother me to wear for hours on end. The only dilemma I really faced was when I got thirsty and felt like cracking open that water bottle. Do I pull my mask up every time I needed to take a sip? Do I pull it down? Do I just take it off for a few minutes? No one prepares you for this! I settled for pulling up my mask while I was drinking, but took it off for maybe five minutes to inhale the food I brought once I got hungry enough.

Arriving at your destination

Once we landed, people still stood up right away, grabbing their bags from the overhead bins and waiting impatiently for the plane door to open like they were competitors on the Amazing Race—there was no phased disembarking or any other new protocols.

It was a pretty similar sight at baggage claim, where any physical distancing stickers stuck to the ground were entirely ignored in favour of clustering together as close as possible to the carousel. While there were several people with signs waiting for loved ones in the arrival areas, I opted to meet my family outside.

Overall, it felt a little post-apocalyptic-y and slightly more stressful than usual due to the heightened risk, but otherwise not that much different than a regular travel day. I won't lie and say I'm not a little nervous to see whether my flight will pop up on the BCCDC's public exposures list in the next week or two, or that the safety procedures in both the airport and aboard the plane weren't a little underwhelming. However, I still feel like the risk hopping on a plane was well worth the reward, in my case.