For years Canada and Canadians have been taking about addressing systemic racism and intolerance—now it's time to act
Jun 25, 2020 9:01 AM By: Clare Ogilvie 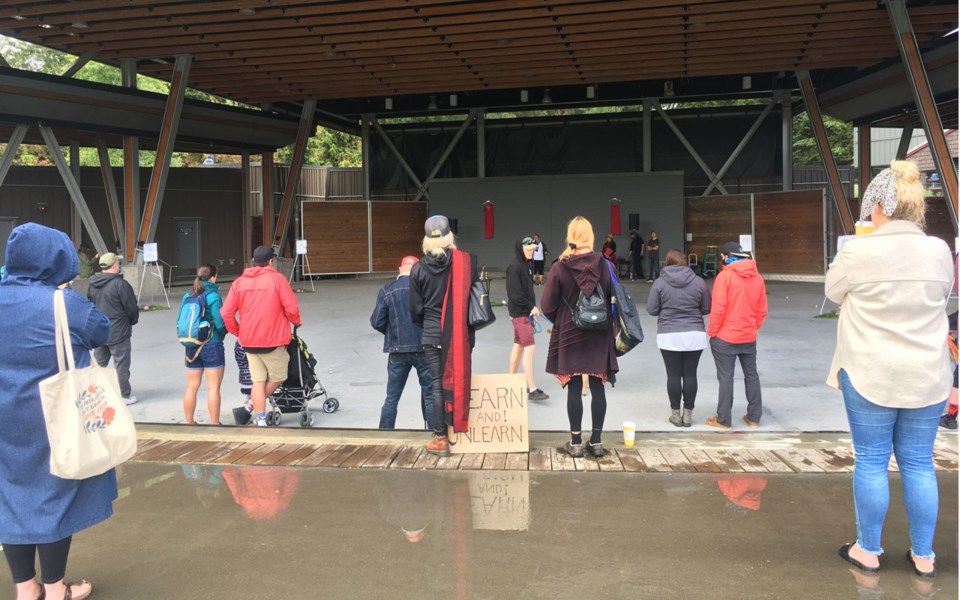 About 75 people gathered to join in the National Indigenous Peoples Day vigil at Olympic Plaza on June 21. Photo by Clare Ogilvie

One door is closing and another is opening—we are moving forward into an opportunity for change that has rarely been seen in this generation.

In many ways, we are embarking on a new chapter of our lives.

This week, as I thought about my “Opening Remarks,” I was thinking of our Whistler Secondary School convocation in these pandemic times and how graduation itself marks the passage of youth into a new chapter of their lives.

But, like many Canadians, my focus is constantly being drawn to the shifting societal landscape of the world around us, and in particular the acceptance that racism and intolerance in all its forms is part of the Canadian experience.

It’s easy to point south of the border and say racism is an American phenomenon, which makes it oh-so comfortable to feel a bit superior.

But it feels like finally Canadians are recognizing that Canada is not immune to these problems.

At the vigil this past weekend to mark Indigenous Peoples Day, eight Indigenous Canadians who have been killed by police since early April were honoured. Around the outside of the gathering area, photos were placed telling the story of each of them.

Attendees were invited to share comments, and what was common to all, including the organizers of the day, was that now is the time for action. We are finally moving beyond the time for just words.

Has it taken a pandemic for us to face the injustice of what First Nations people and those of colour face living in one of the most-blessed countries in the world?

Our grads are facing some huge challenges and opportunities as they head out on this new chapter of their lives.

I would suggest that we are in the same situation today in facing up to systemic racism in Canada. We have a chance to start a new chapter in Canada’s history, moving forward together and creating change—but it has to come from every one of us.

While it is imperative that governments at every level address the structure and processes that make racism systemic, the change won’t be systemic if it is not embraced by all of us.

At the very root of this change must be education.

I wonder how many know that there are 11 drinking-water advisories within 10 Indigenous communities in B.C. The Trudeau government made an election promise in 2015 that all long-term water advisories for First Nations in Canada would be lifted by March 2021. At that time, there were 105 long-term drinking water advisories on reserves—“long term” meaning a year or more.

Did you know that the word for the RCMP in the Carrier Nation is nilhchuk-un, which means those who take us away?

Said Terry Teegee, the Regional Chief of the B.C. Assembly of First Nations in an article in Pique this week, “parents saw the RCMP as the ones who took our children away to residential school.

Let that image settle as you look at your graduate, or your kids who are yet to graduate or have graduated.

It’s long past time for all of us to understand the tragic impact racism has and for each of us to commit to change.

EDITOR’S NOTE: Pique is excited to share with both our online and print readers that we are updating our website in the next several days. Along with a brand-new look, the site will offer a faster, more streamlined user experience. This will make accessing the important news and information you need and want across all devices much more user-friendly. Pique will continue to focus on delivering the content you want, whether that is local news from Whistler and Pemberton or extensive coverage of the arts, sports and events from around our town and corridor. All our columnists will be there as well. But there will be enhanced content, too, with B.C., national and international news readily available. n