Franz Wilhelmsen was understandably pleased when his Garibaldi Lifts. Ltd. secured the rights to develop Whistler Mountain for skiing in the early1960s, but he was shocked to discover the company didn't own any land at the base of the mountain.
Aug 12, 2015 6:00 PM By: Bob Barnett 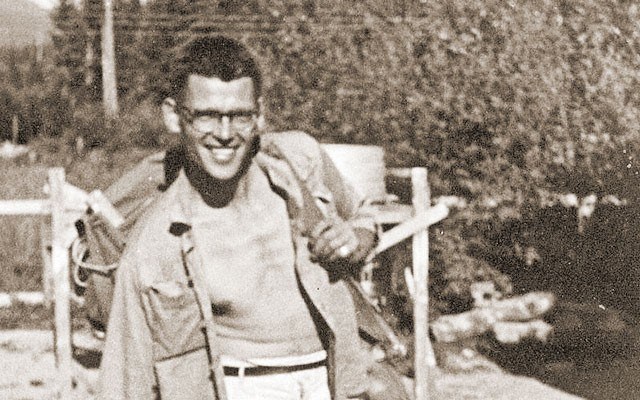 BACK IN TIME Peter Alder, pictured here in Squamish in the 1950s, was one of the architects of today's Whistler. Photo submitted

Franz Wilhelmsen was understandably pleased when his Garibaldi Lifts. Ltd. secured the rights to develop Whistler Mountain for skiing in the early1960s, but he was shocked to discover the company didn't own any land at the base of the mountain.

It took a while to accept that Peter Alder's group, Garibaldi Recreations Ltd., had scooped up the Jordan's Lodge property when Garibaldi Lifts inadvertently let their option on the 160 acres between Alpha and Nita Lakes expire.

Finally, the lift company secured an agreement with the province to lease enough property at the base of the mountain to develop offices, ticket facilities, a cafeteria, the gondola barn and a parking lot. Accommodation was left to others to provide.

What would the Jordan's Lodge property — today's Creekside — have looked like if Peter's group had been able to work with Garibaldi Lifts? Keep in mind the lift company was challenged just trying to convince investors that it could turn Whistler Mountain into a viable ski area. A handful of Vancouver skiers backed the project with their own money — $500 per unit, which included four class A shares and one common share. But after a couple of years of soliciting investors, and several deadline extensions, Garibaldi Lifts Ltd. was still well short of its target of $800,000. It wasn't until the fall of 1965, when Montreal's Power Corporation bought the final 560 units of stock, that the company reached its fundraising goal.

Meanwhile, the provincial government was still working to provide basic infrastructure to the valley in time for Whistler Mountain's scheduled opening in December 1965. The extension of the highway from Squamish to Pemberton was finally completed that year. And while Peter's transmission lines had carried electricity through the valley for years, Whistler didn't join the province's electrical grid until 1965.

In this context, Garibaldi Lifts was at full capacity just cutting trails, building the first four lifts and a few support buildings in time for the first skiers in the winter of 1965-66. Real estate development was left to others like Sandy Martin and Eric Beardmore who were involved in developments such as the Whistler Alpine Villas condos, the Cheakamus Inn, Highland Lodge and the Alta Vista subdivision.

All of these first developments were on lands north of the Jordan's Lodge property, and therefore not as close or convenient to the Whistler Mountain gondola as they might have been.

A 1963 letter from Garibaldi Recreations Ltd. to the Ministry of Recreation and Conservation indicates what Peter's group had in mind. The letter states that the Jordan's Lodge property owners "...have drawn up plans for a new and larger lodge together with dining facilities and a cocktail lounge. We also will be erecting up to 40 peeled-log motel-type units..." As well, single-family lots and summer campsites were planned.

While these negotiations with the province and Garibaldi Lifts Ltd. were going on between 1960 and 1964, Peter's own affairs had changed. His Paco businesses were doing well but in the summer of 1960 a man had walked into his office and asked, "Would you like to sell your companies or would you like to have competition?" Peter didn't have much choice. Having borrowed heavily to buy the cement plant equipment, he decided to sell.

But the very same day he made the decision to sell his companies Peter saw an ad in a newspaper for ski area manager at Red Mountain in Rossland.

"So I wrote an application that night and sent it in," he recalled. "I was asked to come for an interview. I didn't realize that 210 other people had applied for the job. But I guess my bullshit was better than anybody else's. So I got the job."

In October of 1960 Peter moved his family to Rossland and he became the first professional manager of Red Mountain. But he actively maintained his interest in Whistler, commuting across half the province on weekends to work on the Jordan's Lodge property. Finally in 1965, with Garibaldi Lifts Ltd. about to open Whistler Mountain and development options limited, Peter and his Garibaldi Recreations group sold the Jordan's Lodge property to John Taylor.

Peter's final dig at Franz Wilhelmsen was opening the new Granite chairlift at Red in November 1965, more than a month before Whistler Mountain opened to the public in January 1966.

Peter spent the next decade-and-a-half managing Rossland, then Silver Star and Big White ski areas before going to work for the province's lift inspection department. There, his work in solving a grip problem that made a chairlift used by several B.C. resorts unsafe caught the attention of Whistler Mountain's parent company. The board of directors was so impressed they told Franz Wilhelmsen to hire Peter.

So in 1978, nearly 18 years after Franz kicked Peter out of his office, Peter Alder returned to Whistler to become general manager of Whistler Mountain and vice-president of Garibaldi Lifts Ltd.

In 1980 Peter was elected to the board of directors and appointed senior vice-president of the re-named Whistler Mountain Ski Corporation. In this role he was responsible for upgrading the ski area — which was about to face competition from the upstart Blackcomb — and planning construction of new lifts on the north side of Whistler Mountain that would serve the fledgling Whistler Village, where attention would be focused for the next 20 years.

Meanwhile Creekside, as the Jordan's Lodge property came to be known, languished for another 20 years.