7,022. At press time, that's how many people had taken the time to sign a petition asking Vail Resorts to address concerns skiers and boarders have with Whistler Blackcomb (WB). The change.
Feb 12, 2020 11:00 PM By: Clare Ogilvie 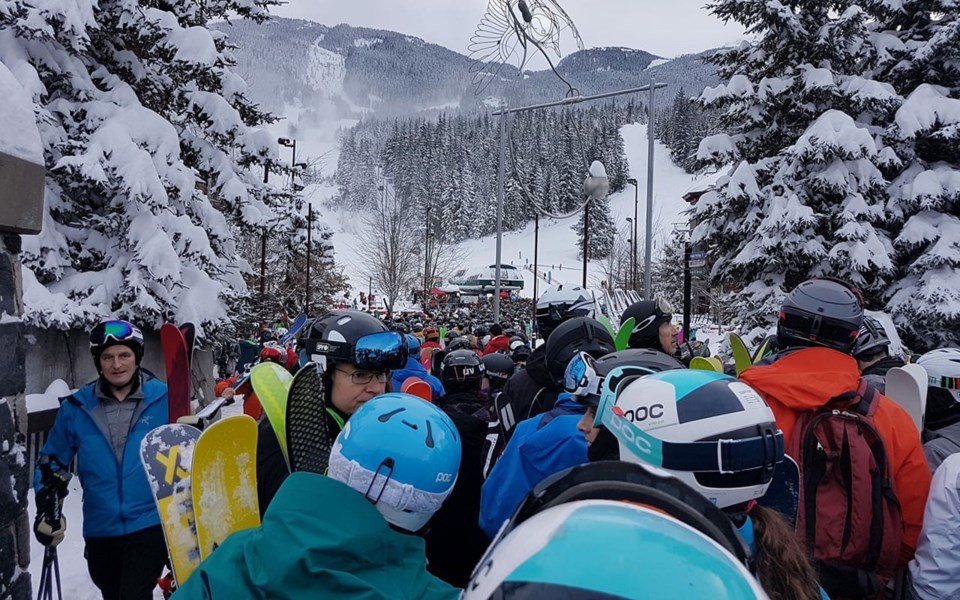 At press time, that's how many people had taken the time to sign a petition asking Vail Resorts to address concerns skiers and boarders have with Whistler Blackcomb (WB).

The change.org petition—titled Vail Resorts: Make Whistler Great Again!—was started on Feb. 1 by two people who are passionate about our mountains with the initial goal of getting 500 signatures. Now, the goal is to get 7,500 to sign the petition and it looks like they are well on their way.

The point of the petition is not just to gripe about the issues skiers and boarders are experiencing at Whistler Blackcomb this season, it's to get the attention of WB's owner, Vail Resorts (VR), and its shareholders and say, "Hey, look over here. Things are not as they should be and you need to pay attention before it's too late."

This is not about just one thing; it is mountain users venting their frustration borne out of many different issues over the last few years. It is the small things (the cleanliness of washrooms, staff misinformed about service policies, the Vail Resorts mountain app EpicMix using imperial measurements), as well as the big things (weekly lift and gondola delays and stoppages, the lack of communication with the thousands stranded in lift lines, U.S. pricing in a Canadian resort, the high price of tickets, poor grooming) driving the actions of those who are signing.

It would be easy to dismiss the petition as just chatter, but that would be a mistake. At least 20 per cent of those who have signed are from out of country and many of those have indicated they are not coming back to Whistler—and they will probably tell their friends.

All of Whistler needs to be paying attention to this—we are all in this together.

Leaders at WB say they are listening—we hope that's true. Action is needed.

It's true this year has been one for the record books when it comes to weather-related issues. The late opening of the alpine, 477 centimetres of snow in January followed by 155 millimetres of rain and howling winds whipping granular ice-sand into every nook and cranny of every lift and gondola, including the barns and towers, resulted in new procedures at the Peak 2 Peak gondola and other operational lessons as well.

WB operations did plan ahead for the storms—gondolas/lifts were kept running 24 hours a day in some cases to prevent ice build-up for weekend powder hounds salivating to ski and ride after months of less than perfect mountain conditions—but what Mother Nature has thrown at us so far has been a new unknown.

On-mountain workers and patrollers have been absolutely heroic in their efforts.

But the hand dealt to the operations team seemed to be stacked with plenty of wildcards this year and the multiple and frequent delays for avvy control, the manual removal by rubber mallet of ice from lifts and gondolas and the thousands of kilometres of lines and electrical issues have resulted in public outcry.

However, weather doesn't explain why last weekend, after only a few centimetres of snow fell and Saturday was a bluebird day, some lifts opened late and others continued to experience slowdowns. On Saturday, 7th Heaven was supposed to open at 9 a.m. but didn't get up and running until 10:40 a.m. with no explanation offered.

Twitter is the main source for operational updates these days and it's been great to have the continuous flow from #WBOps about what's happening, but it made people cringe that, throughout the stream of information about all the closures and slowdowns, Vail Resorts' Colorado-based PR team was posting endless messages about how amazing it was in Whistler and encouraging people to get on the mountains—oblivious to the 4,000 people lined up at Skier's Plaza waiting for the Village Gondola to open.

There is no doubt that WB offers the most epic of skiing and riding experiences, but Vail Resorts can't keep charging champagne prices for a no-frills experience.

We know that the men and women of WB are doing their very best in trying circumstances to keep the mountain experience second to none (FYI: booing uniformed WB staff is a disgraceful thing to do). We are told that the head of operations and patrol are making decisions in the same way as before VR's takeover of WB, and that staffing levels are consistent with pre-sale days—but still, we are left asking if something is rotten in the state of WB?

Say what you might about ski-resort rankings, the reality is that for years WB was ranked No. 1. but now we're slipping—the latest Forbes/ZRankings have WB at No. 7 this year while last year it was sixth.

Something needs to be done before we slip even further.

PIQUE'N YER INTEREST: COVID is putting Whistler’s distinct brand of doublespeak to the test
Nov 21, 2020 8:00 AM

LETTERS TO THE EDITOR:  Take time to recognize the efforts of local health workers
Nov 19, 2020 7:15 AM
Comments
We welcome your feedback and encourage you to share your thoughts. We ask that you be respectful of others and their points of view, refrain from personal attacks and stay on topic. To learn about our commenting policies and how we moderate, please read our Community Guidelines.