"The only people for me are the mad ones, the ones who are mad to live, mad to talk, mad to be saved, desirous of everything at the same time, the ones who never yawn or say a commonplace thing, but burn, burn, burn, like fabulous yellow roman candle
Aug 8, 2008 9:15 AM By: Michel Beaudry 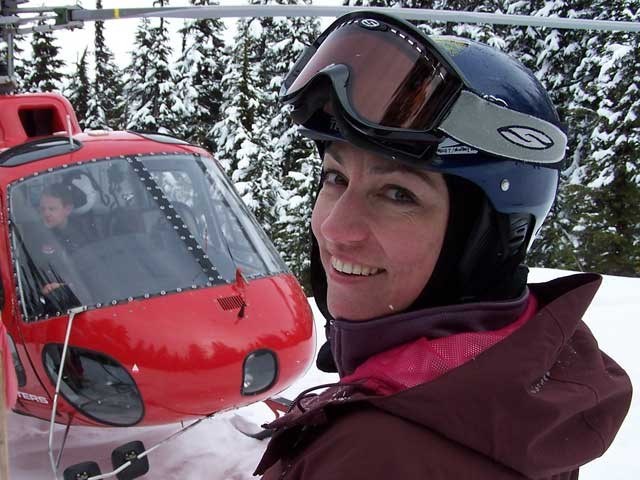 "The only people for me are the mad ones, the ones who are mad to live, mad to talk, mad to be saved, desirous of everything at the same time, the ones who never yawn or say a commonplace thing, but burn, burn, burn, like fabulous yellow roman candles exploding like spiders across the stars and in the middle you see the blue centerlight pop and everybody goes 'Awww!'"

I don’t know if it’s proper Facebook etiquette or not, but I just had to borrow the Jack Kerouac quote from Phoebe Phoenix’s site for this story. Why? Because, in my opinion, nothing I could write better describes this transplanted Aussie than this one-sentence paragraph written by the King of the Beats…

Ever been to a Fire & Ice Show in the Whistler towncentre? Ever watched, mesmerized, as the fire dancers twirl and twist and jump and play with burning apparatuses only inches from their bodies? Courting disaster, stepping off the edge, pushing the boundaries of the possible with every move they make? If you have, then you’ve seen Phoebe.

“We killed it this year,” she says, enthusiasm splashing from every word. “Especially with two towers, you know, the one that has two groups of spinners with two people on bottom, and one person on top. We do a lot of two person interweaving moves that no one else is doing.” She stops. Takes a breath. “It’s a great way to get a ski pass!”

She’s a force of nature. A laughing, talking, smiling, whirling, wonder of a woman who cherishes every breath she takes...

And I love the paradox that Phoebe represents. She’s real, grounded, and totally dependable. Yet she plays with fire. She loves math and numbers and ledgers and deadlines. Yet she considers herself an artist. She grew up in a semi-tropical environment — the Sunshine Coast of Queensland — and loved her childhood summers on a sailboat. Yet she took to the snow like she was born to it — gets up the mountain every day she can — and snowboarding is now the passion that keeps her in Whistler.

“I have this theory on birth dates,” says the thirtysomething Pemberton resident with just a hint of a mischievous smile playing on the edge of her features. “If you’re born in the summer, you’ll turn out to be a summer person. But if you’re born in the winter, well, winter will become your thing…”

Is it really that simple? Is that really how an Aussie non-skier from the tropical northlands ended up spending the last 14 years of her life in Whistler?

Pretty much, she admits, only with a few unforeseen twists and turns along the way….

“It’s a funny story actually,” she says. “I was on my way to Europe and stopped off in Toronto to see my Godfather.” The smile broadens into a wall-to-wall grin. “When I left Brisbane, it was 25 o C. When I stepped off the plane in Toronto it was –25 o C. I didn’t know what hit me. And I realized: I love the cold!” She laughs. “I’d never seen snow before landing in Toronto. It blew my cotton socks right off. And it fell from the sky…”

Dazzled by her first Canadian experience, she vowed to return. Three years later, the 22 year old got her opportunity. But this time she landed in Vancouver. “I was planning to spend a week there,” she explains. “But that week turned into five months.”

Down to her last $400 and with no plan for the future, she decided to go shopping — “As you do,” she chuckles — and was offered a job in the first store she visited. “That was my first and only retail job,” she admits. Little did she know it would change everything.

“One of the guys I worked with invited me to go camping with him and his friends at the hot springs at Meager Creek,” she recounts, and giggles. “So there I am, in a car with five gay guys going up Highway 99 for a weekend camping trip. Suddenly we drive through Whistler. I was in awe. Where am I? What is this place? It looks like Austria but they all speak English!”

Phoebe knew, somehow, that this Whistler place was going to play a role in her life story. “I went straight back to Australia to make some more money so I could come back to Whistler for the ski season. I was hanging out with a friend and we were talking about life. I told her: ‘Ask and you shall receive — that’s how the universe works.’ And to press my point, I also told her what I was asking for in a partner; someone who was gentle, strong, kind, hard-working and loved me to death.”

A week later she was back in Canada, back in Whistler and hanging out at Jimmy D’s. “That’s where I met my husband,” she says. “And he was exactly what I’d asked for: gentle, strong, kind, hard-working and he loved me to death.” She smiles, if only just a bit sadly. “We were married in the fall of ’95, had a construction company, a farm, a child and 12 happy years later, we divorced…”

Divorced? “He’s a great guy,” she says of her former husband. “Just not my guy. Besides, my list is a little more detailed now.”

This parting of ways also led to a name change — and some might argue a bit of a life change too. “‘Phoenix’ is not the name I was born with,” she explains with a straight face. “Nor is it the name on my passport. But the summer of my divorce, I realized I’d become a different person.” Hence the different name. And given Phoebe’s success with the whole fire-dancing thing, borrowing her new name from that great mythical bird associated with rebirth and fire seems entirely appropriate. But nothing is ever that simple — especially not with Ms Phoenix.

“One of the big reasons I decided to go with Phoenix,” she says, “is that I found people could never spell Phoebe correctly. Now, I figured, there was a chance they might get the whole p-h-o-e thing…”

Indeed. And this is the whole secret to understanding Phoebe. She works with both sides of her brain! Trained in international business, she runs a bookkeeping and small-business consulting firm by day — “I work mostly with construction companies and retail outlets,” she explains — and by night she spins fire, with poi and double hula hoops and fans and staffs and ropes and…

“My two best subjects in school were accounting and art,” she says. “But at one of my first shows — back when I was only 17 — a graphic artist told me: ‘Don’t take a job in graphic art. It will kill you. Get a straight job and do your art on the side.’ So I heeded her words and when I went to uni, I focused on commerce and business…”

It has served her well. Especially in helping her get established at Whistler. But where in the heck did she pull fire dancing from? It was the summer of 2000, she tells me, and she was attending a full-moon party. “Lexi Moon was there, spinning fire,” she adds. “And I said to her: ‘I want to do that!’ She became my Master.”

But it’s not like it was all that foreign to her training. “I went to a Scottish boarding school in Australia,” she explains. “And I learned to play the kettle drum and the tenor drum there. It’s all about the beat, you know. It’s all rhythm — which is the basis for fire dancing as well. I also have a bit of a gymnastic background, so the moves she was making were quite familiar to me too.”

Whatever it was — kismet, astral connection, destiny, or just another great outlet for all her energy — Phoebe took to fire spinning like an eagle takes to flying. “I did a personality test once,” she says. “And when the results were analyzed, I was labeled an introverted extrovert.” She laughs. “And that really explains my attraction to fire dancing. I would never succeed as a pure dancer, you know. But because I figure the spectators are looking at the fire when I perform — and not at me — it totally frees me up to move and dance like no one is watching.”

And like everything she does, she is fully committed to her art. Another happy burst of laughter. “Some of my students,” she says (she now runs regular fire dancing classes in the valley), “were commenting the other day ‘You’re so smooth’ and saying how amazing it was that I could spin and carry on a conversation at the same time. I told them: “If it looks like I’ve done it a million times, it’s because I have! Now practice!”

The new owner of a townhouse in Pemberton — “I’m so excited, I just closed on it last Tuesday” — Phoebe assures me she’s not planning on moving anywhere else anytime soon. “I just love this place,” she gushes. “It’s paradise. I love the forests. I love the mountains. I love all the secret spots I’ve discovered over the years.” She stops speaking. Smiles for me one last time. “You know — the more I travel, the more I want to stay in this place...”

And I can’t argue with her there.