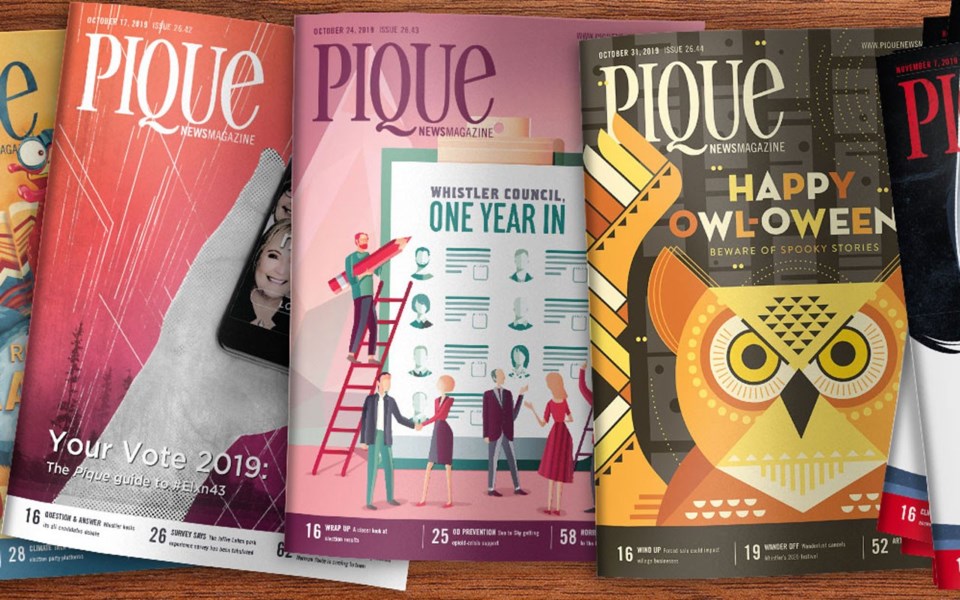 That word, that feeling, that focus is the heart of what Pique has been for the last 25 years.

And though I haven't been here for all of Pique's quarter-century (only 21 years) our commitment to reflecting where we live, the issues that affect us and joy we feel in living here (well, most of the time) has always been part of the pages you read.

When I decided to apply for a part-time job at the Pique after seeing a help-wanted ad, and while working full-time for the Vancouver-based Province Newspaper, I fully expected editor and newsmagazine founder Bob Barnett to shoo me out of his office. After all, I explained, I couldn't put Pique first. The Province had to come first. And I probably couldn't do the stories he wanted me to do. I had to do the stories I wanted to do. And by the way, I just moved here and knew nothing and was planning on covering everything that moved connected to the proposed 2010 Winter Olympic and Paralympic Games.

"Hmm," said Bob in that quiet sort of non-committal way he has that makes you go from "I've got this," to "think again."

But within a few weeks I had a desk to use when not out covering stories, was making new friends at Pique and was learning the real meaning of "working" at a newspaper.

Reporting for Pique is like doing a marathon every week: You start out slow and steady, on pace, but as the finish line gets closer a frantic adrenalin surge begins that pushes you faster and faster over longer and longer hours until the deadline hits for news. Then, as you collapse over the finish line, your last thought Wednesday night is, "I have do it all again."

I didn't apply to Pique because I needed another job, I applied because as soon as I read it I knew that it valued writing, it valued stories, it nurtured wordsmiths in its reporters and its columnists, and the weekly feature was nothing less than a marvel in a time when long-form writing was threatened. It was true to its mantra to "stimulate, arouse and provoke."

I have written many long-form features and am proud to say I have won awards from my peers for them, so to be part of a paper that wasn't tied to a "format," but was free in its expression and the stories it pursues is kind of like winning the journalistic lottery. We collaborated with each other, we edited and copy-edited each other's stories—we tried to make each other better reporters, and Bob was always there with advice and fact-checking (thank God!!). It felt like a "real" newsroom.

Having worked for a big daily for more than two decades before coming to Pique full-time as its editor in 2011, I have truly come to value community newspapers. I understand the foundational role they play in shaping community. We are watchdog and partner, fact-finder and illuminator; we are honest and unafraid to be so.

But we are all also part of the community we report on, and while this can sometimes make covering the news challenging, we hold ourselves to a higher standard than media outlets covering Whistler from afar.

Pique's eclectic nature from must-read news, to in-depth coverage of local politics, to arts, sports and columnists who are not afraid to tackle thorny issues from all points of view make Pique an authentic and challenging read each week.

And commissioning a unique piece of art each week to grace the cover is a commitment from Pique to arts and culture that reaches back to the newsmagazine's very foundation.

Today, the newsroom, production and sales teams are fully committed to bringing you reporting that is contextual and relevant not just for our community, but for how Whistler fits into the world around us from environmental issues, to tourism, to sport, art, culture and food.

Yes, the world of media is changing, but Pique will continue to be at the forefront of the change while remaining committed to strong writing and honest, reliable reporting.

So, raise a glass to us this week, and toast Pique on its next 25 years and counting.