After a few days in Churchill, Manitoba and a two-hour, 20 km/h drive across half-frozen swamp in a "tundra buggy"—the all-terrain monster-truck-meets-bus invented by Leonard Smith in 1979—we arrive at Frontiers North's Tundra Buggy Lodge
Dec 8, 2019 8:00 AM By: Leslie Anthony 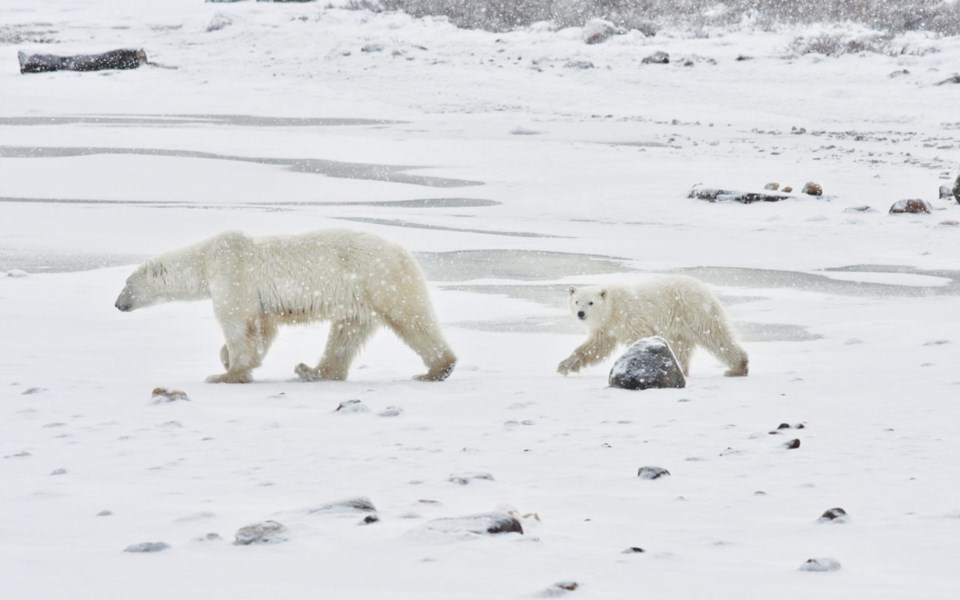 After a few days in Churchill, Manitoba and a two-hour, 20 km/h drive across half-frozen swamp in a "tundra buggy"—the all-terrain monster-truck-meets-bus invented by Leonard Smith in 1979—we arrive at Frontiers North's Tundra Buggy Lodge for the main event of its annual Conservation Journey: three days of polar bear-viewing on the Hudson Bay coast, where the animals gather after a four month fast, awaiting freeze-up and a chance to hunt seals again.

The lodge is a marvel of environment-adapted, DIY engineering comprising enchained high-end bunkhouses, lounge, wood-panelled dining car, kitchen, and staff quarters. Like the vehicles we travel in, a floor-level floating two-metres above the surrounding landscape provides for easy docking—and an interesting sense of being adrift. To maintain ecological and safety separation, staff spend weeks out here never touching the ground. "It's like a space station," one tells me, as stars wheel overhead to punctuate the admission.

We see our first bear the next morning. Loading into the buggy in semi-darkness, a scoop of ice-cream on the tideline 50-metres ahead comes to life. One woman is ecstatic, having dreamed of polar bears all night; others cry. If such emotions around bucket-list megafauna seem feigned, the notion is swept quickly aside by the genuine awe and biophilia we all share.

Sunrises here can be foiled by coastal fog, but today dawns a perfect crimson horizon, washing the snow pink. As light comes up on the drama before us, the bear sits centre-stage, a strand of frozen kelp hung from its mouth.

Our first interpretive lesson: polar bears don't actually forage in the intertidal zone like black and grizzly bears. As guide Duane Collins explains, there aren't enough calories here to warrant turning rocks for tiny crustaceans, and the bears' molars—a shearing array for tearing through seals—aren't configured to extract food value from plants. Thus, speculation over their frequent kelp-chomping ranges from micronutrient scrounging, to maintenance of digestive and mouth health, to something akin to bored bears chewing gum.

Like the geographic quirks responsible for Churchill's polar-bear vortex, the opportunity to view them is also afforded by a unique convergence—the low-lying, treeless coast and network of 1950s-era military trails crisscrossing it. Elevated above the terraqueous patchwork of ponds and shrub willow, the plodding, snow-white tundra buggies become predictable, non-threatening features of the bear's environment without impeding their movements. In fact, the local ecosystem seems both rich and busy—prints of Arctic hare, marten, fox, wolf, and polar bear parallel the buggy tracks, and Ptarmigan lurk in the willows.

We spend hours watching bears wander, dig, and snooze from the buggy's windows or rear deck in what feels like a fugue of astral projection but is very much human conceit—the bears well know we're there, they just don't care. Heading back to the lodge, we spot a massive male crossing the ice of a small lake. Though a metre-and-a-half at the shoulder and close to 500 kilograms, the animal's weight is so well spread on racquet-sized paws that it can traverse thinner ice than a human. It ambles across, crashes through shoreline willows, sniffs the air beside the buggy, then digs itself into a snowbank to sleep at our feet. Long periods spent doing nothing is important, as the animals can lose up to a kilo a day while on land. During the 1980s, average off-ice time was 107 days. But with sea ice disappearing at the rate of 13 per cent a decade, that number is now 130 days. By this point, in early November, Churchill's bears have been ashore 135 days and will likely surpass 150.

We're accompanied by Dr. Steve Amstrup, Chief Scientist for Polar Bears International, who notes how the sea-ice-loss equation adds up to both less feeding opportunity and more-protracted fasts. This one-two punch affects not only reproductive capacity for females that can, in any event, breed only every three years, but individual longevity in the species that once compensated for low reproductive rate, since the sea-ice ecosystem (algae-plankton-fish-seals) delivers 86 per cent of the carbon reaching polar bears. The cost of this crumbling ecological house-of-cards is embodied in the tale of a female bear forced to leave disintegrating ice and swim 687 kilometres over nine days, losing 22 per cent of her body weight and a yearling cub in the process.

Thus, the number of mothers with cubs is declining; those with two cubs rarer still. And yet ... next day we see just that—three bears plodding through a snowfall. Suddenly, another mother with two cubs appears from the other direction, on a collision course. Collins considers this unprecedented. The bears evaluate each other from afar, sniffing the air. Perhaps worried the dim mass she sees looming in the distance is actually a large male, the upwind female turns to run, her cubs scrambling behind. She doesn't go far, however, and soon circles back in curiosity. It's like watching two magnets that ultimately repel; neither trio deigns to get closer, spoiling the fantasies of several in our group vociferously planning Christmas card photos of four cubs frolicking together.

But it doesn't matter, the sight is gift enough. And if conservation turns on the positive energy and deeper understanding delivered by observation, we're all instant acolytes.

For Part 1 on Leslie's trip to Churchill go to piquenewsmagazine.com, Nov.28.