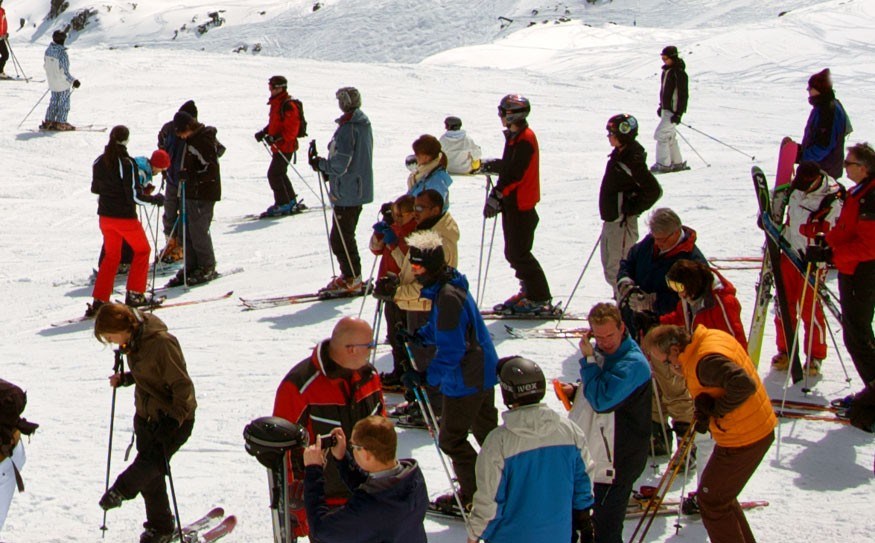 "To affect the quality of the day, that is the highest of the arts."

The world was a vastly different place back in 1986. The U.S. was surfing a new wave of prosperity, the Iron Curtain was slowly being dismantled, big-spending boomers were in the prime of their lives — creating, in turn, their own baby boom... and snowboarders were j-u-u-s-s-t-t-t beginning to make an impact on their local hills.

Hugh Smythe couldn't have timed his move any better. The savvy operator knew exactly what the installation of revolutionary-new high-speed lifts could do for Blackcomb skiers... and ultimately all of Whistler. But he also knew how much this new technology would cost. No matter — Hugh was on a mission. And he wasn't going to be stymied by mere obstacles. When he convinced Vancouver developer Joe Houssian to get involved in the snowsport business, Blackcomb's founder suddenly found himself with all the shekels he needed to propel his west coast baby onto the global ski scene.

It was all about real estate development rights of course (something like 15,000 bed units were eventually allocated to Houssian's company, Intrawest). Still, Smythe's on-mountain upgrade was one of the boldest and most creative moves in the ski-resort business of its day.

And it changed Whistler forever. While some might point to the completion of the village as the most important element in the resort's rise to prominence, I still think Smythe's "wizardry" with Blackcomb Mountain's lift alignments and enhanced uploading capacity created a seismic shift among skiers and riders (let's not forget that Blackcomb was one of the first "majors" to allow boarders on its slopes).

I can still remember zooming up the hill on those new lifts that winter and marvelling at all the fall-line runs they accessed. How much vertical we could ski now. How fast the turnaround was... but also how busy things got on the hill with all these lifts disgorging their up-mountain cargo at such an accelerated pace.

No matter, said my friends. That's progress. You'll get used to it. Now, about that next run...

Fast forward to 2013. Different world, eh? The Russians are über-capitalists now, America is bankrupt, the boomers are playing on creaky joints, and a growing community of self-propelled sports enthusiasts are re-defining what "health and wellness" is all about in the 21st century.

The snowsports world has changed dramatically too. Talk about a revolution in gear! Wide-bodied boards, reverse camber designs, lighter composites, a greater commitment to offpiste innovation by major brands: they all add up to one thing. It's never been easier to adventure off the snowbeaten path than it is today. Forget lessons. Forget paying your dues. With the new gear (boards and skis), you can blunder your way pretty much down anything.

Marry this trend to the booming self-propelled movement and suddenly you have a whole new situation — a gaggle of mountain neophytes looking for fresh tracks.

Which has led to some predictable consequences. Powder days on Whistler/Blackcomb are busier now than Robson Street on a Saturday afternoon. There's no question anymore of "saving" your favourite stash for later. Everything is immediate. Ride it while you can, baby. It'll all be bumps by tomorrow...

But there's a darker side to this situation. People are literally killing themselves for powder. And inbounds at that. I know. I know. We're not supposed to talk about such incidents. But let's be real for a moment. The more Whistler is associated with fresh snow and epic powder days, the more people are going to come here looking for adventure.

And if all the obvious stuff is already tracked out, where do you think they're going to venture? Into more and more dangerous terrain of course. It goes without saying — it's human nature at its most transparent. Follow ze fraish treks...

That's why I'm still scratching my head at WB's new lift-building plans. Really? You want to stuff 50 per cent more people into Harmony Bowl? Dilute the mountain experience until it's so watered down that it has no meaning anymore? Create a rat-race ski domain where stress and crowding dominate? And I haven't even started on the Crystal zone yet... I mean, it's not because you can that you should. As I wrote earlier, 1986 is a long ways in the past.

Now please, don't get me wrong here. This ain't no WB bashing session. As far as on-mountain operations go, I think they're one of the best-managed outfits in the snowsport business. Grooming, snowmaking, mountain safety — nobody in North America does it better. Great staff. Good people. But vision? Not so much...

Consider their recently released capital plan: an $18 million project that will see a six-seater chairlift erected in Harmony while the supernumerary four-seater is transferred to the Crystal zone. It's almost like WB's senior management team is stuck on an unsustainable mantra: "bigger, faster, more people." It's almost like they don't understand that the terrain their lifts access is finite. I mean, it's not like they're opening any new areas to explore (Newsflash: the "new" Crystal zone was colonized long ago).

And people are going to notice the changes right away. Powder turns will be harder and harder to come by. More accidents will occur. Guests will get turned off by the crowds. They'll seek their powder epiphanies elsewhere. And slowly but surely, Whistler will lose its adventure-skiing cachet.

So what are the WB bigwigs thinking? Do they really believe that all this new uphill capacity will impact their bottom line in a positive way? Or is there a more nefarious plan at work here? (Remember Doug Forseth's submission to council during last fall's community plan review where he told attendees that WB expected to be in the mix for new bed units should they eventually become available?)

Frankly I don't care if the new plan is a ploy for more development rights. It's just not the right move right now. At a time when we should be finding ways to encourage people to linger on the slopes (and actually enjoy the environment), WB's intentions seem to be to stuff as many people as possible on the mountain — regardless of the quality of experience. It just doesn't make sense to me.

But it's easy to criticize without offering alternatives. So here's mine:

Imagine skiing down Boundary Bowl to a new alpine restaurant built right at the edge of timberline. Simple construction; practical design — eco-chalet to the max. A huge wooden deck circumnavigates the structure. Incredible views in every direction. Across Singing Pass, the lofty peaks of the Spearhead — Blackcomb, Tremor Trorey. Just over to the right — the Alaska-like lines of Fissile and massive Fitzsimmons spreading its glacial skirt. It's an inspiring place — both cosy and grandiose at the same time. Truly Coast Mountain in style.

The interior of the chalet is almost like a shrine to Whistler history. Posters and pictures and old timey gear adorn the wall. Top maps of the region are hung in strategic places. The tables are large and the seats are comfortable. Everything about the place says: "sit yourself down for a spell and enjoy the ambiance."

And the owner/host of the place is just as colourful a character as you'd want. Makes it worth your while just to drop in and say hi from time-to-time. He and his family live full time in the chalet (they have a licensing agreement with WB) — and his stories of high-mountain jinx are hilarious. As for the food he and his wife prepare onsite, it's simple fare, but hearty and authentic — great chunky stews and soups, fresh baked breads and pastries. "Mountain soul food," he says proudly.

You can't help it. You and your friends linger over coffee. There's no hurry to get back to the lifts. This is just too beautiful a place. You're going to come back soon, you decide. And everyone agrees.

Cool eh? Now imagine two or three of these owner-operated chalets spread out over WB's vast alpine domain. Think of the experience. The memories. The compulsion to return. So yes, there are other ways of investing that $18 million, Toto. You just have to let your imagination soar a little...