Over the weekend, word came that American Media was shuttering four hallowed action-sport titles: Bike, Powder, Snowboarder and Surfer. It’s a gut-wrenching turn of events for many in the Whistler community.
Oct 11, 2020 8:00 AM By: Leslie Anthony 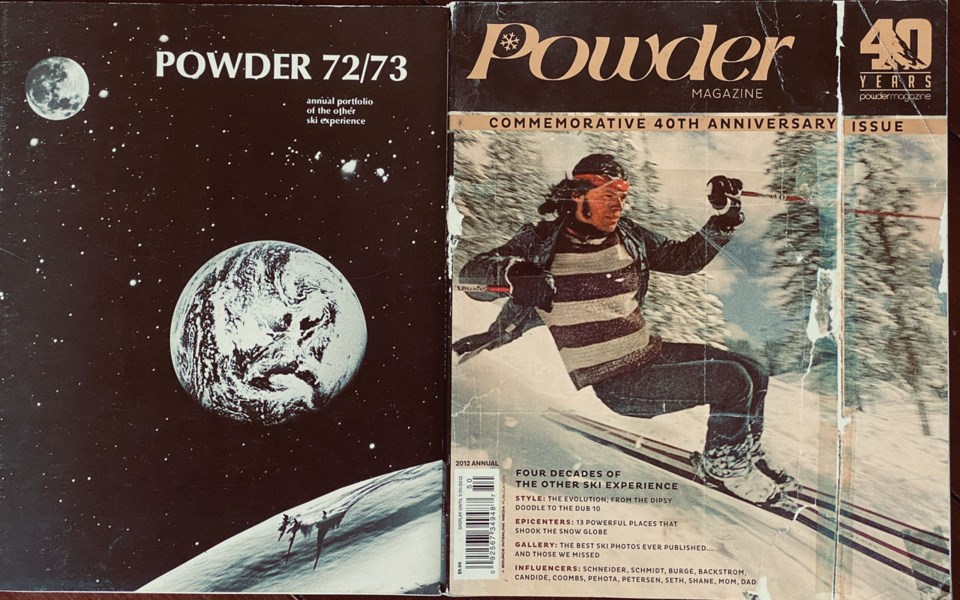 GOODBYE, POWDER Leslie Anthony looks back on his time with the iconic ski magazine, which was recently shuttered. Photo by Leslie Anthony

Over the weekend, word came that American Media was shuttering four hallowed action-sport titles: Bike, Powder, Snowboarder and Surfer. It’s a gut-wrenching turn of events for many in the Whistler community. I’ll have more to say in the future, but for now, offer an essay penned for Powder’s 40th anniversary in 2012.

I should have been Editor of Powder. As Managing Editor, I was next in line to the crown, a king on-deck. And, as befits any royal-in-waiting, legions of tea-sipping old-lady skiers awaited my coronation. Old, I assume, because according to one letter-to-the-editor of that era, my opinions were those of a “90-year-old wanker.” Such reader antipathy alone diminished my chances of clutching a scimitar in the court of reprobates inhabiting Powder’s then-office in San Juan Capistrano, Calif., but in the end, family matters would scuttle my bid for glory when I was forced to retreat from the Golden State to the lesser kingdoms of the Great White North. In the meantime, however, I could claim to have known many of those who would ultimately hold the throne.

My first feature for Powder was commissioned by Casey Sheahan, who—perhaps because writers who actually lived and skied in the East were rarer than hen’s teeth—listed me as a valued contributor when he passed the helm to Steve Casimiro.

In turn, Casimiro deemed my collaborations with photographer Henry Georgi of such value—apparently because we “worked cheap and would do anything”—that he asked, in a terse fax, simply: Where do you want to go this winter? My answer was the definitive three-word list: Quebec, Newfoundland, Scotland. And off we went, no rationalization necessary. The next year, on assignment to Alaska for the “Soul of Skiing” theme issue, Casimiro routed Henry and I through Los Angeles from Toronto so we could tour the Powder palace.

It added a million miles to the journey but we ate our first tacos, met everyone that mattered, and stayed at Casimiro’s hobbit house in Laguna Beach that featured a fur-wrapped television and toys mail-ordered from an Archie McPhee catalogue. It confirmed the Canuck view that everyone in California was weird but didn’t stop me—after ski trips with Casimiro, Rob Story, Dave Reddick and other Powder stalwarts—from eventually moving there to work.

My first day on the job was rattled by an earthquake no one paid attention to. Next day, my dog died and I had to line up at a crematorium behind Hollywood types turning their poodles to ash. The day after, it rained, and everyone in the office—everyone—walked to the front door to observe this apparent meteorological miracle. I felt I’d entered Narnia.

Although I learned much from Mr. Casimiro about making magazines, we also had many adventures. Though he didn’t drink, he was no stranger to childish mayhem: together in the Nevada desert we sprayed string cheese around a gas station, vomited Pop Tarts, and giggled like children in the Clown Motel; we swung upside down from John Falkiner’s rafters in Verbier after skiing miraculous waist-deep April pow with Ace Kvale and Mark Shapiro; with Mike Hattrup we were chased through Chamonix by Gendarmes for raining snowballs from a hotel balcony; we ran aground in the Arctic Ocean off Greenland aboard a boat dubbed the “S.S. Coffin”; and dissected the cheese-and-chocolatiness of the World Alpine Championships in Vail. But our strangest bond was that somehow, independently, we’d both climbed and skied ash-dribbled volcanoes in Mexico, inspired by the same 1980s story in Powder.

As chief editorial underling I had my own stable of go-to contributors that included Tom Bie, John Bresee, Derek Taylor and Porter Fox. All save Porter—too much of a free spirit to be anything but Editor-at-Large, a role I would also be relegated to—were sufficiently persistent and savvy to go on to be Editor. Speaking of free spirits, one day I was told I was getting an intern. It turned out to be a freckled, mop-haired guy from Gunnison, Colo., whose first words to me were: “Holy shit—you’re a dude! When I told people I was going to work for Leslie Anthony they said ‘I’ll bet she’s hot.’” He lived in a shit-show VW van in the parking lot, poking his head out from its shell each morning. We called him Turtle, but his name was Keith Carlsen. He was the messiest person ever but good at cleaning my office. Somehow, he also became Editor.

One time, while Keith was minding my house and I was on assignment in Fernie, I picked up a baby-faced, dreadlocked snowboarder hitchhiking to the hill. He knew my work and blurted that he, too, really wanted to get into writing. My advice was: don’t do it, but if you must, blah, blah, blah… years later he called out of the blue to thank me for whatever I said. Steve Metcalf then shaved his dreads, turned to skiing, and also became Editor of Powder.

Apparently, the crown was easier to claim than I thought. Maybe being a 90-year-old wanker wasn’t a handicap. Maybe I didn’t need to get Casimiro into all that trouble hoping he’d be killed so I could slide into his chair. Maybe I could even have run the ship from a remote hideaway in the north. But we’ll never know, will we?

OPINION: Most unique election is also most expensive
Oct 24, 2020 11:43 AM
Comments
We welcome your feedback and encourage you to share your thoughts. We ask that you be respectful of others and their points of view, refrain from personal attacks and stay on topic. To learn about our commenting policies and how we moderate, please read our Community Guidelines.