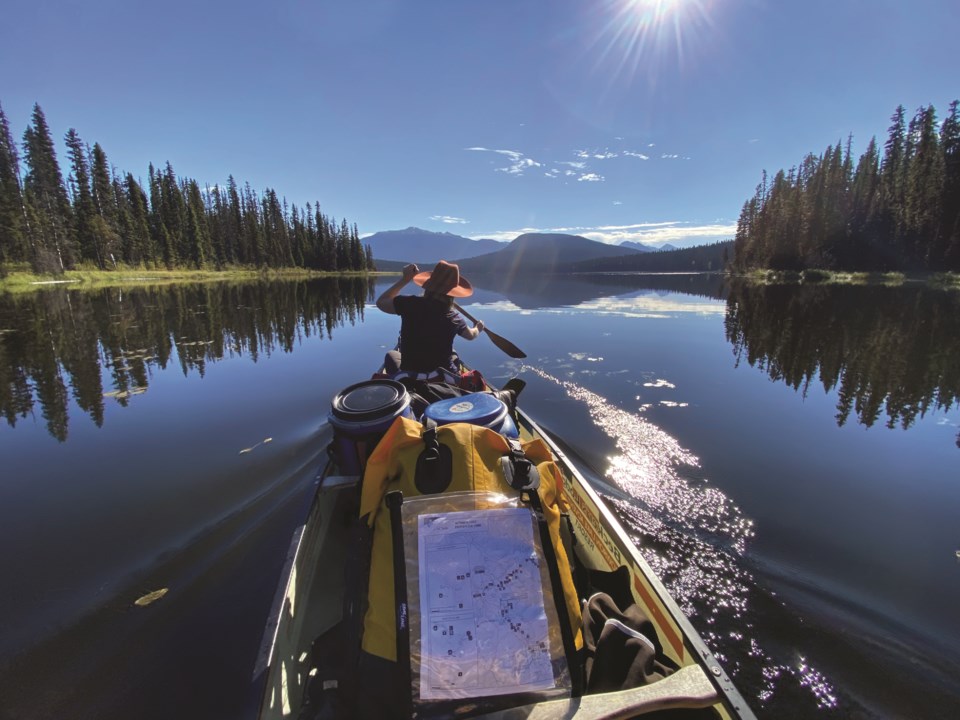 The first three portages in B.C.’s Bowron Lakes canoe circuit come quickly. Totalling six kilometres, it’s a heavy first day if you play it through. But then, utilizing canoe-wheels and carting 27 kilograms of gear inside the boat means two pack-laden canoeists need only make a single trip across, rendering these lake-links pleasant strolls compared to a two-kilometre, double-carry in Ontario canoe country. Indeed, one-pass rolling portages are tantamount to enlightenment for anyone who came of paddling age wilting under the sweaty, bug-ridden, canoe-humping Voyageur version. Ditto these trails, for which the word “buff” wouldn’t be a stretch; the rocks, roots and muck of even the angriest forest floor here are mere polite intrusions compared to the Tough Mudder gamut dished up by the likes of Algonquin and Quetico parks.

But here’s the real upsell: beyond Cadillac portaging, canoeing the Bowron offers something that Ontario, for all its terraqueous splendour, cannot: mountainous horizons, converging contours marching into the distance, gaps where glaciers have sagged through passes to carve out valleys, canyons riven by water dancing down ridges. It’s this sweep of landscape I contemplate in the bell-clarity of a warm late-September day, with two portages behind and a notion to leave the third for tomorrow. After all, with Indianpoint Lake mirror-like under a cloudless, late-afternoon sky, it seems like time to stop and enjoy the 30˚C heat.

A spacious campsite looms on the left and our two canoes nose in. Tents are thrown up, hammocks hung, bathing suits donned. After a quick dip, it’s warm enough to air dry. Sometime later there’s fire, a curry dinner, and a few pulls of scotch before bedding beneath a star-spackled firmament. So far so good with seven days to go.

Bowron Lake Provincial Park hugs the western slopes of the Cariboo Mountains. Its world-renowned wilderness canoe route is a 116-km chain of waterways that typically takes six to 10 days to complete, depending on skill level and timeframe. The west side of the circuit is framed by the uniquely rounded hilltops of the Quesnel Highlands, whose character differs markedly from the imposing Cariboo Mountains on the eastern and southern aspects. Like all B.C. Parks, increased visitation has put pressure on resources here, most of which are usurped by administration at the expense of needed campsite upgrades and expansions. COVID-19 didn’t help, as more people than ever were now plying these waters, doubtless, like us, because they’d had to cancel other plans earlier in the summer. The Bowron has a reputation for moodiness, with gentle lakes under blue skies quickly turning to angry gray waters and torrential rain. We were prepared for anything—including being pleasantly surprised.

The next day dawns sunnier, hotter, and preternaturally still. The portage into Isaac Lake is challenging, with sections of fondue-like mud stirred by a miserable summer of non-stop rain (at the required weigh-in and orientation before launch, park rangers said we were already enjoying the best two-day spell all year). Isaac is a behemoth—38 km long and known for kicking up in bad weather. But for us, it’s a placid pond and we spend two more blissful days working our way down its glassy southern shore, luxuriating in the heat and camping atop pebble beaches.

The day we leave Isaac is our longest yet, beginning with a two-hour paddle to an exit portage that skirts a rapid. A short hop across McCreary Lake and the silty loops of the Cariboo River carry us onto Lanezi Lake amidst the park’s highest peaks. Renowned for near-constant wind, Lanezi greets us with naught but a ripple, and we make our way to a campsite with a stunning overlook into the heart of the mountains. It’s here that smoke from American wildfires catches us, mixing with the cool night air of autumn to create a veiled dreamscape hung with a red bladder of light.

The smoke-cum-fog follows us the next two days, up Lanezi into Sandy Lake, then on a slight detour off the main route into Unna Lake, where we set up camp before making the 1.5-kilometre hike to Cariboo Falls through a pine-beetle burn carpeted in blueberries. We graze sapphire orbs like hungry grizzlies en route to the powerful falls, but when we return to the canoes, we fear our good fortune with weather has run out; with cloud lurking on the horizon, we stop in at the campsite for rain gear before exploring a nearby lake. It proves surreptitious as a Whistler couple who we’d made loose plans to travel with but who’d been forced to start two days late pick this exact moment to stop for lunch, parking their canoe at our camp. The joyful reunion yields a party of six for our final few days, which also deliver otters, beavers, herons, cranes, eagles divebombing loons, and a moose wandering through camp. And it never does rain. In fact, the sun returns with a vengeance.

Our final day dawns misty, the kind that sits on the water. But with the smoke gone, the weak September sun finds a way to burn through it and our final 15 km are a doppelganger of Day 1: bluebird, hot and glassy. Hitting the final beach at the end of Bowron Lake, the only thing we can think is that it wasn’t just a great canoe trip, it was literally perfect.

Leslie Anthony is a Whistler-based author, editor, biologist and bon vivant who has never met a mountain (or a lake) he didn’t like.