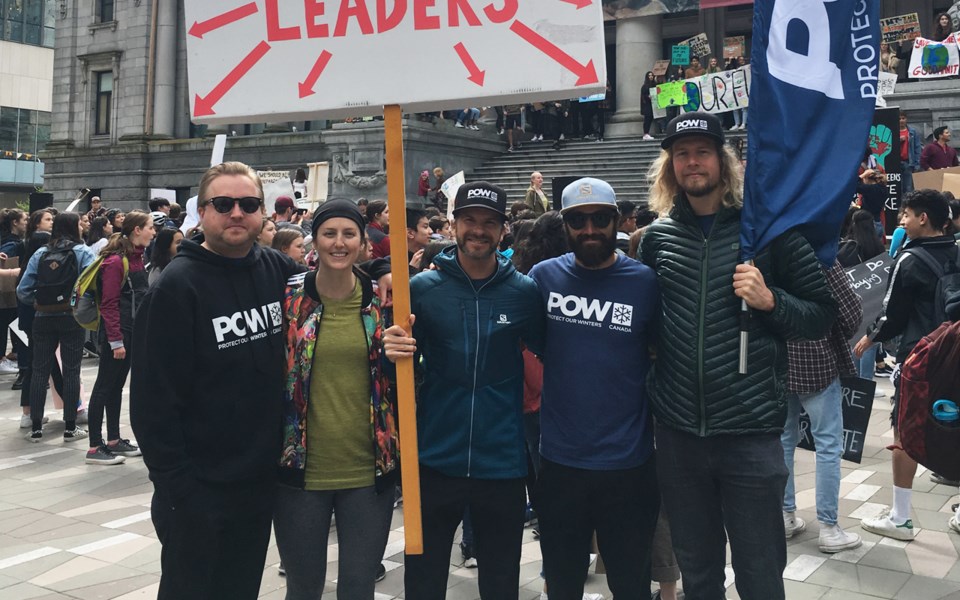 Mike Douglas (centre) and the Protect Our Winters crew at the Fridays for Future climate march in Vancouver in 2019. File photo by Clare Ogilvie

Whether or not British Columbia needs the election scheduled for this Saturday is a moot point. Ours is not to question why, ours is but to vote. And the numero uno consideration for choosing a candidate or party should be their stance on climate action. Why? First, because we haven’t just been hearing about climate change for decades now, but actually experiencing and coping with it (hello, wildfires; goodbye, Horstman T-bar!). And second, everything else—from the current pandemic to tourism to the viability of small business to educational opportunities and positioning for the future are intricately tied to our action on climate in the next few years.

I won’t draw out those connections for you, but they’re obvious enough that when you go to the polls you should keep in mind that “Business as Usual” is what got us into the current climate emergency, biodiversity crisis and pandemic messes, and BAU going forward is simply not an option. For example: to even make a dent in emissions, fossil fuel subsidies must end, renewables must not just be courted but embraced, and B.C.’s tiny remaining stands of old-growth forest must be left in place.

“I’m a non-partisan person who votes for what makes the most sense,” says Mike Douglas, chair of Protect Our Winters Canada. “The world is a rapidly changing place and the science is clear that we have to act in the next decade to avoid the worst effects of climate change. With the environment intimately tied to the economy, to keep business moving in this town we need the most progressive representation possible. After doing a ton of research, I’d say that’s the local Green candidate.”

I won’t be quite as blunt, but red (which is really blue in this province) is still very much an alarm colour to me, and orange isn’t quite as good as it looks. In fact, my choice is as clear as the colour of Whistler’s mountainsides—uh, between wildfire smoke events.

In case you’re undecided, I’ve gathered data from B.C. government climate websites as a reminder of where we’re at and where things are going.

What’s Happened: data from 1900 to 2013 indicates B.C.’s average annual temperature has warmed by 1.4 °C, the average overnight minimum in winter by 3.1 °C; precipitation is up across the province; sea level has risen along most of the coast; lakes and rivers are now ice-free earlier in the spring; and the Fraser River’s lifeblood water is warmer than ever.

The Coast will see continued ocean warming and acidification, with range changes for marine animals and the influx of invasive species and disease. Low salmon returns responsible for emaciated grizzlies and killer whales will be exacerbated by “the blob,” a huge patch of warmer-than-normal water in the North Pacific (the blob first appeared in 2013, lasted through 2015, and after a two-year hiatus made a return in October 2018), as well as low-water in ancestral spawning streams due to drought.

Vancouver and the Lower Mainland will suffer increasingly variable weather that includes: increasing frequency of storms, increasing strength of storms with accompanying damage and risk to life and infrastructure, and increasing summer drought, wildfires and water shortages. With increasing temperatures will also come soaring air-conditioning costs, worsening smog and associated health problems, summer droughts followed by severe autumn rain events, and invasive species threatening forests and agriculture. Glacier melt will continue in all ranges, revealing unstable slopes. Higher winter rainfall and spring temperatures will increase the risk of natural disasters like debris flows and large-scale landslides. (The Mt. Meager landslide in 2010 was the largest in Canadian history, and similar climate-driven slope destabilization triggered the collapse of Joffre Peak in 2019 that came within a few hundred metres of Highway 99.)

In the Okanagan and other agricultural areas, insect phenology (the time of appearance) is affecting crops: e.g., cherry growers might spray their annual insect control at a certain time, but if fruit flies emerge two weeks earlier because of a warming climate, the crop will be hammered. This also affects insectivorous birds that time their migrations through areas to coincide with insect emergence.

The Cariboo-Chilcotin is seeing increasing temperatures and drought, the result of which was the record-breaking, treasury-draining wildfires of 2017 and 2018.

Northern B.C. is experiencing the province’s highest rate of warming; this isn’t the good thing it seems as it’s bringing increased precipitation (Terrace just had its most miserable summer in memory). The change to average freezing levels in the north since the 1980s is apparent in the historic loss of low-altitude ski areas in Terrace (Kitsumkalum), Kitimat (Hospital Hill), and Prince Rupert (Mt. Hay).

If all this has you seeing red and wondering why orange tastes a bit sour, maybe it’s time to vote Green.