RANGE ROVER: What lies beneath 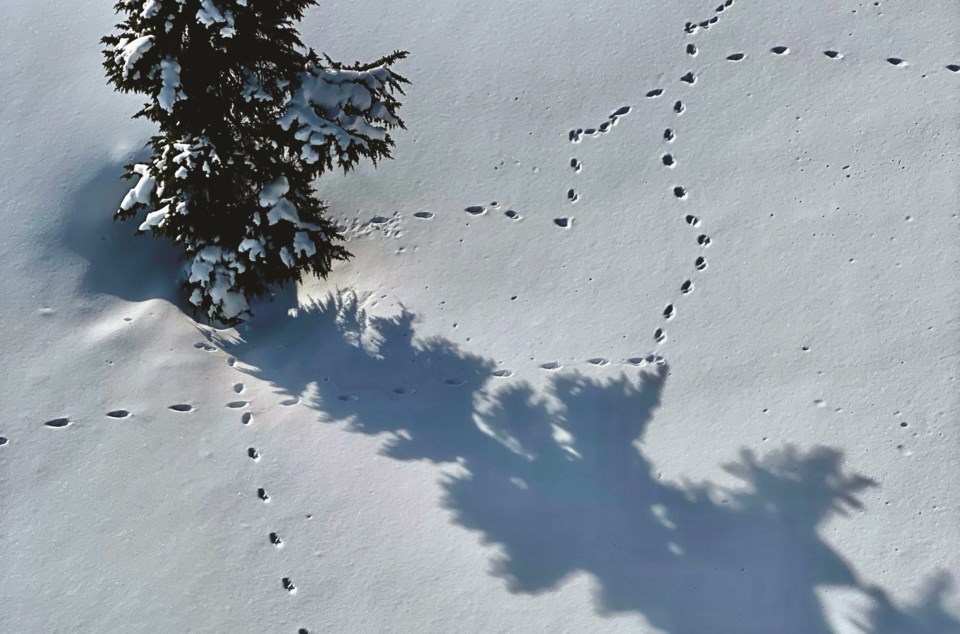 Early in March, on a sunny morning after a glorious snowfall, my partner and I were riding up Garbanzo chairlift when we noticed a set of animal tracks cascading down through the new snow beneath us. Unlike the tracks often seen in the meadow at the top of the lift, which tend to be from several different creatures crisscrossing the lift line from one forested patch to another, these tracks had a more deliberate feel. From the bottom of the liftline run to almost the top—a considerable distance, I might add—the footfalls went directly from one specific spot to another and stopped, showing evidence of investigation or, in some cases, digging. This pattern immediately got my attention. The tracks clearly belonged to an animal on the hunt for another, and sure enough, at two different places where the former had stopped to dig, the snow was stained with the blood of the latter. Fascinating.

The tracks were too large and widely spaced to belong to a long-tailed weasel, the perky predator whose summer brown coat shifts to winter white, perfect camouflage for prowling the subnivean (under-snow) world for the voles, mice and shrews that remain active throughout the season. But they were also too small to be a coyote. Fox maybe? Pine marten?

Whichever animal made the imprints, however, mattered less than what these showed. Each spot the animal more-or-less beelined to and checked out was a mound of snow—a skier-made mogul. And always a mogul, never the compressed troughs between. I can’t attest to whether these mounds harboured clumps of vegetation or stumps or rockpiles, but they definitely contained critters. And since the hunter clearly knew something about what was going on beneath certain moguls, I had to wonder: was this subsidized predation—the term employed when an anthropogenic action or construct directly or indirectly makes it easier for an animal to find its prey? In other words, was there a correlation between our mogul-making on this run and a congregation of prey beneath them?

If so, it was both interesting and news to me. But not surprising. Ski areas have all sorts of known effects on the ecosystems they spring up in—and probably double that in unknown effects. Only a few weeks prior to that chairlift ride, I’d wondered aloud to my partner about snow-compression in the trees and what kind of effect it might have on understory plants, birds and other creatures. This occurred to me because traffic in non-gladed forest areas on Whistler Blackcomb has increased 100-fold or more in the two decades I’ve lived here; whereas skiing the trees once felt like you were a careful interloper in the realm of the forest gods, it now feels like you’re skiing a packed run that just happens to be studded with trees. I wondered if anyone had thought to look into this and, of course, they had.

The wily Swiss, who have many hard-closure areas on their ski hills for alpine ungulates like chamois and ibex that use these forests in the winter (a situation we do not have in Whistler) conducted a study of stress generated by “free-riders” (their pejorative use of the term is comical) on wildlife. The premise was that human disturbance probably adds to other negative impact factors affecting vulnerable populations. Evaluating the physiological stress response of radio-monitored black grouse, they concluded that being actively flushed from their snow burrows by off-piste skiers was indeed stressful to the birds. As far as compaction of snow within regularly skied forest areas, we can take out cues from the several studies of on-piste snow compaction.

A large review of the ecological implications of artificial snow and piste-preparation in general found the expected direct impacts related to the compaction of snow cover, namely the induction of soil frost, formation of ice layers, mechanical damage and a delay in plant development. Vegetation also reacts with changes in species composition and a decrease in biodiversity. The use of artificial snow modifies some of these impacts: soil frost is mitigated due to increased insulation of the snowpack and mechanical impacts of snow-grooming are mitigated due to deeper snow cover. But there is no getting around the delay of vegetation development being enhanced by a considerably postponed snowmelt—solely due to snow compression. In a study in the Australian Alps, the range of indirect impacts on plants from snow compaction was extensive, and included lower soil temperatures, greater depth of soil freezing, depleted soil nutrients and higher pH. This in turn induced changes in soil biota, herbivory, animal activity, predation, insect activity, seed dispersal and the composition of plant communities. Mostly, however, it highlighted that no one is really studying these things. We have no clue how this affects the small critters of the subnivean world and their outsize role in ecosystem health; their success in any given year is at least partially responsible for regulating populations of everything from owls to weasels to larger predators.

There might even be a role in climate change. Since up to half the carbon that plants take up in summer is released back into the atmosphere by microbes in winter under normal circumstances, does snow compaction increase or decrease this?

There’s no real point to this column other than the usual ponderings of humans not knowing much about either our surroundings or what we’re doing to them. The reality of not knowing what goes on beneath our snowy landscapes might be a little like not seeing the forest for the trees.