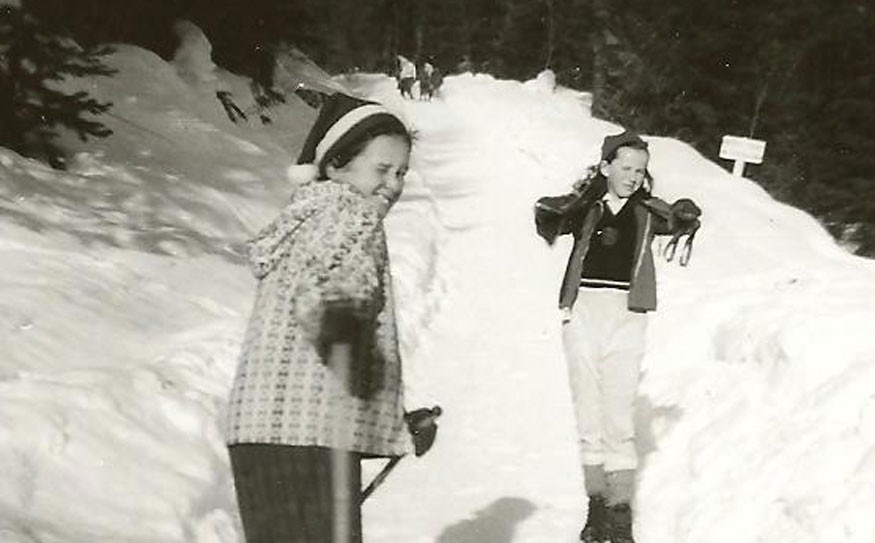 "Home is people. Not a place. If you go back there after the people are gone, then all you can see is what is not there any more."

She grew up In Vancouver's West End – in a classic fin-de-siècle Victorian rooming house run by her parents. English Bay was a stone's throw away. The beach was virtually in her backyard and she played there almost every day. As for the rambling old house, it was mostly filled with ex-pats referred by the Austrian consulate. The place, she says, happily exuded the gemutlichkeit of her father's birth-country.

In other words, life was pretty darn good for the young fourteen-year old when her dad announced they were picking up stakes and moving to the family's mountain cabin. Say what?

The year was 1966. A new ski hill was about to open just across the lake from the weekend getaway her dad had bought a few years before. It was called Whistler Mountain; her dad was actually helping to design and cut the runs there. People said the monster ski hill with the flashy silver gondolas was going to be a game changer. She didn't know anything about that. All she knew was that her own life was about to change... in a big way.

Indeed. Imagine leaving downtown Vancouver (as provincial as it still was in those days) for the wilds of Alta Lake. Highway 99 had just been built and was barely passable... on a good day. There were few amenities in the valley yet: grocery shopping, banking, medical or dental issues — even attending school — meant a long and harrowing road trip down to Squamish. It was as close to edge-of-the-world living as you could get.

And for a young teenager in the mid 1960s, moving to Alta Lake must have felt a bit like being sent into exile. No?

Renate Bareham doesn't answer right away. Instead she smiles. "Just like my dad, I was in love with skiing," she says. "So I was really excited to move up full time. Now, I'd be able to ski every weekend. And that was just fine by me."

Nobody talks about Stefan Ples much anymore. Like so many of Whistler's early pioneers, his story has slowly begun to fade from view. But back in the old days — back before Whistler went, dare I say, mainstream — Stefan Ples embodied the heart and soul of this new mountain community.

You see, long before the Garibaldi Olympic Development Committee was formed, long before Franz Wilhelmsen alighted on the peak of London Mountain in a rented helicopter, Stefan Ples had already hiked and skied all over these peaks.

And unlike so many who came here after him, Stefan had zero desire to profit financially from his long-standing relationship to this beautiful valley. His contributions — from founding the Tyrol Club and building the Lodge in 1959 to helping launch Whistler's first Search and Rescue Team in 1973 — were always about making the community a better place for everyone. Not just for him.

In essence, he was the yin to Franz Wilhelmsen's yang. And I think ol' Franz always knew that. For though the two men were never as close as legend suggests, Ples' more conservative mountain vision always tempered his colorful counterpart's expansionist views.

Ironic too. For in today's re-worked Whistler story, many of Ples' early accomplishments have somehow migrated to the Wilhelmsen side of the ledger. Take all that meteorological data so painfully (and meticulously) amassed from the top of London Mountain in the years prior to its development. While some would have you believe that it was collected and collated by Whistler Mountain's future president personally, a quick visit to the local library will reveal that the original weather records are all in Ples' distinctive handwriting.

Hmm. But I digress. Back to our story.

"Like many of his generation," starts Renate, "my dad was quite strict. Old school, you know. But he was a very nice dad. He always had time to tell me stories — just not war stories." She pauses. Searches for the right words. "I came late in my parents' life — they were both in their 40's when I was born — so there was always a bit of distance between us. And because my only brother was ten years older than me, well, I grew up kind of like an only child..."

As for her earliest memories of the Alta Lake cabin, Renate admits it was a very long time ago. "I don't remember as much as I should," she apologizes. But her memory seems fine to me. "Our cabin," she explains, "was just off the Westside Road, on the lot right next to Cypress Lodge (the site of today's Youth Hostel???). There was no road access of course. And I remember coming up on the train and having to walk to our cabin all the way from Alta Lake Station." She laughs. "And having to carry everything ourselves — our food, our clothing, everything! I was the littlest one of course, and it always seemed a long walk to me..."

Her first visit to Alt Lake was in summertime. She fell for the place immediately. Even though, she admits, there wasn't much there yet. There was a little store at Rainbow Lodge," she tells me. Smiles. "And if you were lucky, they might even have what you needed. But mostly everyone looked out for everyone else."

Her dad would often go up alone (especially in winter), while Renate and her mom would join him during the summer months. Still, the "off-season" offered magical Alta Lake moments as well. "We'd go up on special occasions," says Renate. "You know Thanksgiving, Christmas, maybe Easter." She sighs. "I remember skating on the lake one Christmas morning in my new red skating outfit." More laughter. She shrugs. Laughs some more. "I was so proud of that outfit..."

It was around 1962, she says —"but it could have been earlier" — when Dick Fairhurst decided to install a rope-tow on the gnarly hillside above Cypress Lodge. Although she already knew how to ski — "my dad taught me when I was three years old," she says — Renate admits that the new rope tow still posed some difficulties for her. "It was a very challenging hill. Quite steep — and I was still quite small. In fact, I remember falling one time while going up the tow." She laughs again "I was lying in the snow and I couldn't get free of the rope — the tow was still going and the rope was running over my leg, pinning me down. It probably looked quite funny..."

The transition from weekend getaway to full-time home in '66 went relatively well, remembers Renate. "My dad was working for the lift company at the time and he got me a weekend job there too." She smiles proudly. "I was the one responsible for handing out the gondola boarding passes."

But what about other kids? "I think there were five of us who were teenagers in 1966," she answers. "The Gow sisters, Karen and Connie, a First Nations kid by the name of Dale Thavarge, and Dave Walker, the bus-driver's eldest son." She stops. "Come to think of it, the bus driver didn't bring his kids up until the second year we were there. So I guess we were only four teenagers at first."

Any regrets? "Because we had to take the bus home immediately after class," she confides, "I never got to experience the extra-curricular side of high school. You know, playing team sports or joining the chess club... or any of that stuff. It's pretty much the only thing about those years I regret now."

She graduated in 1970... and promptly moved to Vancouver. "I wanted to be a city girl again," she admits. "I wanted to be a legal secretary." Which she soon became. Meanwhile she kept her mountain connection alive by teaching skiing mid-week for Ornulf Johnson at Grouse Mountain... and visiting Whistler on weekends.

The years passed. Renate got married and had a child. Then tragedy hit. Her father and her husband passed away within three weeks of each other. "At that point, I started dreaming of moving back to Whistler with my daughter." She sighs. "But it was 1985 by then. And prices at Whistler were going up so fast that no matter how much I saved I could never catch up." So she stopped dreaming of moving back to Whistler and got on with her life.

Today, Renate is remarried and lives in Pemberton. How she got there is a whole other story. "We live on five acres in the forest," she tells me. And smiles "It's almost like living on the Westside Road in the old days." And Whistler? "I feel sad every time I visit," she admits. "It's so far from what I remember. So far from what my father dreamt about. I don't think Stefan would be impressed by how urban Whistler has let itself become over the years..."