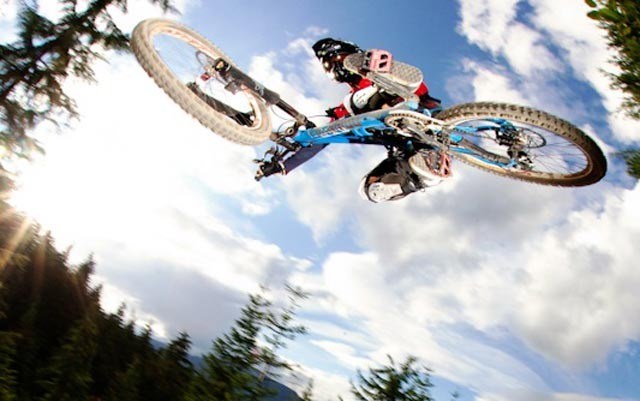 "It takes knowledge to know others, but it needs a clear mind to know oneself."

(Michel is away so Pique is running some of his columns from years past. This one was first published January 2011)

I remember the first time I met him. He was sitting in our little mountainside hideaway trying his hardest to look like he belonged. Small-boned and short of stature, cheery-faced and teenybopper handsome, the kid seemed entirely harmless. But he wasn't getting any love from me. At least not yet. "Another effin' wannabe," I thought to myself callously. "Another Whistler newcomer with a blond ponytail, a Trevor Petersen fixation and the requisite Sierra Design parka. He'll be gone by next season..."

That was almost 20 years ago. Today Richie Schley is one of Whistler's most recognizable sports stars. And at 41, one of the community's most enduring. Indeed, in many ways, Schley is the embodiment of Whistler style. Say what? Let me explain...

The number of athletes in this valley who've made a name for themselves over the years is almost too large to count. From Dag Aabye to Dave Murray, Britt Janyk to Maëlle Ricker, some of the planet's best skiers and snowboarders (and bikers and runners and climbers and skaters) have made their home here. Very few of them, however, have been able to make a living from two sports. And even fewer are considered pioneers for what they accomplished along the way.

Enter Schley. With his easygoing demeanour and super-relaxed riding style, Richie has always sparked a little envy among his peers. Why not? The guy makes things look easy. So easy, in fact, that most people underestimate just how hard Schley has worked on his craft over the years.

But the pros know. Which is why photographers and filmmakers enjoy working with him so much. Whether he's dropping a 20-footer on skis, or greasing an impossibly-steep drop on his mountain bike, Schley never seems to have a hair out of place. He hits his mark, he smiles on cue, and he mostly sticks his landings. His clothes are clean, his colour sense is bang-on and he rarely whinges at delays. Did I also mention the camera loves him? I mean, really loves him. Consider the number of magazine covers he's garnered over the years. The number of articles he's appeared in worldwide.

Still, all that pales next to the contributions he's made to the development of freeride mountain biking. Meaning? While Whistler's Mike Douglas may have skiing's 'father of new school' title sewn up, Schley is certainly his two-wheeled rider equivalent.

Remember Kranked? The 'Fro Rider' movement? Remember that gang of outlaw bikers led by Schley, Brent Tippie and Wade Simmons who took the global cycle market by storm in the mid-90s and introduced B.C.-style biking to the rest of the world? The cycling industry sure does. Recently inducted into the International Mountain Biking Hall Of Fame, the three Canucks are widely recognized as the progenitors of this now-wildly popular category of riding. For most consumers, Schley is the movement's figurehead.

"It's kinda funny that way," says Schley with that little-kid grin he still sports. "No matter how big I get elsewhere, people still don't take me all that seriously here. Of course you're never a star at home." He pauses. Takes a breath. Ponders on how he's going to get his point across without insulting anyone. "But it seems to me that the people who make decisions at Whistler have very short memories. I could do a whole lot more for this place. Unfortunately, the business climate here is pretty stifling..."

As usual I'm getting ahead of myself. Let me backtrack a little.

The only reason the two of us are talking, I figure, is because we're both injured. For me, it's just more of the same. But for Schley this enforced time-out is something of a novelty. "I never get hurt," he says, with just a trace of surprise in his voice. "I mean, I pretty much made a career out of it. Don't know if it's because of my body type or attitude, or maybe just plain ol' good luck, but I've been able to generally stay off the injured list." He sighs. "This was a real weird one."

No kidding. "It was a pretty nasty week," he admits of a fatal New Year's cat-skiing trip with friends in the interior of B.C. "First my buddy loses his wife in a tree well..." Another long pause. Schley shakes his head. It's obvious he still hasn't quite processed that one. "I was there for the whole retrieval process," he finally blurts. "It was hell - but very enlightening."

And his accident? Happened a few days later, he explains. "I was on a pair of new skis and bindings. They'd pre-released once before the trip, so I'd gone to a repair shop and had them crank up the bindings." He thought he'd solved the problem. The skis were staying on. Then he fell - something that doesn't happen all that often in Schley's world.

"It was a full forward fall," he goes on. "I went head first. My first thought was 'don't let me drop into a tree well.' My second thought was 'hey - my heelpieces aren't releasing.' I was desperately trying to twist out of my toe piece when I felt the pop. I think my skis released at the same time as my Achilles tendon ripped..."

The result: surgery in Vancouver, a season of skiing totally down the tubes - and a host of spring mountain bike events in jeopardy. "I'm hoping to be fit and back on the bike for my first event," he says with a rueful grin. "Meanwhile, I think I'll head down to California to recuperate." Another ear-to-ear grin. "After all," he says, "better to rehab in the land of sunshine than here."

Ah, the life of the rock star. But it wasn't always that easy for Schley.

Like many kids growing up in the Interior of B.C. in the '70s and '80s, Richie dabbled in a variety of outdoor sports. An accomplished BMX rider in his teens, Schley became a regular skier at Sun Peaks (then called Tod Mountain) when his family moved to Kamloops. "I think I spent half of my final year at high school skiing," he says. And chuckles. "It was great fun, you know, but Sun Peaks is pretty limited..."

Meanwhile he'd fallen head-over-heels in love with Greg Stump's crazy, creative, wild-eyed ski movies. "I remember watching Blizzard of Aaahs and thinking to myself 'I want some of that...'" He laughs. "I didn't know how. And I didn't know where. But I knew in my heart that this is what I wanted to do."

It was around this time - 1989 remembers Schley - when a buddy announced he was moving to Whistler. "I had just graduated from high school," says Schley. "I had friends flailing at university. Others struggling to make a mark for themselves in Kamloops. But I loved skiing way too much to go down that path. Whistler sounded like the ideal destination for me."

It was a move he never regretted. "I fell in love with the place the moment I arrived," he admits. "I don't know why, really, I just knew I'd found my place."

Whistler in the early '90s, says Schley, was like nothing he'd ever experienced. "It was like a world convention of young-thinking people. Didn't matter where you were - on the hill, in the backcountry, in the bars even - you were totally surrounded by people with a true passion for sliding on snow."

As for the skiing, it was like nothing he'd ever encountered. "There was one cliff at Sun Peaks," he says, "and we jumped it so many times it was crazy. But here..."

And he recounts a short anecdote to illustrate his point. "I remember standing above this pretty big leap - you know, 30 feet or so - in my one-piece Sun Ice suit and wondering whether I should attempt it. Suddenly out of nowhere comes Larry Charon, skiing down through the trees at mach speed. All I hear as he goes by is 'Hey you effin pussy.' And then he's gone." Schley takes a breath. He can't help but let out a few chuckles. "That was the turning point for me," he says. "That afternoon I threw away my one-piece suit, bought a Sierra Design jacket and vowed that nobody at Whistler would ever call me a pussy again."

Schley has a surprisingly well-developed work ethic. And once he sets his mind on something, he usually succeeds at getting what he wants. "Whistler and Blackcomb hadn't yet merged," he recounts. "So there were two distinct cultures in the valley. I was definitely a Blackcomb guy." A long sigh. "Those were such exciting years. Everything was an adventure back then."

Having quickly found a gang of skiers to hang with - Eric Pehota and Trevor Petersen, Johnny Foon, Dave Sheets, Billy Stiles and other such hardcores - the young newcomer was soon honing his big-mountain skiing skills with the best. But the learning curve was steep. "I got spanked a number of times," he says with a sheepish laugh. "But I also got respect for going for it. My self-confidence grew too. The more I skied, the more I learned."