With all the recent hand-wringing over spiralling Olympic costs and over-runs and stupid budget decisions made by elected officials who should know better, one of the most positive aspects of hosting the Games next winter has been woefully overlooked
Jul 10, 2009 5:27 AM By: Michel Beaudry 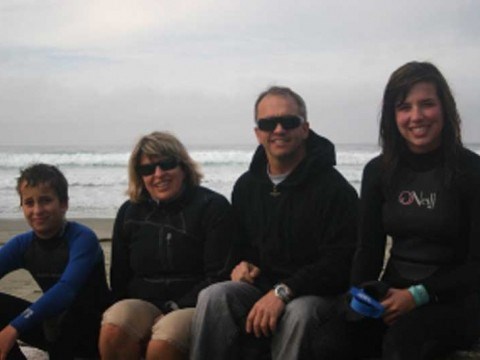 With all the recent hand-wringing over spiralling Olympic costs and over-runs and stupid budget decisions made by elected officials who should know better, one of the most positive aspects of hosting the Games next winter has been woefully overlooked.

Meaning? Simple: we're getting a whole bunch of interesting new residents around here. And they're all coming for the same reasons. Coaches, technicians, physicians, scientists, sports professionals of all stripes: they've all quietly migrated to Sea To Sky country over the last few years and months in an effort to better prepare Canadian athletes for top-level performances come February 2010. The interesting thing is that most of them have dragged their families along for the adventure.

And that little factoid, I believe, has the potential to completely change the social fabric in the region. Think about it. While some of these eminent sport pros will no doubt return to their home of origin post Games, many of them have been so taken with their temporary West Coast postings that they're tempted to put down permanent roots here once the Olympic parade moves to its next destination.

Consider the case of Robert Joncas. With a Master's degree in kinesiology, and an artisan's obsession for detail, the operations manager for the Canadian snowboard squad is a vital cog in the team's Olympic preparations. Whether it's developing a more efficient base material for his riders' boards, or tweaking a binding component, or simply sourcing a new, more aerodynamic racing suit for Canadian athletes, Joncas's role within the team is a direct reflection of Canada's new fascination with winning medals on the international stage. "This position wouldn't exist without the Own The Podium program," Joncas explains. "In fact, it wouldn't have even been considered a few years ago. But if we're serious about being the best in the world, this is a necessary first step. Given our goals with 2010, we have to find all the 'little things' the other teams aren't doing to give us that extra edge come race day." And that, he says with a smile, is what his job really entails.

Joncas has been involved with elite sports for most of his life. A former semi-pro hockey player - his modest physical stature masks a will of steel and a hard-edged toughness that allowed him to compete with much bigger and stronger opponents - Robert grew up in the little town of Newport on Gaspe's Baie-des-Chaleurs. "Because of my size," he explains, "I had to learn to work harder than my rivals. I also had to learn to work smarter." A trait, he notes, that has served him well in the three years he's worked with the Canadian Snowboard Team.

"I'm a bit of a gear head," admits the always-up 45 year old. "I'm also a good communicator; a good strategist. That's why they've put me in charge of all these 'top secret' projects. For me, it's a dream position." Another big smile. "It's not always easy. And it's rarely simple. But the challenges of the job really suit my temperament. I can't imagine doing anything else more fulfilling right now with my life..."

With the national snowboard team training on the Whistler Glacier last week, I took the opportunity of his presence in the valley to catch up with my old friend and find out how life was treating him these days. The last time we'd crossed paths Robert was still living in Quebec. But things had changed considerably since then....

Last August, Joncas recounts, his family - his wife Claude, and their two teen-aged children, Frederique and David - had made the life-changing decision to move west. "I really had no choice," he explains. "I'm a team guy. And the team needed me here." Still, the Joncas clan didn't make the move without seriously considering the consequences.

"We looked at it from every angle," says Robert. "And I can tell you it wasn't a last-minute 'let's go' decision." Which is no surprise. With a comfortable home - and a well-established, active lifestyle - at the base of Mont Bromont in Quebec's Eastern Townships, the Joncas family had much to lose by moving to the west coast. But in the end, says Robert (known to his friends as l'Bob), "the combination of Olympics, mountains, the chance to learn English, even the Pacific Ocean - it was just too great an opportunity to pass on." A pause. "I wanted my family to live the full B.C. experience - even if it was just for a year or two. To me, it was all about broadening our cultural horizons."

But once the Joncas tribe decided to make the plunge, the next decision was even harder. Says Robert: "Where do we move to? Whistler? Squamish? The North Shore? At first, we didn't have a clue." They eventually decided to rent a house in North Vancouver. It was a decision based on short-term practicalities (the Canadian Snowboard Federation offices, for one, were in nearby West Van). After all, the move was only supposed to last for a couple of years at most. At least, that was the plan...

"At first it was hell," admits Joncas. "It's so difficult to make a move like this. Finding a job for Claude (who held a prestigious, senior teaching post back in Quebec), making sure the kids were well settled in school - it was much harder than any of us had anticipated." He smiles wanly. "You can plan all you want. But it's still a shock when you arrive."

To make his point, Robert tries to paint me a picture of life back in Bromont. "It's a small little community, you know. The hill is all of 380 metres high. We all dress the same, buy the same gear, shop at the same grocery store. It's an insular place. We have a very narrow vision of the world." He stops speaking for a moment. Smiles painfully. And laughs. "Then you move here - and you're whole world view is destabilized..."

As he's quick to admit, their west coast start was less than auspicious. But things soon started to get better. "Claude got a great job working for the board of education here. So that took a lot of pressure off me." Still, he adds, "the kids struggled to fit in to their new school worlds. Even as recently as six months ago, I wasn't sure if we'd be able to stick it out until the Games..."

It's amazing sometimes how quickly things can change. Now on the cusp of their first anniversary in B.C., Joncas says his family's doubts are all behind them. Indeed, he admits moving back home to Quebec is not much of a priority any more. "Everyone has fallen in love with this place," he says. "And everyone is thriving now. Claude loves her new job, Frederique has made the B.C. Snowboard Cross Team and David is on the development team - so they're both stoked." A pause. A chuckle. "As for me, I couldn't be happier. As a longtime snowboard pro, I can say with no hesitation: B.C. definitely has the best snowboard development program in the country." Another burst of laughter. "So how can I drag my kids back to Quebec next year knowing that?"

His political outlook has even changed. "My nationalist tendencies have certainly been altered," he admits. "Now I'm not so sure I support an independent Quebec anymore." In fact, he says, he's never been prouder to be a Canadian. "We got in to some pretty hot discussions when we went back to Quebec for a visit recently," he explains. "We kept telling our friends: 'Get out of your comfort zone. Take a chance and travel to the West Coast. Come see what you're missing.'" He chuckles. "Some of them got what we were saying. But you really have to come west to understand what life is about here..."

Although a North Shore resident for the short term, Joncas is increasingly being tempted by the lifestyle he sees at Whistler. "Every time I'm on the mountain, it's always 'Wow!' Good weather, bad weather, fog, rain or snow, I'm totally blown away by Whistler's physical plant. And of course there's the locals' scene. The people are so outgoing, so friendly here. 'Hey Bob,' a friend will tell me. 'Follow me. I'll show you what this place is really all about.' And I get to fall in love with Whistler all over again..."

So what about the future? Any thoughts of setting down roots in Sea to Sky? "That would be a dream come true for me," he admits. "I'm not sure what's going to happen after the Games. But I'll have invested five years in the national team program by then and maybe it will be time to move on. Who knows?"

But what Joncas does know is that southwestern B.C. is going to play a big role in his and his family's life for some time to come. "My kids both got over 120 days on snow last winter. We travelled all over the province. It was an amazing experience." He stops speaking again. Resumes in a more serious tone. "People keep telling us how lucky we are to be living in B.C. Well, I can tell you, there was very little luck involved. We chose to come here. And it wasn't easy. It took the better of a year for us to get properly acclimatized to this place."

Leave it to the kids to have the last word though. "On a trip back to Bromont this winter," says Robert, "my son David turned to me and said: 'I never realized it before, but this place kind of sucks dad.'" He stops speaking again. Grins like a little kid. "That's when I knew that our move to B.C. had been a good one..."