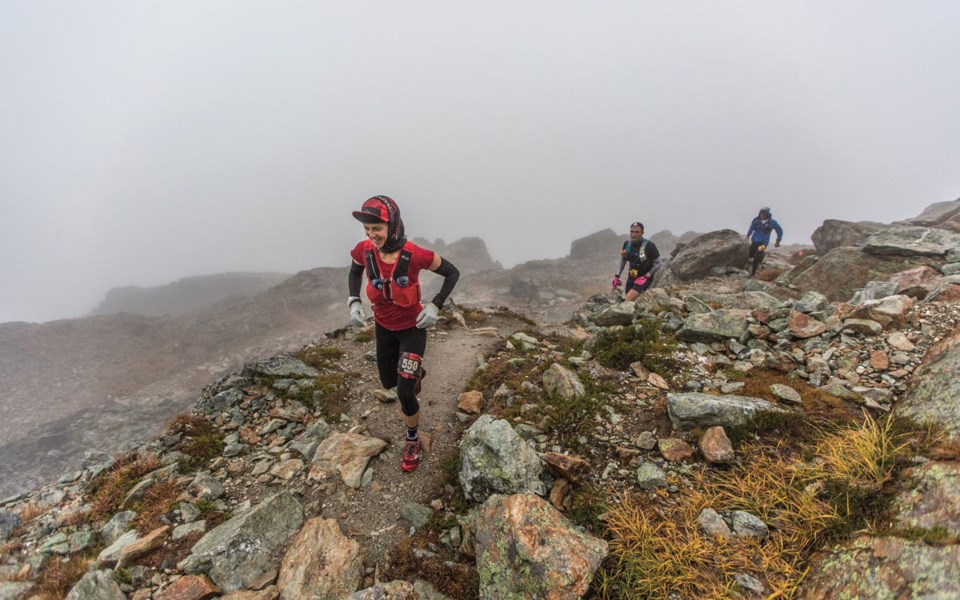 RUNNING FOR A CAUSE Maude Cyr will run 110 kilometres in support of the Howe Sound Women’s Centre on Sept. 26. PHOTO COURTESY OF MAUDE CYR

When Maude Cyr was a girl, growing up in Rimouski, Que., a friend of hers experienced domestic abuse. She confided in Cyr. When Cyr took this information to her parents, her parents did what was expected of them. They told Cyr it wasn’t any of their business. “Things that happen in a family stay in the family.”

“It was something that we had to keep secret,” remembers Cyr. She was frustrated by this, but kept it quiet, not mentioning it to any other adults.

The seed of her desire to protect children enduring violence within their homes began there. When she could actually do something, she would.

When she was 23, Cyr and her partner moved to Pemberton, started a family and Cyr started working as an educational assistant at École de la Vallée.

One day, the day before Christmas holidays, while supervising recess, a teacher at Signal Hill let Cyr know that she hadn’t left domestic abuse behind her.

“Can you believe there are more children than you think on this schoolground who are not happy to be going on a two-week break from school because their home is not safe?”

“When I look at all the children in the classroom,” says Cyr. “I hope each of them is secure in their family home.”

But the statistics are sobering: approximately two to six children and youth in every Canadian classroom have witnessed some form of abuse in the home over the past year.

That sparked a fierce protective fire in Cyr that only grew when the pandemic was declared and our worlds contracted to the size of our immediate family and the shape of our houses.

“Children and youth are an easy target for a stressed-out adult to express their anger and anxiety,” says Cyr.

We all felt an increase in stress when the pandemic was declared. Recalls Cyr: “I think it was a big adjustment for all of us.” We were drawing on our own tools for coping with the stress, anxiety and uncertainty, or realizing that we needed to develop better coping skills. Cyr started meditating five to 10 minutes a day, with the help of a practising friend.

“She helped me learn how to focus on my breathing, without being strict with myself and accepting my thousands of thoughts I had during meditation.”

It was one day, while meditating, that she came up with the idea: she would run to raise funds for kids experiencing domestic violence.

Running was something Cyr had discovered 11 years earlier, while experiencing post-partum depression. Medication was helping, but when she searched for effective ways to get serotonin hormones flowing through the body, the results kept pointing to exercise. Cyr had been completely focused on her infant son, and was mostly doing yoga.

“I needed something that pumped my heart quickly and efficiently. So one pouring rainy day, I took my sister’s running shoes, and ran off into the rain for more than an hour. I enjoyed every second of it. I became a runner.”

Running in nature has become her way to connect with herself. She runs almost every day—even if she’s not training for a long race. She surprised herself, at 36, by finishing third in 55-km mountain races in the summer of 2019.

“I think my deep love of racing has allowed me to reach the podium without even trying all year. I am just a woman who enjoys the movement of running in nature for hours! I like knowing that my body has the capacity to go where it wants and when it wants. And when I think about the human beings throughout history who’ve experienced war, genocide, famine, or just the people suffering in our community with illness, addiction, mental health, I know I am so privileged. I have everything I need to be happy. I can run and have a little pain in my knee, glutes or calf. Not a problem. I am grateful for what I have every day,” she says.

So, with her 2020 plans to race the 110-km Whistler Alpine Meadows Ultra cancelled, Cyr turned her energy and passion to the question that had been in her since she was a child: how can I help?

“I use my power as an educator to teach children and youth about violence and abuse. I talk to them about good touching and bad touching, personal limits, how to ask for help, healthy relationships, about their rights as a child. That way, I feel better knowing that they have tools in their tool box of life to protect themselves and become a balanced citizen, father, mother, friend and partner,” she says.

She also set herself the goal of raising $3,000 for the Howe Sound Women’s Centre for its programs supporting children experiencing violence.

On Saturday, Sept. 26, Cyr will strap on her running shoes, rain or shine, and set out from the Howe Sound Women’s Centre in Squamish, to run 110 km along the Sea to Sky Trail to Mount Currie. In doing so, she acknowledges and expresses her gratitude to be running on Skwxwú7mesh Nation and Lil’wat Nation territory, and connects with the entire Sea to Sky community and let them know that support services for children and young living with abuse and violence are there to help them.”

Her partner and her two children, aged 12 and four, will be her support crew, following in the car and bringing her nutrition and snacks. “There’s nothing better than the smiles of my children to encourage me.”

Several friends who share a passion for this cause have offered to accompany her along parts of the trail—and even though she had planned to run solo, Cyr welcomes the support. Anyone who wants to show their support for Cyr, or for the Howe Sound Women’s Centre, is welcome to make a donation. With two weeks to go, Cyr is more than halfway to her fundraising goal and every $300 raised will help another child benefit from a counselling program. Go to: canadahelps.org/en/pages/run-to-end-children-and-youth-from-violence-and-ab.

The Velocity Project: how to slow the f--k down and still achieve optimum productivity and life happiness, appears here occasionally during COVID-19.