"I'm totally in love with Whistler. The snow, the forests, the people - I love it all! The soul of this place really speaks to me. I just can't get enough of it..." - Chamoniarde Sam Bernos The first time I saw her ski I thought she was a boy.
Mar 4, 2011 5:30 AM By: Michel Beaudry 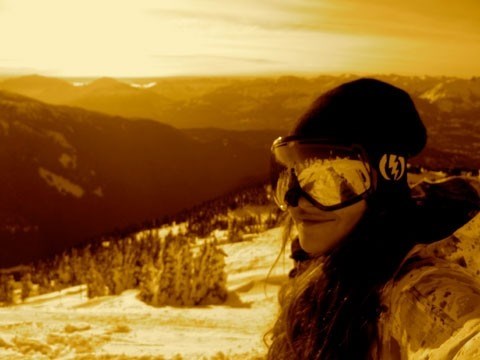 "I'm totally in love with Whistler. The snow, the forests, the people - I love it all! The soul of this place really speaks to me. I just can't get enough of it..."

The first time I saw her ski I thought she was a boy.

It was April of 2008. We were high above France's Trois Vallées - scoping out a new venue for the upcoming North Face Ski Challenge (Europe's top junior freeride event) - when I caught sight of a young athlete picking his way through a rocky, nasty stretch of Val Thorens real estate. And he was doing it with verve, flowing from turn to turn with grace and power. No wasted motions. No self-aggrandizing theatrics. Just solid self-assured skiing. He made the difficult mountain terrain look ridiculously easy.

I was impressed. "So who's the kid over there," I asked Chamonix coach Greg Liscot. He beamed with the pride of a new parent. "She's my top girl," said the usually gruff-voiced freeride vet. My face must have betrayed my surprise. You mean...? He just laughed. "Quite the skier, eh? And she's just 18! Her name is Sam Bernos and I think she's gonna make some waves on the pro circuit..."

Imagine my surprise then when I received a Facebook message from Sam this past fall. "Salut Michel," she wrote. "You won't believe where I'm gonna be skiing this winter. I'm coming to Whistler! I'm so excited, I can hardly stand it. Can't wait to make some turns with you."

Intriguing message. Would the young Chamoniarde like Whistler? Would it live up to her expectations? And how would it affect her views of Canada? Of skiing? Of life? By mid-February, I figured she'd been in Sea-to-Sky country long enough to know. Would she be willing to do a little story with me on her Whistler experience now?

"Bien sur, Michel," she said in her lilting Savoyard accent. "I'd love to. Let's get together and chat." So that's what we did.

Like Whistler, Chamonix is considered something of a cultural hub for global Snoweaters. But while hordes of riders from various countries call La Vallée du Mont Blanc home, few have had the good fortune to be born there. And even fewer have had the kind of insider's access that Sam Bernos grew up with.

"My dad's a mountain guide and ski instructor," says Whistler's newest Gallic 'gap-year' visitor. "My mum is general manager at the Hotel Albert 1er." She chuckles at my stunned expression. The hotel - and its celebrated Michelin-starred restaurant - is one of the most respected in the region. As for being an accredited alpine guide in Chamonix - need I say more? "Yeah," she agrees.  "I guess you can say I had a privileged upbringing - at least as far as the mountains go."

She stops speaking. Takes a breath. "But you know," she says, humour dancing in her dark eyes, "my own parents weren't born there, so we're not really considered 'true' Chamoniards. That title's reserved for only a handful of old families." And then she laughs outright. "Unlike at Whistler, it takes a while to become a local there..."

Speaking of Whistler - she's just come back from another big powder day, and the happy, sun-kissed lines on her face reflects well her passion for mountain adventures. "I'm just beat," she says, her voice nearly purring with pleasurable fatigue. "We really had a fun session out there."

Which begs the question: Does she ever have a bad day?

I didn't think Sam's smile could get any bigger. But the moment I ask the question, her grin spreads even further across her face. "In the mountains? At Whistler? Of course not!"

And then she explains. "I've never seen so much snow in my life," she says. "Sure, the Whistler backcountry is a lot less steep and dangerous than Cham is - the stakes are definitely not as high here - but the terrain is spectacular. And the forests!" The French have a term for this kind of topography - ludique - which has no real equivalent in English but can be roughly translated as 'playfully fun'. "Exactly," she says. "Le terrain est absolument ludique ici. I mean, stuff like 'pillow fields' - we just don't have that in France..." And once again, she chortles happily.

"I've never seen so many keeners either," she continues. "Not even in Cham! People at Whistler are so passionate about their mountain play. Sure - that means the runs get tracked up here faster than anywhere I've ever skied before. Still, for me, this is as close to heaven as you can get without wearing wings..."

Sounds positive. Her Whistler sojourn has been a success then? "Absolutely," she answers. "And then some." More laughter follows. "I'm living in a house full of boys - three French and three Quebecois." She stops speaking. Takes a long breath. "Funny, you know. The more I live with boys, the more boy-like I become. And I like it. I mean, boys are a lot simpler than girls. They can really pare things down to what really counts."

As for the economics of her situation, she admits she's still surprised by the cost of life in Canada. "Things are so expensive at Whistler! And the jobs - they pay so little!" But at the same time, she adds, she's much less apt to go out and spend money in Whistler the way she does when she's in Chamonix.

"My lifestyle here is not at all the same as at home," she says. "No way could I live this way in France."

Meaning? "It's just a more materialistic place," she explains. "More pretentious. You end up spending a lot of money for nothing. You know, just buying stuff - clothes, make-up, sundry creams..."

She lets another grin dance across her face. "People are way more connected to nature here. Way more into healthy living. So even though life is more expensive at Whistler, I end up spending way less money."

But don't get the wrong idea she hastens to interject. "I love to party. Love to socialize. I go out WAY more than I did back home. But somehow going to the bar seems more affordable here. I guess it just depends on where you hang out."

I'm still curious about her decision to move to Whistler this winter. The last time we'd seen each other, she was just about to launch her big-mountain pro career on the European freeride circuit. It looked like her future was assured. So what happened?

"It's kind of strange," she tells me. "As you know, I had a pretty successful career as an alpine racer." She stops. Sighs. "The pressure of racing gates never got to me. Au contraire. It motivated me." But that wasn't the case with big-mountain contests. "I don't know what it is about competing on the freeride circuit, but it seems I just can't keep my feet under me. I lose all my focus..."

Last year, she says, was a total disaster. "I made it into a few big events, but just couldn't get my act together." She shrugs. "I love skiing big-mountain terrain; I love pushing myself and seeing what I can do there. It just happens that I don't really enjoy the contests. I'm really close to my dad and he told me: 'If you're not doing well at it - if you're not really feeling it - then maybe you're not supposed to be there.' I think he's right."

Any regrets? "Are you kidding," she asks. "It's been an amazing experience. For years, my parents have talked about pulling up stakes and moving to Western Canada - did you know we have First Nations ties? Well, I figured I'd see what it felt like." One last smile. "And now I know. I love the person I am when I'm living here. I love this way of life. I could easily see us settling in Canada."

A few days after our conversation, I received a heartbreaking message from Sam. "Fell down the stairs today," she wrote, "and sprained my ankle and broke my foot... Looks like I'm going to be out for a while." I could feel her pain almost like I was standing next to her. She continued: "As soon as I got the news, I realized that I had to return to France immediately (if I can't work and can't ski I can't live here). My Whistler dream is over. Tears are streaming from my eyes..."

But young Bernos is not a woman who gives up easily on her dreams. "Et puis 'non!'," she wrote to me soon after. "This country still wants me, so I'm staying. I'm going to cook up a whole batch of fresh projects, and I'll continue working - sitting down! - until this nasty foot heals and allows me to attack new downhill adventures. Well, that's about it for now. Just wanted to share the good news with you..."