Just do it. Interesting, isn't it, how some people are okay with standing on the sidelines while others leap into the churning stream of life and start paddling away like it was the most natural thing to do. Consider Ottawa's Nathalie Gervais.
Oct 9, 2009 9:53 AM By: Michel Beaudry 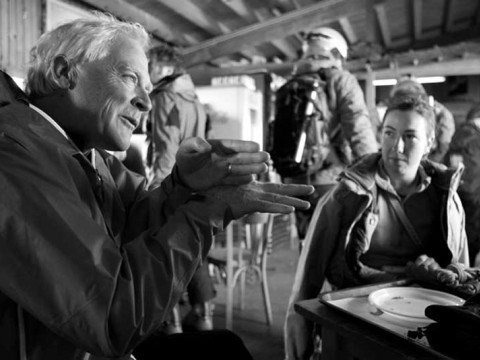 Just do it. Interesting, isn't it, how some people are okay with standing on the sidelines while others leap into the churning stream of life and start paddling away like it was the most natural thing to do. Consider Ottawa's Nathalie Gervais. Barely 27, the young mountaineer has experienced more alpine epiphanies than most of us could imagine having in a lifetime. And yet, in her eyes, she's barely scratched the surface...

We're sitting at a modest little café in a tiny medieval mountain village deep in the French Alps. Nathalie is nursing a Weiss bier while I negotiate a coke. We've just finished what many around here consider to be the best big-powder day of the season. Eight-thousand foot descents and waist-deep snow, sphincter-puckering lines and great company. "You're a lucky guy," she tells me. "You timed your arrival here perfectly..."

But this story isn't about me. It's about the dynamic, young woman with the million-dollar smile I've been skiing with all week...

So where was I? Oh yeah. Like many frustrated eastern racers, Gervais decided to head for real mountains the moment she graduated from high school. And like so many before her, she didn't have a clue what she was getting herself into. "I moved to Banff with slalom skis," she says with a self-deprecating grin. "I thought I was such a good skier. But I couldn't ski powder to save my life." She takes a breath; her eyes crinkle with amusement. "Finally I figured out that powder was all about hucking. That's when I started having fun." Another long pause. Another burst of happy laughter. "I couldn't land anything of course. But it didn't really matter. I was having a blast."

After spending the next fall and early winter touring around Europe - "but not skiing!" she says - she returned to Banff for the 2002-03 season. And promptly tore her ACL. "So I went back to Ottawa for surgery." There was no way she was going to stay in Ontario for the winter however. "So I went down to Mexico for five months," she says. "I volunteered for an eco-tourism project there to see if I'd like to pursue that kind of thing." She sighs. "I realized I wasn't ready to change the world; I wanted to have fun..."

That realization marked a major turning point in her life. Instead of enrolling in architecture and environmental design, Gervais opted for a nine-month long mountain skills training course at the College of the Rockies in Fernie. "That's where my love affair with climbing started," she tells me. That's also where she discovered the esoteric pleasures of ski touring. "It was a pretty lousy snow year," she says, "so we really had to hike for our turns. My touring went from nothing to BIG TIME."

Imbued with a new passion for all things vertical, Nathalie and a friend decided to check out the American climbing scene that summer. "We did 'em all. You know: Smith Rock, Yosemite, Red Rock, Joshua Tree." A long pause. "We thought we were pretty good climbers when we set off. Not..."

Her first "industry job" came the next winter. "I applied for a pro patrol job at Castle Mountain in Alberta," she recalls. "During the interview, I was asked all the usual questions. Do you have your avalanche ticket? Do you have your first aid ticket? Can you ski?" She takes a sip of beer, grins like a little kid. "The most important question of the three was 'Can you ski?' All I did that winter was throw bombs and ski powder..."

Castle, she says, was like a hidden mountain jewel. "It's a great place. Not many tourists. Everyone knows everyone. But it's so redneck! I never liked country music before. But it's infectious. After a season at Castle I was two-stepping with the best of 'em."

She attempted her first big peak ascent later that spring with two Castle Mountain buddies, Cory Boschman and Steve LeMaistre. The highest peak in Alberta, Mount Columbia, turned out to be a tougher test than the trio had anticipated. Especially given their shoestring budget and seat-of-the-pants preparation. "We went up the wrong way," she moans. "We were 150 feet from the summit when we were forced to turn back because of the weather. It was epic - a seven-day trip with four of those in a whiteout. It was my first time with a heavy pack and ropes and no one to follow." She stops speaking. Looks out the window at the darkening March sky. "We made it out alive. That was our victory - but we also realized how much more we had to learn."

Which was fine with Nathalie, as long as she could keep feeding her mountain sports habit while she was learning. And feed it she did. Whether it was solo car trips to Alaska for some serious alpine adventures - "my first trip north," she chuckles, "was in a shitty ol' Mazda with duct-taped windows and no heating." - or guiding hikers in Banff or even travelling with a British friend to Corsica for some high-end sports climbing - "I didn't have any money or any apparent means of getting there," she says, "but I made it happen anyway" - the young Snoweater was definitely broadening her skills base.

In the fall of 2006, Gervais returned to Calgary only to discover that her storage locker had been broken into and all her winter gear had been stolen. What to do? "It was the end of climbing season. I was broke as usual. So I went to a local ski shop to see what I could dig up." She smiles. "That's where I saw this ad: 'Live Your Dream - Salomon Women Will.' And I figured: why not?" Turns out Salomon had launched a contest whose goal was to encourage women to lead big-mountain ski expeditions. It was a contest made for Nat. "The rules were simple: all you had to do was write an essay on why Salomon should send you to your favourite exotic location for a three-week adventure. Seeing as I had a lot of time on my hands, I decided to go to town and put a good little story together."

Her dream destination was Sam Ford fjord on Baffin Island. Her companions would be Castle Mountain buddies Cory and Steve. And her goal was to ski some of the massive couloirs found in that part of the Arctic.

Winning the contest was quite a shock. Finally unpacking the gear in Northern Baffin Island three months later and watching the team's only link to civilization wave goodbye and fly away was almost surreal. "I could talk for hours on that trip," she gushes. "There we are, just the three of us. No guide, compass doesn't work this far north, and we have a gun in case we're attacked by polar bears." She laughs. "But none of us had ever shot anything before. Thank goodness we never had to use it."

And the trip itself? "It was truly life-changing. I didn't want to go home..." But she did. And promptly took a job guiding with Outward Bound in Alaska. That winter she moved to Golden and decided to dip her toe in Canada's burgeoning freeski contest pool - and somehow managed to win the '07-08 title. Still, she wasn't convinced that competitive freeskiing was where she wanted to devote her considerable energies.

"So that spring I went back to Alaska for some quality touring time." Quality touring indeed. In the space of a month, Nathalie pulled off two hoary ski trips - the classic Eklutna traverse north of Anchorage and the harrowing Seward-to-Haines traverse across the rugged Kenai Peninsula. "The first trip was completed in nearly perfect weather conditions," she tells me. "It was a cakewalk. But the second was another epic. It took us 11 days to get to Haines; all but half-a-day in bad weather. It was really tough."

Her plan was to spend the rest of the summer working in Alaska. But with Nathalie, nothing is ever simple. "I had some visa issues," she says trying to stifle her giggles. But she doesn't go into details. Besides, she still managed to find her way onto a commercial fish boat based out of Haines. "These guys needed a deckhand on their halibut boat," she says with a straight face. "How could I refuse?" And then she laughs again. "What a rush! Being on the open water like that - it was quite daunting... but magical too."

By the fall of 2008, she was ready for a new challenge. Why not Europe? "Salomon was flying me to France for a big Women Will press conference anyway," she says. "So I decided to do some research and find out where I should go for the winter."

Which is how she came to wash up on the shores of La Grave. "It's been the perfect choice for me," she says. "Way quieter than Chamonix. And cheaper too. Not much glitz here. Yet the riding is top-notch." She smiles. "Really top-notch! It suits my needs perfectly right now."

And it might for some time yet. Here's what she had to say about her upcoming plans in a recent e-mail. "I've decided to head back to La Grave for a second winter," she wrote me a few weeks ago. "Your comments about how you'd spend a few seasons in La Grave if you had the chance, and this being the years for me to learn lots and to really blossom, helped me to make up my mind."

So there you go. Now if only my daughters would listen to their dad's advice like that....