One unseasonably chilly evening this August, crowds gathered around the stage at Whistler Olympic Plaza enraptured by a septuagenarian with boundless energy and a distinct warble.
Sep 12, 2019 12:00 AM By: Alyssa Noel 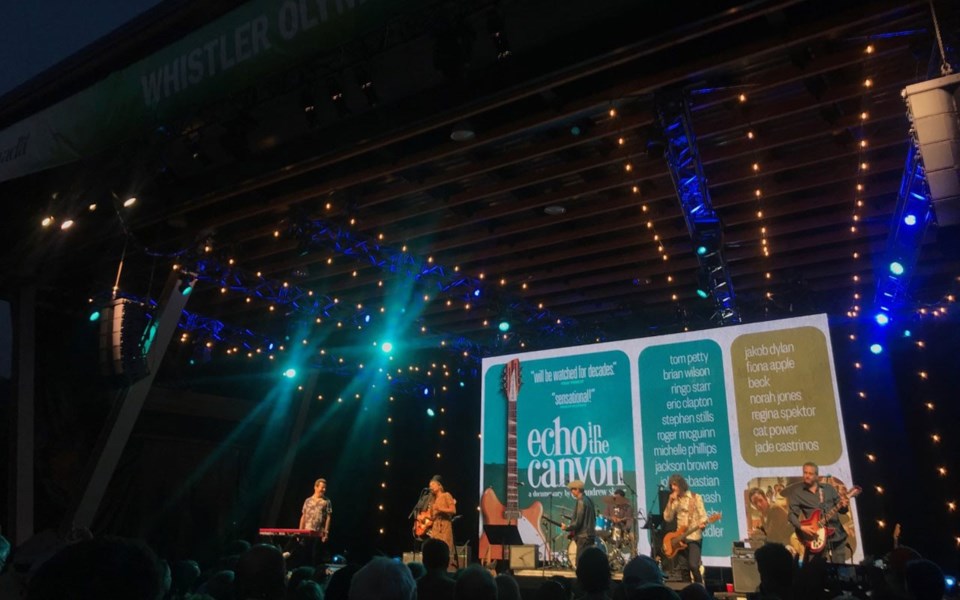 Jakob Dylan, during a Q & A session, after a screening of the rock doc Echo in the Canyon at Whistler Olympic Plaza this summer. Photo by Alyssa Noel

One unseasonably chilly evening this August, crowds gathered around the stage at Whistler Olympic Plaza enraptured by a septuagenarian with boundless energy and a distinct warble.

Buffy Sainte-Marie, a Cree Canadian-American musician who has won an array of awards over her 50-plus-year career, shared stories of her activism, displayed her wide-ranging repertoire, and, as a whole, offered everyone in the crowd something to aspire to.

To top it all off was a special, impromptu moment in which Lil'wat Nation drummers in the crowd slowly and subtly broke into song as everyone was waiting patiently for an encore.

It was not a show I ever thought I would see—for free, no less—in Whistler. The Whistler Presents Summer Concert Series officially wrapped up last weekend and I would argue it's the best lineup I've seen in my seven years here.

As a whole, it struck a perfect balance for a free outdoor series that has to have mass appeal and still draw discerning music fans. The names were big, the music compelling, and the genres diverse.

Considering I serve as Pique's arts editor, it's perhaps not surprising to hear that I spent a lot of time thinking about Whistler's arts and music scene. I could easily present an in-depth analysis here, but that might be anticlimactic after the monkeying around that was last week's editorial.

Instead, I'll say this: Whistler's arts scene has been on a remarkable upward trajectory since I first took this seat in 2012.

And that's never been more apparent than it has looking at the art events taking place this fall. For one, the Audain Art Museum (which is certainly to thank for its share of interesting art events in the resort in the last several years), is hosting its new exhibit, Emily Carr: Fresh Seeing, starting on Sept. 21. Rather than an offering an array of Carr's paintings, it will examine three specific years in her career and the impact it had on her work.

Across the street at the Maury Young Arts Centre, Arts Whistler is also set to host the premiere of útszantszan, a one-woman play written and starring Yvonne Wallace, a member of the Lil'wat Nation who grew up in Mount Currie. The play—which centres around the relationship between an aunt and her niece and focuses on the importance of language—is running for four nights, which is a first for the venue in my memory.

For context, even the uber-popular Chairlift Revue, which featured a series of skits that all take place on a chairlift, only ran two nights in a row.

It's a bold move on Arts Whistler's part—putting on a one-person show that's partly in Ucwalmícwts language—but one that's worthwhile.

Arts Whistler has spent the last several years establishing the fall season under the slogan "Fall for Arts." Summer sports are winding down, October rain is arriving, and the mountains are not yet open. Why not head indoors (or, in the case of the Hear and Now Festival, throw on a sweater and enjoy some local bands around the village) and enjoy some time taking in art?

It's worked. With a non-stop list of shoulder season events, it's worth pushing the boundaries on what we expect a typical Whistler audience to enjoy—namely reggae, landscape art, or anything to do with mountain culture.

That's not to say we should shun the tried-and-true favourites; rather, the time is right to expand offerings to include fresh, new, innovative art that, for whatever reason, we might not have been ready for.

In the past, it's almost seemed greedy to ask for world-class art alongside our world-class mountain sports. Now, it seems inevitable.

So, if you want to see Whistler move in this direction, be sure to get out there and attend a new event or two this season. You just might be surprised by how much you enjoy something entirely different.

THE OUTSIDER: Dog days for Doglotion.com
Jun 28, 2020 8:45 AM
Comments
We welcome your feedback and encourage you to share your thoughts. We ask that you be respectful of others and their points of view, refrain from personal attacks and stay on topic. To learn about our commenting policies and how we moderate, please read our Community Guidelines.