Struggling up an unnamed peak on the western slope of the Rocky Mountains, a biting north wind was tearing body heat away as fast as I could generate it.
Mar 23, 2016 6:00 PM By: Leslie Anthony 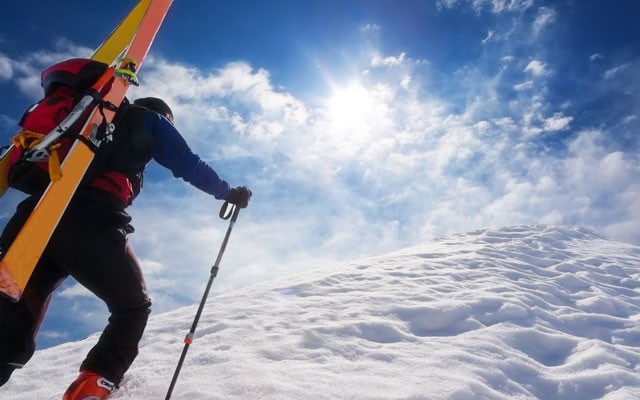 Awareness Skiing takes you into the moment, focusing on the experience. photo shutterstock.com

Struggling up an unnamed peak on the western slope of the Rocky Mountains, a biting north wind was tearing body heat away as fast as I could generate it. Kicking steps in knee-deep drifts, the windward side of my face frozen in grimace, I contemplated what it must be like to do this above 5,000 metres in the Himalaya, all day, every day, for weeks. Simply to stand on a peak and then walk back down. By yourself.

Infamous alpine soloists like Reinhold Messner come to mind in this regard, though they're a rare breed in the highly charged world of expedition climbing, where teamwork is method, partnership is tradition, and floundering on your own can mean certain death. In skiing, a sport with decidedly less consequence and a social ethos that virtually guarantees crowd formation, soloing in the wild is rarer still. Or at least less celebrated. Unlike solo climbers, upward progress for solo skiers equates with a more-or-less equal amount of downhill redemption, and it is this that propels us. Nevertheless we are reminded — for what are very legitimate safety reasons even for experts — not to do so at all. And yet all of us have, at one time or another, either dabbled or fully embraced the idea of skiing alone, whether at a resort, in the backcountry, or simply through the woods.

My mission that particular day in the Rockies was, in fact, to ski on my own for a few hours. The reality of what we think of as alone, however, is that you're often not. Your brain — a Tasmanian devil of neural machinery and mental chicanery — is still your constant companion. And it's hard to tell your best friend to shut up and disappear for a while. Besides the Himalayan question, it was hard to keep my mind from wandering forward to future turns and where the snow might be softest, or backward into any number of mental abysses: what was wrong with the world or whether anything was right; how to make more money; what I was going to write about that week; food; women; a song from Grade 11; emails that needed to be sent; and whether or not there was any such thing as true love. If this tide of thought couldn't be corralled into some Zen-like pool of stillness, then where could I find what I sought?

The answer came when I picked up enough speed to make that first turn. I was suddenly acutely aware of snow sifting around my legs, cold eddying in my nostrils, and sunlight scattering to every corner of the spectrum. The feeling was immediate, familiar and welcome. With your body on auto pilot, the brain simply gazes out the window; in the absence of thought exists a crescendo of sensation. You literally become what you're doing.

There are ski workshops that teach this kind of thing, but they make a point of not recommending solo missions to discover it. Yet this is most often where it's found. It's the reason that, although I love to ski with friends, I also enjoy skiing by myself (I don't actually like to call it "alone"), especially when pressed for time. Sure there are objective hazards in skiing that need to be considered at all times — and yes, more so when you're on your own — but I always keep things relatively mellow and within my sphere of self-rescue preparation (cellphones having become good tools in this regard). I suppose the reason this sounds so much like a confession is that solo skiing isn't for everyone, and can be truly risky business in a place like Whistler Blackcomb if you aren't intimately familiar with its nooks, crannies and folds. But whatever. Back to the flakey stuff.

In The Power of Now, Eckhart Tolle distills centuries of teachings by dozens of spiritual movements into one key notion: only in the moment can anything truly be experienced for what it is, and nothing that came before or will come after matters. The notion of skiing alone is the moment. When your brain stops talking and you start feeling. And fortunately, skiing's nature makes it a peculiar form of soloing regardless of what surrounds you. Whether in the delicious swoop of your first snowplow turn or gripped with fear in a Chamonix couloir; whether deep in the breath-stealing ecstasy of Niseko's white room or hanging in the middle of a Tail 900 above Chad's Gap; whether barreling 130 kph down Kitzbühel's Hahnenkamh or swooning from altitude in Aspen's Highlands Bowl.

Taken that way, alone can be by yourself or lost in a crowd. Feeling and experiencing in one moment and not in the next. Observing yourself or not. Alone is something that when sought, is frequently missed. It's also something we don't always set out to do as skiers, but very often find.