It had rained hard the day before, the freezing level climbing perilously high before dropping overnight with a skiffle of snow ushered in by a passing cold front.
Feb 16, 2020 12:00 AM By: Leslie Anthony 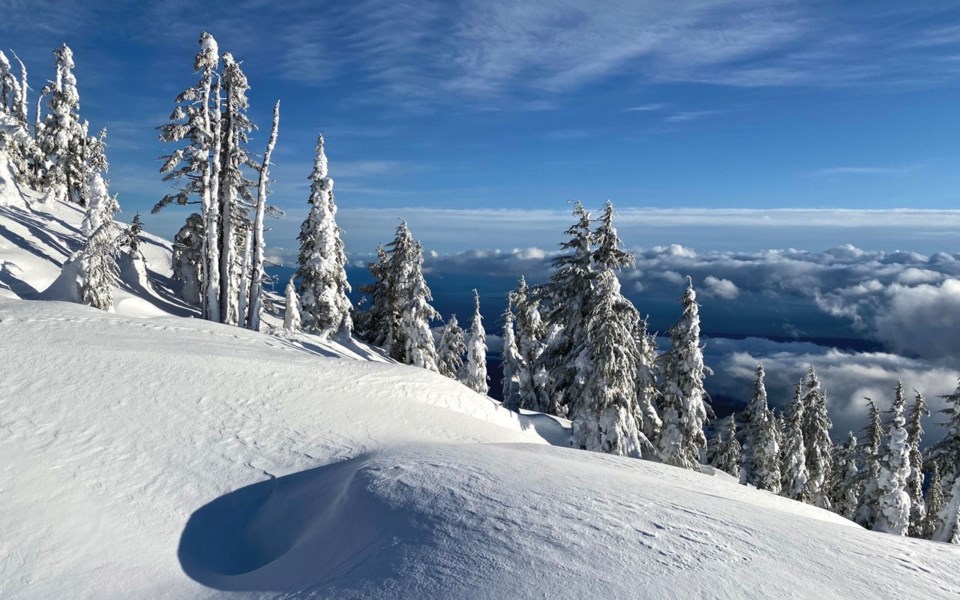 It had rained hard the day before, the freezing level climbing perilously high before dropping overnight with a skiffle of snow ushered in by a passing cold front. That meant dust-on-crust up top, and less dust on breakable, quasi-crusted, isothermic snow down low—the worst combo in all of skiing. And yet, skiing the Pacific Northwest you get used to it. You abide. You adjust expectations. You make it work.

If there's one thing I've learned skiing Whistler over the years, it's this: always be prepared to enjoy the day—no matter the direness contained in weather or conditions reports. In fact, the unpredictability of coastal skiing makes pleasant surprises as common as nasty ones (nudge, nudge to anyone who, like I, enjoyed two fabulous "sleeper" powder days last week). An open mind is key, as is a knack for recognizing opportunity and a capacity to appreciate the tiniest of blessings.

Of course, it also helps if you know a resort and how to get around. As I've documented in this space before, it wasn't until my third visit to Whistler Blackcomb that I actually saw these mountains, understood how the various terrain aspects worked. But the prelude above doesn't concern Whistler. It's actually about another destination mountain even more affected by the coastal roller coaster of fluctuating freezing levels and high-water-content snow: Mount Washington on Vancouver Island.

The only way to have a ski area closer to the ocean is if it rose directly from it. And, on my first visit 20 years ago, it felt like we were literally out to sea, so thick was the fog and mist; on the zero-visibility steeps, snow was pliable but spring-patchy, so we switched gear and spent the day on the resort's treed Nordic trails. As an alpine trip it was a bust. This time will be different.

Despite ostensibly challenging conditions, it's full bluebird and no air of disappointment clouds the base; lifts spin early and excited skiers pour into the parking lot. Around these parts, sun is more an attractant than powder, and it doesn't take long to understand why. Vancouver Island's only full-service, all-season alpine resort boasts one of the most spectacular coastal alpine settings in North America, with views west to booter-shaped Mt. Edward Albert and the rugged peaks of Forbidden Plateau and Strathcona Provincial Park, as well as north and south over the Comox Valley and Beaufort Range, and east across the Salish Sea to the Coast Mountains.

Despite the icy veneer elsewhere, the groomers are exceptional. Riding Eagle Express and Sunrise Chairlifts, trees display the unmistakable bareness of having been doused clean by a great celestial force, the runnelled snow beneath lumped by the flocking they once enjoyed. Yet every ride ends with a breathtaking view and renewed commitment to the run. The infamous Outback area is still too thin to open, but no worries; the frontside surface improves as the day wears on and temperatures climb just above zero on the lower mountain, making for exceptional carving on consistent fall-line runs under the shuttered Whiskey Jack Chair, where the resort's night skiing takes place.

Mount Washington bears no relation to the eponymous American president. Instead, it was named for Rear Admiral John W., official hydrographer to the British Royal Navy, by a Captain Richards as he explored the Pacific Coast in 1860. The idea for a resort began in 1975 when avid skier and Campbell River businessman, Alex Linton, marvelled over the 1,588-metre a peak's 11-metre average annual snowpack and surveyed the mountain in his friend Henry Norie's helicopter. The following year, the pair purchased the land from a forestry company and hired Whistler's Ecosign to masterplan the resort that opened in 1979. A decade on, the founders sold to investors who upgraded lifts, terrain, buildings and roads. In 2015, that group sold the resort and most developable land to Utah-based Pacific Group Resorts. These days, the mid-Island resort located just 25 kilometres west of the Comox Valley and 50 km south of Campbell River boasts over 80 alpine trails served by nine lifts on 507 m of vertical, as well as 55 km of cross-country and 25 km of snowshoe trails with a dedicated Nordic lodge.

Washington is where Whistler's perennial favourite citizen, Mike Douglas, cut his alpine teeth. And though his legacy isn't marked (where's the gold statue?), the local charm and quirkiness he often regales me about abounds. At the top of Hawk Chair, a guy with a massive white beard who channels Santa Claus but dresses more like a Voyageur in a red wool blanket cinched with a belt and leather pouch, entertains two ravens he seems to know. They pick up food items from the snow as he points to them. When one fills its beak then turns to go, the guy barks "Hey!" and points to an overlooked piece; the raven dutifully returns to stuff that into its mouth as well, then flies off.

With the softer pistes and a handful of blow-in stashes discovered by our crew, we ski hard after lunch. As the skiing improves, however, visibility goes the other way, and by the time of our last run it's snowing too hard to even make out the trees.

But that's OK—I've seen all I needed to.