This week I'll spare readers (and myself) another diatribe on conservatives and the impending global environmental disaster they portend in favour of a mid-winter dive into something far more interesting.
Feb 21, 2019 10:00 PM By: Leslie Anthony 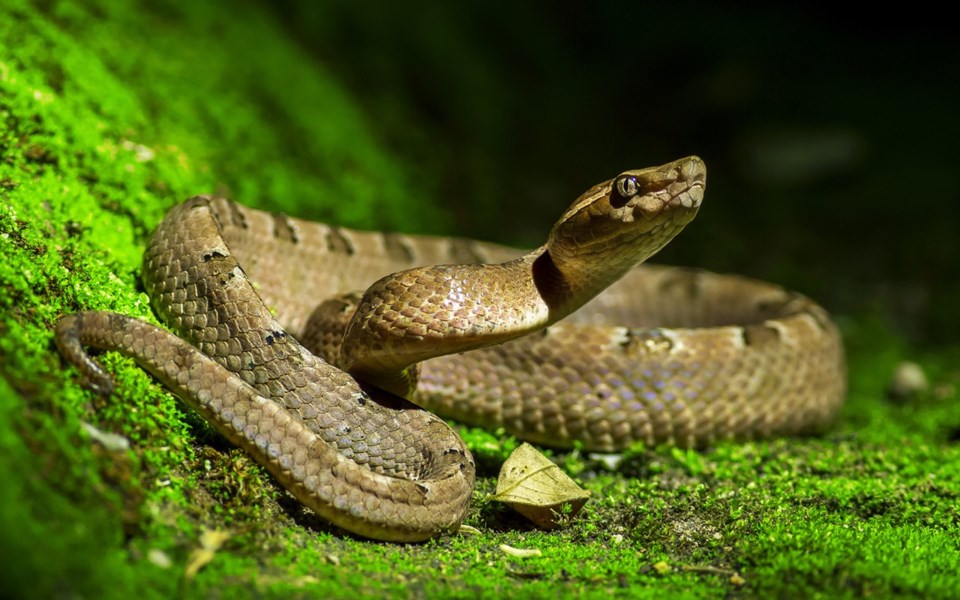 This week I'll spare readers (and myself) another diatribe on conservatives and the impending global environmental disaster they portend in favour of a mid-winter dive into something far more interesting. It's a unique little theory I first came across while writing Snakebit: Confessions of a Herpetologist, but the story has deepened and solidified in intervening years to show how natural affinities between organisms can be found in the strangest places.

The short version goes like this: higher primates, including humans, owe our marvellously acute vision and ability to sense incoming peripheral dangers to ... snakes. That's right, snakes. It's a capacity gained in our early days as tree-dwellers but one that opened up the world to us when we descended from the branches.

The concept was first proposed by Dr. Lynne A. Isbell, a professor of anthropology at the University of California whose area of interest is primate behaviour and ecology; her fascinating 2009 book The Fruit, the Tree, and the Serpent: Why We See So Well fleshes it out.

The longer version starts in comparisons of primate vision with that of other mammals. Primarily, our forward-facing eyes and extensive overlapping visual fields yield us greater depth perception, sharper visual acuity—including, in some species, trichromatic colour vision—and more brain-bits involved with it all. "In fact," writes Isbell, "what separates primates from other mammals most is their much greater reliance on vision as the main sensory interface with the environment."

Most of us are at least partially aware of this departure point. But what sort of selective pressures in early primate lineages could have driven evolution of such sharp vision? Isbell's 2006 "snake detection theory" handily answered that question. She hypothesized that when "large-gaped constricting snakes appeared about 100 million years ago and began eating mammals, their predatory behaviour favoured the evolution of changes in the vision of ... the lineage that was to become primates."

In other words, early primates were selected for an ability to spot lurking snakes before getting close enough to them to put themselves in the danger zone. When venomous snakes appeared some 40 million years later, it ramped up the pressure on primates to detect them, with further effects on our ancestors' visual systems.

The first line of supportive evidence is that among all primates, Old World monkeys, apes and humans collectively display the best vision; this lineage evolved at more-or-less the same time and place as venomous snakes, has coexisted with them for 60 million years, and comprises species that are, to this day, basically freaked out by snakes. Conversely, the lineage that evolved on the island of Madagascar have the poorest overall vision among primates, and, having never lived with venomous serpents, aren't all that worried about them.

In a 2019 article, Isbell discusses studies that occurred since she proposed her theory which show human and non-human primates in our lineage to display "a visual bias toward snakes compared with other animate objects, such as lizards, spiders, worms, birds and flowers."

What does "visual bias" mean? Well, it turns out these reptiles light up a key area of our brains: we can pick out snakes more quickly and accurately than other objects, especially in difficult and cluttered conditions like the chiaroscuro lighting of a forest or savannah—exactly where you might find a snake—and this ability increases when our time to do it is limited. We can also more readily recognize snake scales than those of lizards, or the feathers of birds, and neuroscience studies show that our group of primates even has snake-sensitive neurons in an area of the brain that has expanded only in this lineage.

In her original 2006 article, Isbell also noted how evolution of such high-powered vision must have come with increased metabolic and neurological demands that required specific molecular precursors, all of which may been present in early primates' fruit-filled diets. Fascinating stuff.

The snake detection theory ultimately brings new biological sense to our dichotomous fear-fascination attitude when it comes to these animals. As Isbell sums it: "Our long evolutionary exposure to snakes explains why [fear of snakes] is humanity's most-reported phobia but also why our attraction and attention to snakes is so strong that we have even included them prominently in our religions and folklore. Most importantly, by recognising that our vision and our behaviour have been shaped by millions of years of interactions with another type of animal, we admit our close relationship with nature."