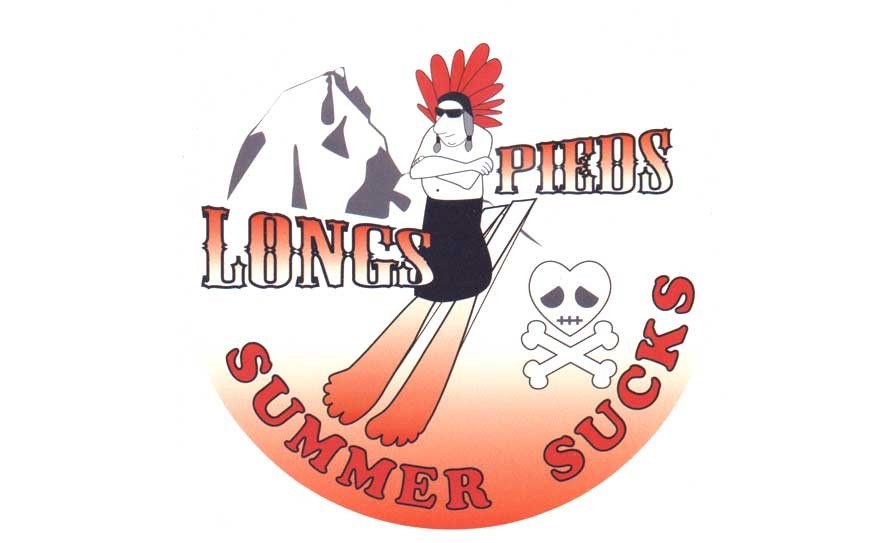 It had been a busy ten days. From the Andorran Pyrenees to l'Oisans, from l'Isere to Haute Savoie, I'd managed to hit five different mountain resorts that I'd never visited before. And I'd been able to enjoy the only powder cycle the Alps had received since early February. I was feeling mighty satisfied with my European sojourn so far — if still a bit sleep-deprived.

But my host wasn't finished with me yet. "I've got a real surprise for you," said Serge Dupraz, his eyes twinkling with mischief. "A group of my friends are having their annual reunion this weekend at Avoriaz. And you're going to be the guest of honour. Be prepared for some serious fun."

And then he really scared me. A gathering of Le Club des Longs Pieds, explained Serge, was not for the weak of heart. Nor for the weak of liver. The members of the club, he went on, had all been ski instructors at Avoriaz during their student years. And while they'd gone on to become doctors and pharmacists and dentists and architects, the hard-charging group of fiftysomethings loved nothing more than to gather in the mountains to relive the madness of their misspent youth. "You should fit in just fine," he told me with a straight face. "They love to ski hard and they love to play hard." He paused for a long beat. "And Manu, our host for the weekend, boasts one of the best wine cellars in all of Haute Savoie. I'm sure you won't be bored."

Considered by many as the jewel in the vast Portes Du Soleil ski domain, the village of Avoriaz is something of an acquired taste. Built on the snowy rump of a massive cliff at nearly 2,000 metres of altitude, its many-coloured B.C.-timbered buildings are like nothing else in the ski world. It's almost as if Dr. Seuss had been retained to design the architecture. There's something about the village that seems off-balance somehow — eccentric, out-of-place — like it's just waiting for the right storm to blow it off its precipitous perch. As for the lifts, they wind their way through the village's towering apartment buildings, offering intimate views (sometimes too much so) of vacationers' interior activities. Both voyeurs and exhibitionists are well served.

Fortunately, said Serge, we wouldn't be staying in the village. "Manu bought a beautiful old slopeside chalet some years ago just a few hundred vertical metres below Avo," he explained. "And he completely redid the interior. He's got enough beds for the whole gang there. I think you'll find our lodgings quite satisfactory."

I just nodded. I was slowly becoming familiar with Serge's wily ways. The weekend reunion, I knew, was going to test me to my limits. But I girded my loins for battle. No way was I going to show weakness. Canadian honour was at stake.

We left Thonon-Les-Bains early on Friday morning. There wasn't a cloud in the sky; already the thermostat was pushing 15°C. It seemed more like a day for sailing than a day for skiing. Serge ignored my questioning glance and kept on driving.

Situated on the bucolic north shore of Lake Léman, just across the waters from Lausanne, Thonon (like next-door Evian) has been renowned for its healing waters since the time of the Romans. A sometime-summer home for the Dukes of Savoie during their 500-year reign over the region, the spa town of 40,000 seems a world away from big-mountain fun. But don't let appearances fool you. No matter where you find yourself in Haute Savoie, skiing is never very far away.

And like other Savoyard destinations, our 35-minute drive up to Avoriaz was like a journey through the looking glass. Slowly the vegetation changed. The quiet little roadside stream grew in volume until it was a rushing, dancing torrent. The valley narrowed. The road steepened. Suddenly alpine peaks began to appear through the forest of pine and yew. Steep and rocky and intimidating. And oh-so beautiful.

As usual we were late. We rushed through the classic village of Morzine — so many British tourists! — and swung into the final looping hairpin turns that take you high above timberline to Avo. I was almost feeling seasick by the time its Seussian buildings came into view. But the scenery was a mountain lover's delight. I soon forgot about my heaving tummy. So much to see. So much to take in. "Just over the ridge there," Serge pointed, "is Switzerland. I'm sure the group will head there first thing. There's a lot of good off-piste skiing over there. And the snow is usually better. And of course, there's the Fendant..."

Meaning? A legendary white wine only grown on the sunny south-facing slopes of the Swiss Valais region, the Fendant has a glowing reputation with visitors to Portes du Soleil. And I was soon to find out why.

But first we had to find Les Longs Pieds. Which didn't take all that long. Have you ever encountered a group of people that made you feel welcome right away? That drew you into the bosom of their company like a long lost cousin? That dispensed with the formalities and started teasing you the moment they met you? I'd been warned. I was prepared. But the warmth of the Longs Pieds' greeting still took my breath away. There was Manu and Jean-Phil and Fifou and Isabelle and Patrice and Jeff and... They came from Biarritz and Strasbourg and Grenoble and Toulouse... and Thonon of course. And they had a joie-de-vivre that was almost palpable.

"Enough talk; let's hit the slopes," suggested an impatient-to ski Fifou. "There's a great little couloir nearby that drops us right where we want to go. It's just over the ridge. Who's up for it?"

Turned out the "little" couloir was a rather steep, exposed exercise in precision-skiing that didn't appeal to the whole group. While Fifou, Jean-Phil, Serge and I attacked the precipitous — and in some places sluffed-to-ground — gully, the rest of the party chose a more casual path to our destination. And yet. And yet. The snow had just softened enough — the top layer was just grabby enough — that the ski down was like a kiss from the angels. Spring corn at its best. And my smile was tickling my ears by the time we reached the valley.

"It was a really weird winter," explained Jean-Phil when I asked him about all the to-ground avalanche debris around us. "Until late in December it was so warm outside that we were still having picnics on the grass here. Then the snow came. And it dumped and it dumped and it dumped! But the ground never got a chance to freeze. So when the weather turned warm again a few weeks back, well, you can see the results. Everything just let go..."

Indeed. And maybe the others hadn't been so crazy to choose the long way round. But the sun was shining, the stunning Dents-du-Midi massif was bathed in glorious light and I was in the company of like-minded crazies who loved the same things I did. Still, I made sure to keep my antennae well tuned to the ambient conditions as the sun warmed up and the day progressed. No need for extra excitement.

I know it's not that big a deal. But for me, skiing from one country to the other still has a magical appeal. Call me romantic, but I just love the idea of touring from village-to-village, grokking on the unique buzz of each mountain valley along the way. And nowhere is that easier to do than in Portes du Soleil's twelve linked resorts. "Let's head over to Champery," suggested Fifou after a few (more casual) runs in the French quarter. "I know where there's still some good snow on the Swiss side. It's all north-facing. Could even be some powder left over...."

Patrice, the senior member of the group, suddenly piped up. "And what about a lunch stop? " And then he laughed. "After all, I didn't come here just for the skiing. Why don't we stop at that little shepherd's hut above Champery. It's right on the way..." Most everyone nodded happily in agreement. The aggros in the group (Fifou and Jean-Phil... okay, and me too) tried to hold out for another run or two. But the others in the posse wouldn't hear of it. Time for a Fendant stop.

And that's how I found myself sitting on a sun-kissed terrace on a Swiss mountainside with one of the most stunning alpine backdrops found anywhere in the world, surrounded by a joyful group of skiers, eating local sausage, sharp cheese, fresh bread... and drinking the sweet nectar of the alpine gods.

I could try and describe the taste of Fendant. But it wouldn't be enough. I'd have to include the tangy smell of the pine trees around us, the soft breeze bringing hints of summer from the valley, the easy-going camaraderie of my new friends, the scenery, the warmth of the sun, the Swiss oompapa band playing in the background. And even then, I'm not sure I could convey the perfect happiness of that moment. Sometimes, you see, it's not just about the powder...