An odd thing happened today on the way from Dawson City to Whitehorse.
Jul 28, 2019 2:00 AM By: Leslie Anthony 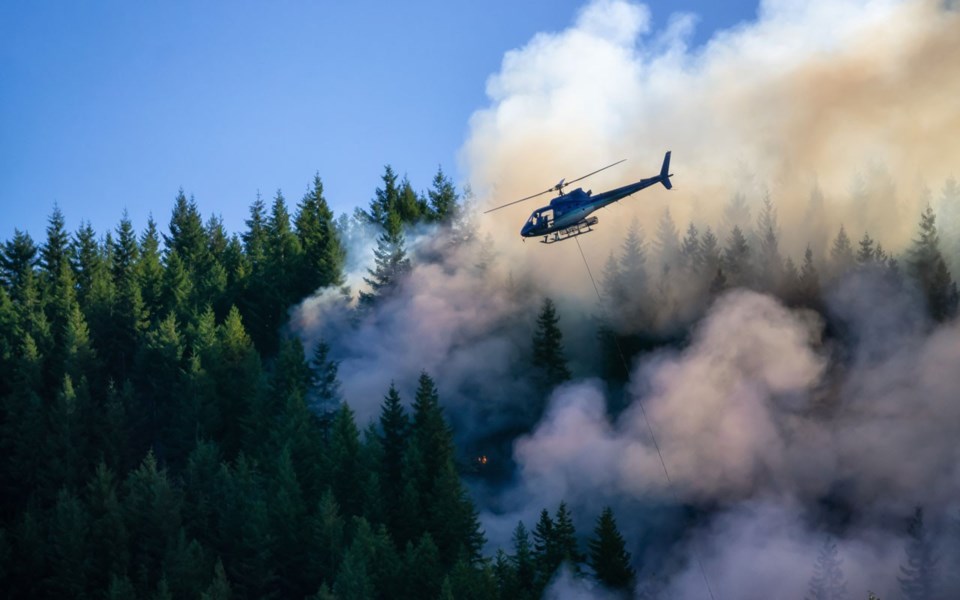 An odd thing happened today on the way from Dawson City to Whitehorse. The route is a bit of a milk run for the turbo-prop we were flying on, and so after leaving a cloudless, sweltering Dawson, we touched down only 30 minutes later in the tiny community of Mayo. By this point the air outside had become quite smoky from forest fires burning in the region, and when the plane's door opened to debark passengers, smoke immediately filled the fuselage, stinging eyes and throats, with several people covering their faces. Rather than having a similar negative reaction, however, I found myself responding in a curiously welcoming way.

"Ah, at last," said some bizarre neural knot in my brain. Starved as we've been in Whistler for anything resembling the sizzling summers of the past few years, and rife as those have also been with extended bouts of wildfire smoke, part of me had, in very short order, come to associate the smell of smoke with summer. Thus, a craving I'd been nursing for real summer was suddenly realized by real smoke.

This twisted but not uncommon kind of link is a perhaps unheralded example of something increasingly talked about by psychologists and other academics with regard to the environment—Shifting Baseline Syndrome (SBS).

SBS describes the continual lowering of people's acceptable thresholds for environmental conditions in the face of ongoing degradation at local, regional, and global scales. In other words, either in the absence of past information/experience with historical conditions, or abundant exposure to new conditions, people are prone to accept environmental shifts as a new normal. This psychological and sociological phenomenon is increasingly recognized as one of the fundamental obstacles to addressing a wide range of global environmental issues.

In proposing a conceptual framework to understand the causes, consequences, and implications of SBS, investigators have thus identified several self-reinforcing feedback loops that allow the consequences of SBS (accepted environmental degradation) to actually further and progressively accelerate it. These negative implications of SBS highlight an urgent need to prevent and hopefully reverse it through educational efforts. In other words, I should not be OK with a summer full of smoke.

The recent advent of these psycho-sociological phenomena is very real and very scary. In another recent conceptual paper, Deep Adaptation: A Map for Navigating Climate Tragedy, a sustainability researcher analyzes recent climate change studies and their implications for ecosystems, economies and societies to, as he puts it, "provide readers with the opportunity to reassess their lives in the face of inevitable near-term social collapse due to climate change." If you think that's a heavy statement, the paper also reviews reasons for the widespread existence of collapse-denial—particularly in the professions of sustainability research and practice where these things haven't been talked about until now. The author calls his meta-framing of the implications for research, organizational practice, personal development and public policy the "Deep Adaptation Agenda," and explains its key aspects of resilience, relinquishment and restorations, details of which we don't need to know to get his point: the disaster (i.e. impacts of climate change in the form of weather, ocean-level rise and acidification, ice melt, refugee movement, etc.) is upon us, and humanity needs to prepare itself for a climate tragedy that will happen not in some half-horizon future, but is occurring now. Certainly it's one of the first papers in the field of sustainability management to conclude that climate-induced societal collapse (think about that term) is now inevitable in the near term, and that researchers should start exploring the implications.

Beyond the blindness of SBS and the panic-button of Deep Adaptation, what's most obvious today is a generalized form of environmental anxiety, brought on by realization—à la Swedish climate crusader Greta Thunberg—that our leaders aren't taking any of this near seriously enough. There's a word to describe this more fleeting syndrome of human distress that essentially reflects a syndrome of ecosystem distress: solastalgia. As coined by the Australian environmental philosopher Glenn Albrecht in reference to the landscape modifications of prolonged drought and strip-mining, solastalgia speaks directly to impacts of both local and global environmental change on an individual's sense of place, and the negative effects that are exacerbated by feelings of powerlessness or lack of control over an unfolding environmental shift. As opposed to the more familiar term nostalgia—melancholia or homesickness experienced when separated from a cherished locale—solastalgia is the distress of environmental change on those still occupying their home environments.

Now that I have my SBS under control, the next time I smell smoke, I expect it to kick off a little solastalgia.