Last week, I wrote about UNESCO Global Geoparks' function to unite biodiversity and geodiversity as an all-encompassing cri de coeur in touristic regions, and how this could not only apply to our area, but also provide a high tide on which to float t
May 31, 2017 6:00 PM By: Leslie Anthony 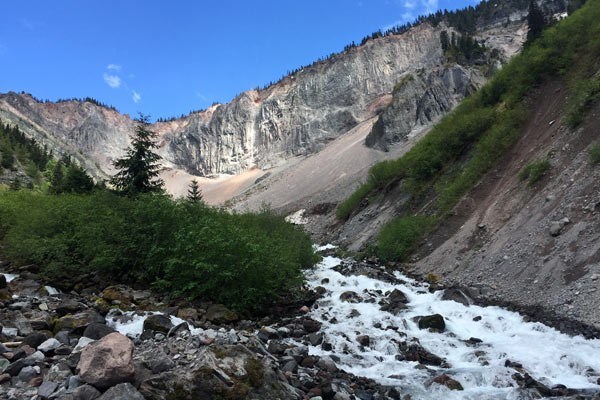 The Barrier , possible geopark attraction — more stories than you can shake a rock at. PHOTO by&nbsp;Leslie Anthony

Last week, I wrote about UNESCO Global Geoparks' function to unite biodiversity and geodiversity as an all-encompassing cri de coeur in touristic regions, and how this could not only apply to our area, but also provide a high tide on which to float the natural values that seem to rapidly be sinking from the region's tourism vision.

"The ability to link many things on the landscape with a community and its culture, heritage and economy is a big idea," says Dr. Godfrey Nowlan, Chair of the Canadian National Committee for Geoparks. "Areas that need social and economic development can benefit hugely. China has successfully used geoparks to develop its more remote areas and engage local cultural communities. But well-developed areas can also benefit from a cooperative, big-picture approach to tourism."

A geopark's marquee appeal is as a uniting force that doesn't require anyone already operating sustainably to really do anything different than they're already doing. Simply subscribing to the idea, and maybe adding some more interpretive mojo here or some signage there, gets you that UNESCO stamp on your brochure. With everyone thus branded comes potential for telling a bigger story, having a higher profile, greater visitations, and more customers concerned with the beauty, grandeur and specialness of the place — as well as their connection and responsibilities to it.

The Sea to Sky corridor is both well-developed and has a name perfectly suited as title and selling tool for a coastal area connected to the glacial environs of high mountains — peaks born of foreign terrenes slamming into the North American continent with resulting volcanism. When I raised the geopark idea with Steve Quane, a Quest University geologist whose research directly concerns this fire-and-ice geology, he thought it a worthy pursuit. After our conversation, I began itemizing the geodiverse attractions of the corridor, starting with Howe Sound itself.

North America's southernmost fjord was formed by an outlet glacier of a Pleistocene ice sheet whose terminal moraine stands underwater at Porteau Cove, and whose remnants include local icecaps. Without knowing it, thousands experience this each day from debris-flow-ridden Highway 99, a story unto itself. Ditto the Monmouth complex above the Squamish River, with its water-carved granite tubes, and the Stawamus Chief, North America's second largest granite dome, both already on the radar with hikers, climbers, canyoneers and Sea to Sky Gondola-goers. The Chief formed 20 kilometres below the Earth's crust, and the story of its rising up is geological ambrosia. Heading north are a series of uniquely storied waterfalls — Shannon, Brandywine, Nairn and Keyhole, each with its own tale. There's Diamond Head and Black Tusk, two very-different extinct volcanoes, the Spearhead Traverse, with all its glaciers and ice caves, the massive rockslides north of Wedge, and dynamic Mt. Currie — highest summit-to-valley drop on the South Coast — rising over the Pemberton Valley, floor of a former proglacial lake and now home to the Lillooet River and numerous hotsprings.

In such an impressive litany there are bound to be standouts. The Tantalus Range overlook, for instance, offers a veritable course in glaciology — bergschrunds, crevasse fields, remnant glaciers, moraines, hanging valleys, and nunataks (shark fins that once poked up from the ice sheet). The roadside columnar basalt south of Whistler spread unimpeded across the land to cool, as in Hawaii, but not so the sinuous formations winding beside them, representing lava that erupted beneath a glacier into meltwater channels.

Another sub-glacial lava flow, The Barrier, holds back Garibaldi Lake, whose subterranean outflow through cracks beneath the lava coalesces at The Barrier's base to beget Rubble Creek. Rock tumbles continuously from The Barrier's unstable face, a worrying reminder of the infamous 1855-56 landslides in which some 30,000,000 m3 of rock peeled off. Should The Barrier collapse, Garibaldi Lake's 1.29 billion m3 of water could wipe out Squamish — a good story with teachable moments in both geology and disaster prevention.

Finally there's Mount Meager, a volcanic massif 50 km upriver from Pemberton. In August 2010, heat-mediated collapse of Meager's Capricorn Glacier sent the largest slide in Canadian history — 48,500,000 m3 of debris — 10 km down the valley, registering 2.6 on the Richter Scale. In 2016, experts spotted fumaroles — openings venting poisonous hydrogen sulfide gas — on the volcano, possibly exposed by thinning glacial ice. Such on-going hazards make this one of the most active zones in the North American Cordillera — hazards that will increase with climate change.

What does this all mean to the visitor and/or resident? Well, the corridor's multifarious outdoor activities — skiing, sledding, paddling, climbing, hiking, biking, zip-lining, scuba diving, even wind-riding — all owe something to the area's unique geology, which is why pre-existing businesses already highlighting these can benefit further from a geopark designation — Whistler Blackcomb has even started down that road with interpretive geology about the two mountains on its hiking trails.

There's much I've overlooked here, but the critical issue facing a growing Whistler is getting visitors to care about the land, its flora and fauna, and the culture of its residents. For that, the Global Geopark model of big-picture sustainable tourism linking biodiversity to geodiversity is something we can build on.

PIQUE'N YER INTEREST: Guilt, discomfort, and progress
Jul 3, 2020 8:00 AM
Comments
We welcome your feedback and encourage you to share your thoughts. We ask that you be respectful of others and their points of view, refrain from personal attacks and stay on topic. To learn about our commenting policies and how we moderate, please read our Community Guidelines.