Summer games on the cheap 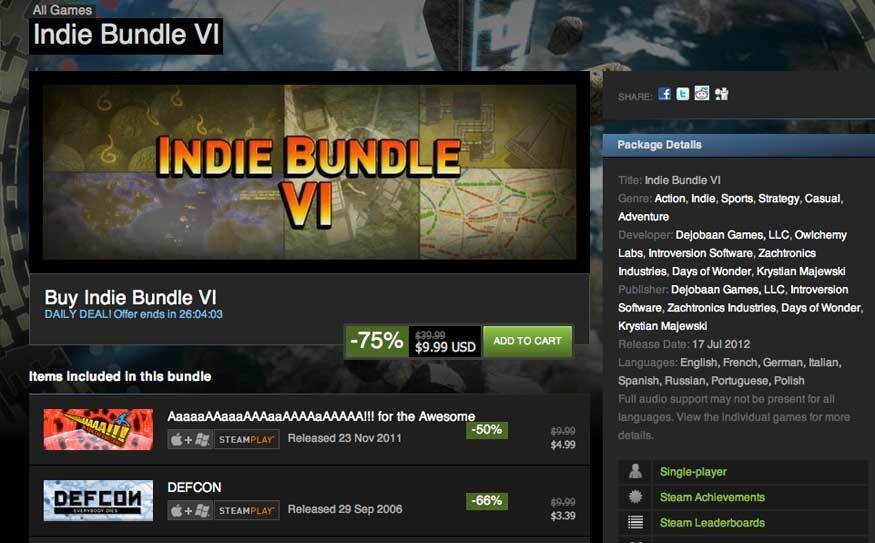 On Reddit.com, an online news and content aggregator site, I've subscribed to the /r/patientgamers feed which is more or less dedicated to all of us out there who can't or won't pay full price for new games, but are generally content to sit back and wait until the price comes down. Generally, patient gamers are well rewarded, even if you're behind the times and all the surprises are spoiled.

There are a few benefits to waiting. Online walkthroughs are available, Easter eggs and secrets that you might not have discovered on your own are uncovered, patches are released that fix and balance the game and sometimes there's DLC that makes it a richer experience — new missions and maps, playable characters, weapons and more.

The one exception I make is with games that focus on multiplayer, such as the latest Halo or Battlefield 3. The longer you wait, the fewer people you'll find online to play with/against, and those you do find are experts by the time you stumble in, n00b-style, to bolster their kill/death ratio.

When it comes to buying somewhat dated games, there are a lot of different places to go.

Steam (www.steampowered.com) — Valve's online game store is the golden standard for video game download sites, both for selection and the community features that are available. They're also pretty great at getting discounts on top tier games to their customers. Watch out for their Humble Indie Bundles, which arrive a few times a year, and let gamers pay what they want for games with the proceeds going to worthy charities.

The last bundle, The Humble Indie Bundle V, sold almost 600,000 bundles, raising over $5 million for various charities. And it's a stacked selection — games in the bundle include Superbrothers: Sword & Sorcery, LIMBO, Amnesia: The Dark Descent, Psychonauts, Bastion, Lone Survivor, Braid and Super Meat Boy for one low price. The new Indie Bundle VI is out now, and the clock is ticking...

As well as these titles, you can also go back in time and download the previous four Humble Indie Bundles, adding literally dozens of great games to your collections while doing something nice for the world.

Steam also announced its Steam Summer Sale last week, and it's a doozy with games like Portal 2 for $4.99 and pack deals where you can get dozens of top tier games for $50.

GOG (www.gog.com)— Good Old Games is Steam's poorer cousin, but has a huge following of gamers that like the DRM-free approach, global playability and exclusive deals you can't find anywhere else. They tend to bundle games that are in a series, and specialize in older games that have been remastered or stand the test of time. Want to play Myst again? They've got it.

Reddit GameDev Bundle (https://gamedevbundle.com) — This is a one-off bundle featuring six indie games that was offered through the Reddit game developer community. Check out the trailer, but it looks to be well worth the money for a variety of different game types.

All of these deals are for PC users, with just a few of them for Apple. All of the consoles also offer summer deals, like Xbox's Summer of Arcade and the PSN's Summer Sale 2012. All will let you download titles for huge discounts.

The valid question is why anybody would want to spend their precious, short summers playing video games, but my answer is that summer will end. It will get cold and wet again weeks or months before the snow starts to fall again. Think of summer games as an investment in your soon-to-be housebound future...

Time to change your passwords?

The hacking of 4.5 million Yahoo names and passwords last week is another in a long series of wake-up calls.

My own Hotmail account was hacked recently, and I really have nobody to blame but myself. I know well enough that you should change your passwords every six months or so, whether you use a service like LastPass or not to remember your passwords.

The best method I've found for changing passwords is to open a spreadsheet. In one column you list all the websites and networks you have passwords for, and in the columns going to the right you enter your current password. In the title cells put dates about six months apart so you can tell when you last reset your password and when you're overdue.

I've also become a fan of long passwords. Most security experts generally agree that longer passwords are harder to crack, even if you do use a mix of upper case, lower case, numbers and punctuation. Never use anything obvious like your name and birthday.

If you want a password that's difficult to crack, try a three-word combination. It's better when the words are unrelated — for example, the name of your last pet, middle school and your favourite flavour of ice cream, or three favourite one-word song titles — as long as you can remember the clues. All your passwords should also be different, so if your data is stolen from one platform you don't have to change a dozen different passwords.