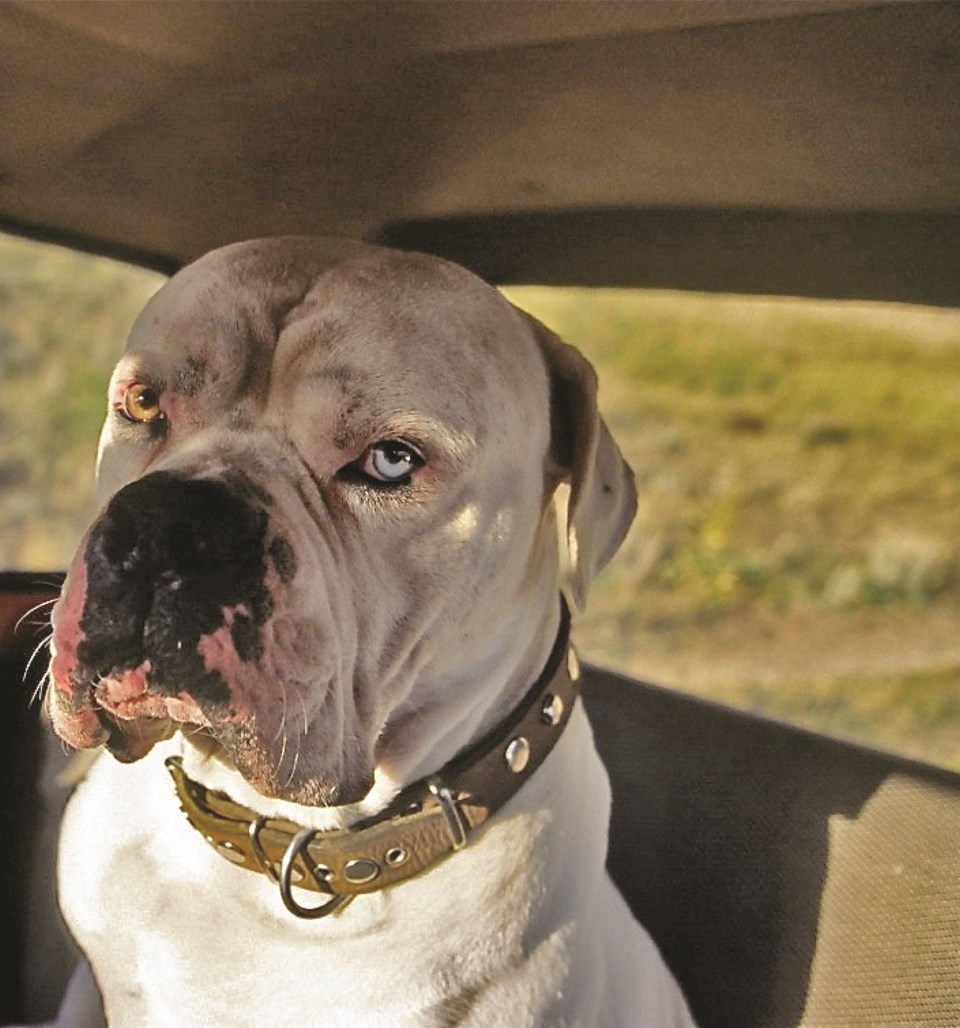 Aram No. 1’s American Bulldog, Jingo, who occupies exactly one quarter of a car. Photo by Leslie Anthony

In the Armenian capital of Yerevan to report on efforts to save the critically endangered Armenian viper, I’d joined my former doctoral supervisor Dr. Bob, Russian scientist Kolya, and our Armenian host Aram, in whose fetid apartment we camped between field expeditions.

After 10 days in-country, bleary-eyed breakfast again consisted of leftover food and vodka from the night before, and strong, Turkish-style coffee (Aram insisted it was Armenian-style and the Turks stole the idea) whose thick, sugary residue seemed potentially lethal. As usual, Bob downed three before he could function.

Aram worked at the Department of Protected Area Management in the Agency for Bioresources Management of the Ministry of Nature Protection (not joking), partnering on endangered species issues with World Wildlife Fund (WWF). Such was his official mantle; his vocation was herpetology—the study of reptiles and amphibians—which he’d pursued under that science’s Russian doyen, Ilya Darevsky.

Following in his footsteps, as if madness were a family business, son Levon was also a herpetologist, heading a national campaign to save the threatened, almost-cute Darevsky’s viper. This diminutive, cold-tolerant creature was found along Armenia’s border with Georgia on a single misty ridge representing no more than a dirty sock in the vast, geologic laundry pile of the Caucasus, an area of exceptional biodiversity where Europe and Central Asia collided.

Although Darevsky’s viper was an interesting—if not integral—part of this biological crossroads, none of the country’s snakes inspired more fascination than its flagship serpent: the Armenian viper.

Of the many animals named for the prolific 18th-century German zoologist Gustav Radde, Montevipera raddei was the most striking, with prominently horn-rimmed eyes and off-setting rows of rust-orange spots along its brown-black body. Such comeliness, unfortunately, saw the reptile targeted by an exploding international pet trade, contributing to a decline already turbocharged by habitat loss.

Although one imagined the ornate pattern to be conspicuous, we’d soon discover that in the orange-lichen-spattered rubble of its high-altitude home, the creature virtually disappeared.

Next day found us flashing south beneath 5,500-metre Mount Ararat, geography funneling us into the axial of Armenia’s reluctant intersection with Turkey, Iran, and Azerbaijan. As usual, we’d been hours late leaving. At first, the two 4WD vehicles we’d commandeered seemed perfect for Bob, Kolya, Aram, Levon, myself and our mountain of luggage. Aram would pilot his own, but we soon learned another driver—also named Aram—would command the second, an officious white jeep constellated in WWF livery.

Tall, red-faced, chain-smoking and garbed in a smart grey tracksuit, soft-spoken Aram No. 2 looked to be moonlighting from the Russian mafia. The assessment wasn’t far off; for years he’d piloted sealed trucks between Yerevan and Moscow, paid in cash, never knowing what contraband he transported. Creeping road piracy had ruined that bonanza, so now he’d resorted to chauffeuring indigent scientists. Given the deadly cargo we’d soon be schlepping, it was arguable which gig was more dangerous.

We also apparently needed a snake-wrangling field hand named Alek. He showed up in military fatigues with a jarhead haircut and a look that suggested he’d be happy to snap someone’s neck if requested. He turned out to be more of a gentle giant, however, as did Jingo, Aram No. 1’s bone-white, 65-kilo American Bulldog, who usurped the final seat and any chance of elbow room.

With a head the size of a watermelon, furrowed forehead, slobbering jowls and an enormous tight, pink scrotum bulging horizontally behind him, Jingo was the ugliest dog I’d ever seen. It didn’t stop there. His left eye was both skewed and bi-coloured, its top crescent the same soft brown as his right, while most of the orb glowed icy blue, a perfect bilateral schizophrenia: sad, doe-eyed puppy on the right; leering, satanic murderer on the left. Far outweighing his slight owner, Jingo inspired disbelief in all who glimpsed him; even gas-station attendants stared dumbfounded.

“Surreal,” offered Bob as we crept out of town, a rolling Dali painting.

Yerevan slid by like an unfinished basement, a stark, depressing, post-communist visage of disintegrating Soviet crap. The new regime was building atop the old master’s mess, creating pockets of corruption-fuelled opulence amidst the general mediocrity of quotidian construction, the interstices liberally piled with twisted iron, concrete, ageless garbage, and a choke of invasive plants.

A plague of rodents rustled through it all, and, as a result, snakes driven from their habitat by housing construction were following this food source into the city. One man even caught a deadly Levantine viper in his fourth-floor apartment. The Agency for Extreme Situations (I am not making this up…) had recorded a spike in emergency calls involving snakes. From 1995 to 1999, the annual average had been 30, with almost no cases in Yerevan. In 2004, however, 67 Armenians suffered snakebite and three died. According to the Department for Acute Intoxication (…I swear), Yerevan’s medical centre dealt with 23 of those, and had already seen 12 more by early 2005.

The convoy pulled into a petrol station. Both No. 1 and No. 2 rolled down their windows, respective cigarettes bobbing. An attendant interrupted his card game to slouch over, smoke curling from his hand, and bargain over gas. Money changed hands, the tanks filled amid constant argument. Cigarettes burned. Trapped in the back seat of a two-door, Bob and I contemplated the possibility of incineration.

“Surreal,” he said again, quite unnecessarily.