As national parks go, Yoho is more compact than most. Driving the TransCanada just west of Lake Louise, you've already left the park behind before you finish reading the "welcome" sign.
Nov 18, 2015 5:00 PM By: Leslie Anthony 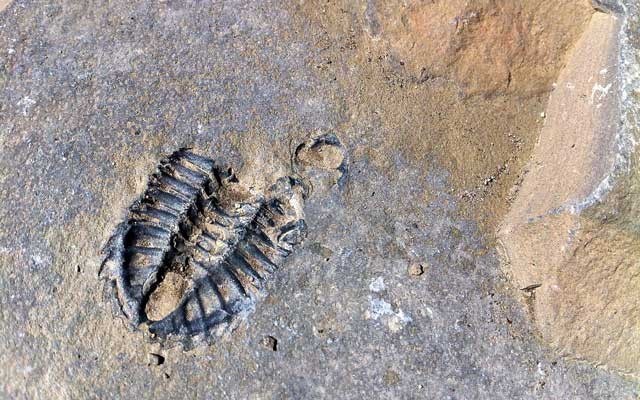 A MARVEL OF EVOLUTION Over a century after their discovery, the spectacular fossils of the Burgess Shale continue to reveal the deepest secrets of evolution. Photo by Leslie Anthony

As national parks go, Yoho is more compact than most. Driving the TransCanada just west of Lake Louise, you've already left the park behind before you finish reading the "welcome" sign. But if you commit to the turnoff, the jewels you'll find are among the most precious in all of Canada's mountain national parks system. Just ask Charles Doolittle Walcott, the American geologist who discovered the Burgess Shale.

Tucked at the base of a massive rock face just off the highway, Cathedral Mountain Lodge immediately feels like a hideaway — a cluster of classic log cabins in the forest by a lake. This is my starting point for a trip that's been on my bucket list ever since I read Stephen J. Gould's

Wonderful Life in 1981, which details the marvels revealed in the 505 million-year-old formation and the subsequent intrigue surrounding them.

The Burgess Shale is the single most important fossil deposit in the world. Containing almost all the life forms known from the so-called Cambrian Explosion — numerous new phyla and body plans that seemed to appear "suddenly" in the fossil record — the Burgess has been lionized in print, literature, film, and even music since its riches began to undergo serious study in the mid-1960s. The deposit's importance to both evolutionary theory and our understanding of all extant groups of animals remains unmatched in the annals of science. In recent years the Burgess has again commandeered both scientific and popular consciousness with stunning new interpretations of well-known fossils — some that speak to issues as central to evolution as sight and the perception of colour — as well as discoveries of more life forms new to science, many of which have yet to be described.

All of this was on my mind as I began the infamous 21-kilometre roundtrip hike to the "Walcott Quarry," where the Smithsonian Institute scientist and his family had excavated fossils for some 20 summers.

The ascent begins from the parking lot at Takawa Falls, and soon we're high enough to see the Day Glacier whose water feeds it. Above a series of switchbacks we break onto another bench and the angle of attack lessens as you make your way up to Yoho Lake, a shallow, shimmering water body with an adjacent historic campsite commemorated on a sign erected by the Alpine Club of Canada. Leaving Yoho Lake we head up a low-angled but shadowy valley where the cool, shadowed forest has small streams running through it. We make our way slowly up the flanks of Wapta Peak, with occasional breaks in the trees yielding glimpses of alpine majesty. Openings become more frequent, the views more spectacular. Crossing under a cliff face we spread out to watch for rockfall, then dive back into the trees before popping out into a large rockslide with a spectacular overlook of Emerald Lake and its eponymous lodge. It's a popular place for lunch — as the boldness of the many plump, golden ground squirrels here attest; shameless crumb-hounds, they beg for pieces of sandwich and cookie, running across your hiking boots as if these were just another rock, which they've done for generations as Walcott's early photos document. Afterward we pass through another patch of forest before encountering krumholtz — welcome mat to the alpine. The world opened up before us as we left the final trees behind, reaching for the sky while walking on what was once ocean bottom fifty fathoms deep.

Royal Ontario Museum (ROM) scientists have been working new Burgess quarries since the 1970s, making exciting new finds annually. A few summers ago, the ROM and Parks Canada launched a Burgess on-line exhibition as part of the Virtual Museum of Canada, an immersive journey using never-before-seen visuals and stunning animation, the website brings to life over a century of research and discovery.

The popularity of the Burgess Shale has also made it vulnerable: several years ago Parks officials chased a pair of Czech thieves, their pockets laden with purloined fossils, across the precipitous slopes. As a result we pass signs warning of the restricted area above the trail, before crossing the "discovery point" — a shale talus where Walcott famously got off his horse and noticed the impressions of strange creatures in rock that he'd eventually trace uphill to its origin — the exposure he named the Burgess Shale. Shortly thereafter we make the final upward turn to the quarry — switchbacks up an open face equivalent to climbing a 41-storey building. By now the anticipation of actually seeing the Walcott Quarry has erased any fatigue of ascent, and when we reach it — despite solar-powered security camera set up and a steel lock-box in which Parks Canada keeps interpretive material — I can only pause to reflect.

If you know anything of this place, then neither joy of accomplishment nor appreciation of the beauty of the surroundings can surmount the emotion of knowledge that washes over you. It's a less familiar and far-less tangible feeling reflected in the bricolage of broken shale slabs on which you stand — the ungraspable monster of deep time seen in an odd little riot of life that took place on a muddy ocean bottom some half-billion years ago. The range of organic bauplans not only includes most of the invertebrate phyla with which we're familiar, but also forms that represent opposite extremes: on the one hand there are those — some bizarre — that lost the evolutionary lottery and blinked out of existence forever, and on the other hand the humble beginnings of our own heritage — primitive chordates that would give rise to the vertebrates.

Over a century after their discovery, the spectacular fossils of the Burgess Shale continue to reveal the deepest secrets of evolution, their very existence a statement of why ignorance of their meaning is so dangerous to society. To stand in a place like the Walcott Quarry and truly understand its significance is to let go of all prejudice, imperialism and appetite for war, and to abandon notions that artificial constructs like "the economy" carry any primacy whatsoever, in favour of seeing all of humanity — which came onto the scene a mere geological blink of an eye ago — as sharing this razor-thin slice of geological time as a single species.

SCIENCE MATTERS: Reflections from an elder in isolation
Jul 4, 2020 8:00 AM
Comments
We welcome your feedback and encourage you to share your thoughts. We ask that you be respectful of others and their points of view, refrain from personal attacks and stay on topic. To learn about our commenting policies and how we moderate, please read our Community Guidelines.