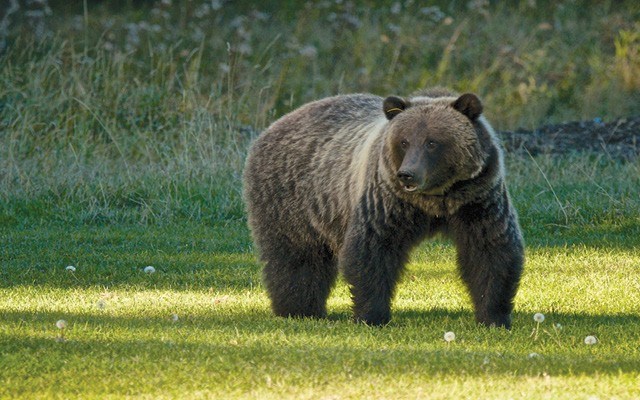 LOST TO US Bear 148, a collared six-year-old grizzly, was shot by a B.C. hunter after being relocated. Photo by Alex Taylor, Parks Canada.

When a trophy hunter shot and killed Banff National Park's iconic Bear 148 near McBride, British Columbia, on Sept. 24, it wasn't only the death of the beloved six-year-old female grizzly — or even the symbol of human-bear conflict she had become — that was grieved. Similarly, it wasn't the fact that the new B.C. NDP government's ban on trophy hunting would come into effect in two months that provided the most irony. Instead, a greater tragedy lay in the final blow to our ham-fisted initiatives to understand Bear 148, to get out of her way, and to save her from just such a fate. In her lonely demise — wandering confused through an unknown environment far from home — was also writ a final passing of the silly human hubris that imagined we could do so. In the end, all of our efforts were moot: with a probability so high that it isn't worth contemplating, the life of Bear 148 was prescribed to be cut prematurely short the moment she was born.

Young bears don't choose their home range, and when these are peopled areas with high anthropogenic impact such as Banff National Park and environs, the writing is on the wall. Bear 148 learned well from her mother, the equally iconic Bear 64, how to navigate this world of proscriptions. Surrounded by thousands of humans annually, Bear 148 did a merit-worthy job of avoiding them — and letting them know how much space she needed. Many hundreds had positive encounters with her, embracing her importance to the park and its landscape. But the nature of that relationship kept changing, the goalposts of our expectations moved by development and ever-increasing numbers of people. For a bear that was known through satellite-tracking data to almost always move within 100 metres of public areas, unencumbered utilization of the so-called wildlife corridors available to her became almost impossible. Add in a shift in behaviour that may have been linked to pregnancy and the dominoes began to fall.

In early summer, after several unusually close encounters with people, Bear 148 left Banff's protective borders for another part of her range in nearby Canmore, where berries — her primary food — were more plentiful. Here, encounters ramped up, culminating in an incident involving the bane of wildlife managers, off-leash dogs. Threatened with euthanasia by Alberta Fish & Wildlife, Bear 148 was eventually moved to adjacent Kootenay National Park, from where she beelined straight back to Canmore in less than 10 days. Proximity problems with humans continued and federal and provincial agencies again considered more drastic measures.

This past July, over 27,300 people signed a petition circulated by change.org demanding Bear 148 not be killed and be allowed to stay in the Canmore-Banff area. Although the petition was integral in keeping her alive, she was nevertheless translocated to Kakwa Wildland Provincial Park in Northern Alberta, 500 kilometres northwest of her home, becoming a poster child for what many see as a desperate need to change local wildlife policies.

As Bow Valley resident Bree Todd said of Bear 148's killing in a recent speech at the Three Sisters for Wildlife rally in Canmore: "Do we blame the hunter, or do we blame those that put her in range of the hunter's gun? She should have been able to live in this area for the rest of her days and been given the opportunity and respect to contribute to the survival of her species.

"She was robbed of that opportunity and those that are charged with these decisions need to know that we won't tolerate these policies any longer. Her death has become a catalyst for change and it would seem that responsibility to ensure that change rests with us... it is time to check our moral compasses and decide on what kind of future we want to leave for the next generation. What will our legacy be?

"This area is not only populated by humans and therefore cannot run on human desires alone. Whether this involves bike trails, hiking trails, dog parks, swimming holes, area closures, new developments etc., we all have a responsibility to take into consideration the wildlife and environment that drives our economy. For who will come here when there is nothing left?"

Whistler would do well to heed those same words.

In a feature that I wrote on Bear 148 in Canadian Geographic's April 2015 issue, "The Way of Bear 148" (a version also appeared in Pique as "A Bear on the Land," May 8, 2016), I ended the introduction with the following: "With bears as adept as humans at identifying and exploiting opportunities and benefits in our shared environment, where is the line between codependence and conservation?"

The article did not seek to answer that question, but to put it on the table for public consideration, much as it has been for professionals. But with Bear 148's passing comes a partial, telling answer: when no human approach or effort can prevent us from ultimately killing an animal with which we supposedly coexist, perhaps there is no line at all.