Cliff Chi's phone is ringing, which means cleaning his hands to grab it, then cleaning again when he finishes. It fits well with what he's otherwise doing — every few seconds cleaning this, wiping that, rinsing everything.
Nov 23, 2016 5:00 PM By: Leslie Anthony 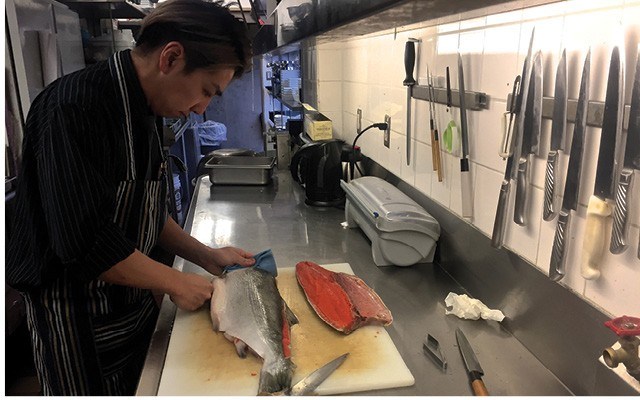 something's fishy Cliff Chi's preparation of salmon is performed with the skills of a surgeon. leslie anthony photo

Cliff Chi's phone is ringing, which means cleaning his hands to grab it, then cleaning again when he finishes. It fits well with what he's otherwise doing — every few seconds cleaning this, wiping that, rinsing everything. In fact, I've never observed such meticulous cleanliness. But that's the nature of the job when, like Cliff, you're cutting fish.

Cliff is head chef at Harajuku Izakaya, where he not only oversees menu creation, but personally cuts the fish that goes into sashimi, nigiri, maki and a range of lesser-known dishes. Today he's thawing and tackling a large wild sockeye — about three kilograms — which he does 10 to 12 times a week. Salmon is the only whole fish cut from scratch here, as the rest arrives prepared in chunks of flash-frozen deliciousness, a starting point for sushi: fish must remain at -20 C for a minimum of 72 hours to kill certain bacteria and parasites.

Sharing a kitchen prep area with adjacent Fuji Market's takeout counter, two girls work at stations on either side of us; one fills small cups with gari (pickled ginger, the yellow, natural stuff — if it's pink it has been coloured), while the other fashions spicy tuna rolls. With over 1,000 takeout sushi packs flying out Fuji's door each week, it's an industrious pace.

Cliff's first order of business is scaling; if you start cutting without this, scales leap off everywhere, fouling everything. Fast, impeccable technique and running water aid this mostly mechanical act, and soon we're ready for the art and science.

Before filleting, Cliff removes the neck area with pectoral fin attached, a substantial chunk traditionally grilled and served as kama (neck) in Japan. Now he employs a large set of tweezers to carefully pull bones. Next, membranes lining the belly cavity come off, along with another set of bones. He then slices off the belly flesh and attached fins, putting them aside for later grilling. It may seem like dissection, but it's food preparation with the skill of a surgeon.

Cliff packs his own personal knives: one stout but pointed, with the heft of a cleaver; another smaller sashimi knife; and a third longer "everything" blade. With the latter, he neatly slices into the back alongside the dorsal fin. Deftly bumping along the vertebrae, he cuts all the way to the tail, then switches to the short knife to fillet the flank off, repeating the process on the other side. The remaining middle bit — skeleton with bits of flesh that a cartoon cat might paw — is used to make soup or broth in Japan, but not at Izakaya. "Too many vegetarians in Whistler to use that broth for anything," notes Cliff.

Cliff started at Vancouver's Guu when he was 19, logging a decade with the restaurant group at five locations. Like anyone of such dedicated experience, the anecdotes flow. "In the Tokyo fish market, they stack fish right-side down," he offers over his shoulder, "so that side is used first because it's beaten up more and goes bad faster; Japanese also use fish starting from the belly up because fatty flesh doesn't last as long as the firmer lean stuff on the back."

None of this is a concern here in Canada, because we don't store fish on any particular side and it all gets used fast.

At this point, skin is separated from the fillet in one of two ways — peeled clean off or, as is common in Canada, with brown flesh attached to make barbecued salmon skin. Once skinned down to pure fillet, the flesh is chunked and tightly wrapped in plastic film. At sushi bars in Japan, it's always wrapped in a way that customers can see what's inside.

Normally, without a gaijin like me bothering him, Cliff takes 10 minutes to sort through a fish of this size and pack it all up.

Izakaya — written in three Kenji letters meaning "stay, house and alcohol" — best translates as "Japanese gastro pub," a place where people stop and hang out for a drink or some bites. The food is a bit different, and ever-inventive; as such, Cliff looks to expand the culture of Japanese dining in Whistler with Izakaya style and ideas. That means special menus — like one he built around Japanese pumpkin for Halloween — and new and interesting dishes. Canadians would likely find traditional Izakaya a little unsettling — e.g., raw squid marinated in squid guts, or hot cod testes — but Cliff's dishes are more suited to North American tastes.

"Are you hungry?" he asks, not waiting for an answer. He slices salmon belly diagonally, lays out thin-sliced onion on a long plate, and gathers the salmon into two piles, one at each end, sprinkling one with steak spice, the other a Cajun mix. After briefly blowtorching them, he adds wasabi (not the powder-derived, green-dyed horseradish we call wasabi, but a more subtle, difficult-to-grow Japanese herb) and a ponzu-like sauce containing onion, ginger and garlic. Both treatments are delicious.

"It doesn't have a name yet—how about blowtorched salmon belly?" he laughs.