THE OUTSIDER: Navigating the season of the Kraken 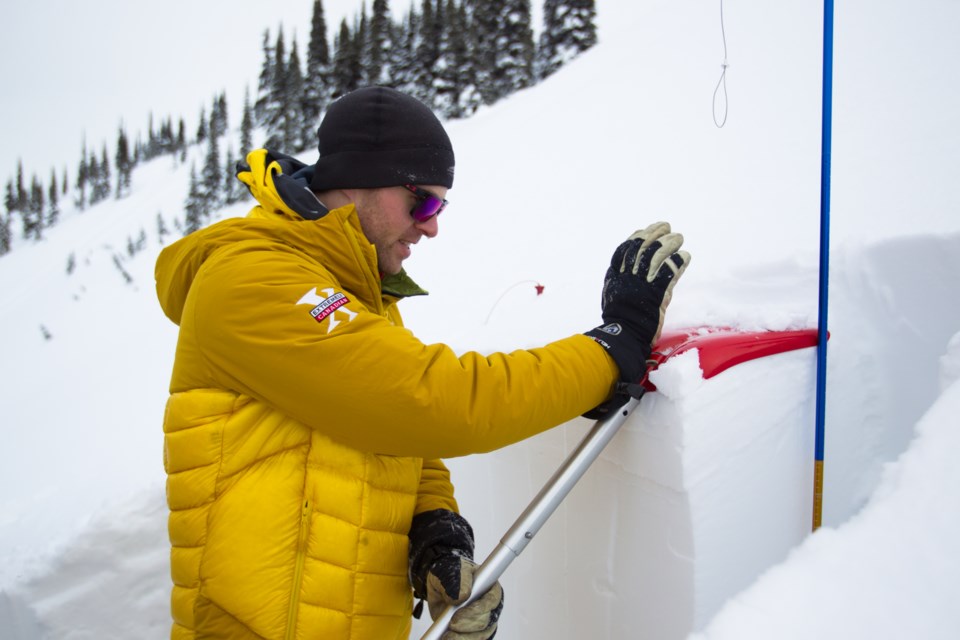 How do the professionals understand this inexact science? They live, breathe and respect the snowpack. Photo by Vince Shuley

There are few things as scary as feeling the mountain begin to move under your feet. That buoyant pushback from the powder against our skis—the sensation we all seek—suddenly morphs into a sliding maelstrom. You can’t turn, you can’t stand up and you sure as hell can’t stop. Sometimes you’ll get lucky that you’re skiing on the edge of the slide, allowing you a chance to escape onto an island of safety before it engulfs you. Most times not.

The “washing machine” analogy comes from surfing, when you get rolled around under water by a breaking wave. You don’t know which way is up or down, only that you can’t breathe. In moving snow, that aerated green room of the ocean is instead a ghostly shade of grey, one that gets darker as you descend. It’s eerily quiet save for the scratches of snow layers against one another.

There’s no greater wake up call in the mountains than triggering an avalanche. It rattles our nerves, questions our motives and shatters our confidence. Some years we’re blessed with our relatively calculable “right side up” snowpack on the South Coast of B.C.; light snow on top and increasingly denser snow as you go down deeper into the snowpack. While the behaviour of a “right side up” snowpack can be easier to predict, it can often lull us into a false sense of security and catch skiers off guard. Some years we get the dreaded “upside down” snowpack, where the lower density, lighter snow is buried under higher density, heavier snow on the surface. You learn pretty early in snow science that this “mattress on marbles” snowpack (credit to forecaster Joe Lammers for that analogy) is a recipe for avalanches.

Then there’s the kind of season we’re having now: A (mostly) right-side up snowpack but with a buried rain crust (thanks to an early season rain event in the alpine that was followed by consistently cold temperatures). This is what the forecasters refer to as a “deep persistent slab,” otherwise known as “persistent weak layer” (PWL). From the Avalanche Canada website: “Once formed, a deep persistent slab can last for an extended period, sometimes throughout the entire season. They can survive numerous avalanche cycles and are inherently difficult to forecast.

“A deep persistent slab problem often leads to a low-probability/high-consequence scenario, where the chances of triggering an avalanche are slim, but the destructive potential of any that are triggered is great. Managing this problem involves avoiding large avalanche paths and avoiding terrain where the problem exists.”

According to Avalanche Canada, right now in the Sea to Sky our deep persistent slabs are around 100 to 200 centimetres deep. This is what is causing a lot of the high-consequence avalanches lately.

Despite all the “be cautious” messaging from search and rescue groups, avalanche forecasters and ski guides, backcountry recreationists will continue to press their luck against this looming Kraken. While it may keep some folks happily cruising low-angle terrain, I’m not naive enough to think that this will stop people skiing aggressive lines and big slopes. But everyone needs to ski and tour as if the Kraken was just sighted off the port bough.

I know that can interfere with the good vibes of a bluebird day in the backcountry, but after one of my own close calls a number of years ago, I began to use a new mantra when planning ski touring days: Complacency has no place in the backcountry. Like glancing over green and yellow colours on the Avalanche Canada bulletin and assuming that a “Moderate” rating means it’s good to go. Like assessing the slope’s potential to slide purely on recent storm snow rather than taking the deep persistent slab into account. Like seeing tracks on the face and assuming that if it was going to slide, it would have slid when the first group skied it.

The problem with inexact sciences like snowpacks is that you never really know how close to the line you are treading. This fuels egos and other human-factor heuristics that get parties of skiers and snowmobilers into trouble. I’ll let Powder Mountain Catskiing lead guide Don Schwartz close out this sentiment with an excerpt from his Facebook post last week:

“No this layer won’t go away any time soon.

Rain to the peak for two days may fix it.

No it won’t be active every day.

It may sit dormant for a week or more.

Ski in the wrong spot and you’ll find it.

If you think you’re smarter than it, it will kill you.

This is a layer to be respected, avoided, worked around and just plain left alone.  Give it a WIDE margin.

Please treat it with the respect it deserves, and we can all live to ski another day.

Ski with a guide.

Vince Shuley fears the Kraken. For questions, comments or suggestions for The Outsider email vince.shuley@gmail.com or Instagram @whis_vince.