The path not taken — life, death and finding one's way in the world 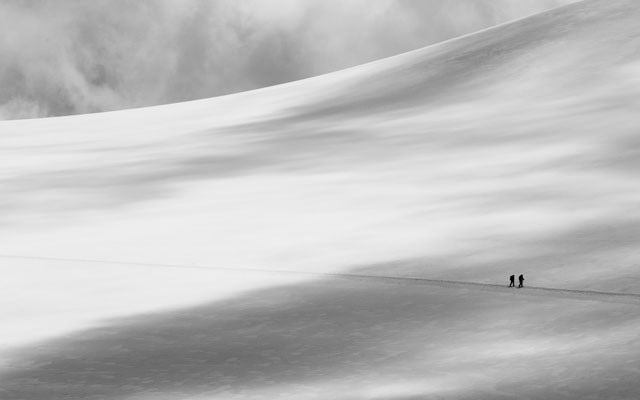 Past the muck, the mess we've made,

See how clear it is?"

Death is a funny thing. It's the one sure fact of life: no one gets out of here alive. And yet, for most of us, the thought of "death" also triggers an intense phobia. We just don't want to hear about it. Death happens to other people. Not us. It happens in the movies and on the TV and in novels... to grandparents and other kin maybe, faraway in distant places... but never in our own lives.

Have you noticed? Mention the word "death," and suddenly people tense up. Smiles are wiped off faces. Grins disappear. This is a S-E-R-I-O-U-S subject. And most folk quickly steer the conversation in another direction.

Particularly in a place like Whistler. After all, the resort's success is predicated on re-creation. Re-birth, you know, getting back in touch with simple things like sliding on snow or socializing with buddies or... it's a party place, baby. Not a funeral home.

Life rules here. Living large is what this town was built on. Death has no place in Whistler. Too downer a subject; c'mon, let the maudlin stuff go... think positive.

And yet... Death does happen here. Maybe not in the resort of Whistler. No, nothing bad (or real) ever happens there. But in the community of Whistler? Ah, that's a whole other story.

I lost three friends last month. All were women. And all had a long and involved relationship with this place. And now they're gone. Pfftt... just like that. Three strong, creative, vibrant 21st century gals who gave more to life than they ever took.

What really makes me sad though, is that two of these exceptional women chose to take their own lives. That's what really hurts.

I know. I know. You're not supposed to talk about the "s" word in polite society. But then, maybe conventional wisdom is wrong in this case. Maybe talking honestly about depression and suicide — bringing this last-of-the-taboo subjects out in the open — is actually good for us. I mean, maybe that's what we need to do to exorcize its hold on our imagination. No? At the very least, it might help other sufferers know they're not alone. And if just for that, it's worth ruffling a few social feathers.

I was reminded of this recently during a mountain-top conversation I had with a group of younger friends. The day was beautiful — cold but sunny... perfect for mid-April — and we'd enjoyed one of those sweet spring powder days that Whistler Mountain is so famous for. Each run had been better than the one before. Soft and deep and friendly and... yes, just a wee bit nostalgic.

It was spring skiing the way it should be... the way we always remember it in our dreams. And when our group decided to stop in the alpine to extend our mountain day a little, Ol' Sol decided to bless us with a surprisingly warm late-afternoon glow. And I couldn't help myself. I had to seize the moment and offer a toast to one of my recently fallen friends. And somehow her story came out. And the subject of suicide raised its ugly head. And I watched, fascinated, as these young skiers and riders wrestled with the strange idea of willingly bringing your life to an end.

The concept was totally foreign to them. "It seems kind of surreal," admitted one woman. "I mean, what we do around here is all about staying alive. You know?" And then there was a long pause. "I can't even imagine what it would feel like to want to end your own life. I don't think I know anybody who would ever consider such a thing..."

Did I dare? How would they take it? Would it freak them out? It was a hard decision to take...  even among friends. Still, I decided it was worth the risk.

"You'd be surprised," I said. They waited expectantly...  clearly, they still hadn't figured it out. Damn the torpedoes, I thought. And I launched into my little tale. "There once lived a very happy Snoweater," I began. "And though it goes without saying that Snoweaters are mostly happy people, this particular one had more reasons than most to be satisfied with his lot in life. He was a bard by trade, you see, and travelled the world collecting great tales of derring-do and adventure. Meanwhile, he'd also managed to charm one of the tribe's most beautiful princesses and they'd set up a home together and started a family. He felt blessed by the gods... nothing, it seemed, was out of his reach."

I took a deep breath. The hard part was coming. "The years passed. The happy Snoweater's family grew... and continued to sup from the sweet nectar of life. It felt like everything the man touched, or his princess touched, or his children touched, turned to gold. Success came so easily in those years... for all of them. And slowly but surely, the happy Snoweater began to let his guard down."

Ah, the crux. "He knew he shouldn't,"I went on. "He'd been warned by an ancient seer when he was still a young man. 'Beware,' had said the seer. 'For there are divine forces aligned against you. And when you least expect it...' But the Snoweater was strong and bold in those days, and too-easily dismissive of old men's prophesies. And so he continued to live life large, a little smug about his good fortune, and mostly unaware of the sword suspended over his family's happiness."

Until it dropped and changed his life forever. "One spring day," I recounted, "after a long voyage abroad, our happy Snoweater came home to discover that his princess had been abducted and carried to the underworld while he was away. Gone? Never to return? How could this be, he thought. His princess was his life. His love. The mother of his children. How could she be stolen away like that? What had he done to deserve such a fate?

"But no matter how much he railed and screamed and hurled questions at the gods, they refused to respond. And he grew despondent and miserable and unable to find enjoyment in everyday things. Finally he was visited in a dream by the same old seer who'd first warned him those many years ago. 'You chose not to listen to me back then,' he said sadly. 'You fell victim to your own hubris.' And then he sighed. 'I told you there were forces aligned against you. And yet you persisted in flaunting your good fortune.' The old man shrugged. 'So now it's your turn to mourn. From this day forth, everything you touch will turn to dust, anything you attempt will lead to disappointment. Failure will be your constant companion. Despair will become your best pal.' The old man paused. Sighed again. 'I told you once what could happen,' he finally said. 'Shoudda listened to me then.' And then he was gone."

Nobody had said a world since the beginning of my tale. Now they waited — anxiously — for the punchline. They wanted a resolution. Wanted to know how our hero finally managed to free himself from the Immortals' curse. But what I recounted wasn't what they'd expected to hear.

"And so," I pushed on, "our once-happy Snoweater began to feel the sting of constant sorrow. After his wife was abducted his health took a beating, then his means of livelihood evaporated and finally... well, let's just say he ended up with a pretty thin ledger. But the hardest thing to bear — the one change that really hurt — was that life had ceased being exciting, funny, attractive. It was like drinking wine and not getting a buzz anymore. Kissing a woman and not getting an... well, you get my point."

I was coming to the end of my story. Would they finally understand? "And it came to pass," I went on, "that our hero found himself in a dark and lonely place. Pain was his only reality — unbearable, agonizing, life-crushing. Suicide seemed almost benign in comparison. A fitting solution even: 'OK I get it. I screwed up. Time to move on.'

"But our Snoweater had friends. Old friends and young friends, sure friends and true friends. He had family too... people who'd known him all his life. And they refused to let him go. 'Hang on,' they said. "You'll get through this. We're there for you.' And they were... No matter how hard he tried to push them away."

I took a deep breath. Looked around. "And so came the day when our struggling Snoweater decided to make a pact with himself," I continued. "Nothing complicated, you know, just very practical; a contest if you will. You see, every morning when he wakes up now — no matter how black his mood, or how much pain he's in — our man challenges himself with one simple exhortation: to live just one more day. That's all. No thought of the future. No angst about tomorrow. JUST. LIVE. ONE. MORE. DAY."

I stopped talking. Let a few beats go by. "Now do you get it?" I asked my young friends. "Now do you understand the point of my story? It can happen to any of us..."