The powder that hurts

Anyone skiing Blackcomb Sunday or Monday would have been treated, as was I, to the ping-ping-pinging on their jackets (or T-shirts) of one of the most intriguing of meteorological phenomena — graupel.
Apr 27, 2016 6:00 PM By: Leslie Anthony 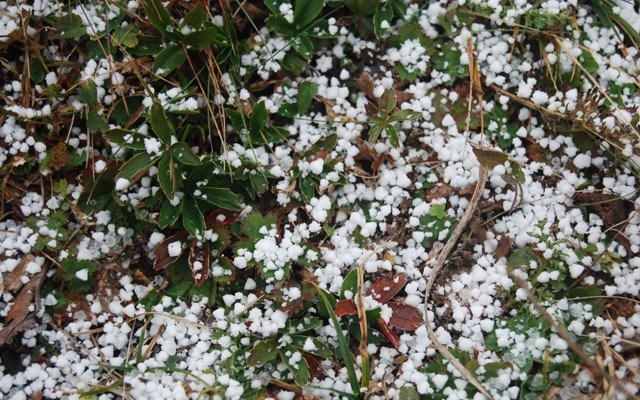 All Hail Graupel can make for suprisingly good skiing. PHOTO courtesy of freebigpictures.com

Anyone skiing Blackcomb Sunday or Monday would have been treated, as was I, to the ping-ping-pinging on their jackets (or T-shirts) of one of the most intriguing of meteorological phenomena — graupel.

Graupel is a rarified form of frozen precipitation that conjures just enough paradox to suggest an intriguing microcosm of ski-world irony. Once upon a time I curated a column for Powder magazine that was titled "Graupel" for this very reason. Rob Story, my fellow editor-at-large at the time and co-chair for those musings, pretty much knocked it out of the park when he called graupel "the powder that hurts." I don't think anyone has ever come up with anything better.

So just what is this stuff? Even a cursory consideration leads quickly to a hierarchy of technical definitions befitting a Jeopardy category: graupel is snowflakes that become tiny (2–5 mm) rounded pellets due to riming; rime, as many of you know, is a deposit of ice formed when supercooled water droplets freeze on contact with an object (all structures and exposed rocks on the summits of both Whistler and Blackcomb mountains are lousy with the stuff all winter); supercooling is the condition when water remains in the liquid state even though its temperature is below its freezing point. Yes, I'll take graupel for 500.

Although the Inuit have frequently been referenced as employing more than 100 different words for snow, it turns out that their root words for frozen precipitation are no more numerous than in English. But I'm still willing to bet graupel has no equivalent in their language. That's because although graupel can be found in the Oxford dictionary, its etymology shows an origin in late 19th century German — a back-formation from graupeln — to "hail with soft hailstones" — itself derived from graupe, which means "cereal grain." The Germans have a way with words.

Graupel is indeed a kind of hail in that it forms around a pre-existing form of precipitation, but being as light as cereal grain it doesn't have the same gravel-from-a-slingshot kind of impact. NASA once postponed a shuttle launch because the spacecraft was damaged by hail. Graupel wouldn't do that. It's kinder and gentler — more like friendly little pieces of packing Styrofoam. But, as Mr. Story implied, that doesn't mean it's completely benign.

On occasion graupel falls straight down, but usually, since it's most common in maritime climates or the convection tumblers of changing air masses (hello Whistler in spring!), it falls horizontally on a stiff wind — the kind of cold, wet blow that hosts massive colonies of homeless, supercooled water droplets looking for something to do — like bounce emphatically off your face and clothing. So most of the time, being graupelled (I'm guessing this is a legitimate past participle of the verb; and I'm sure anyone who's ever been graupelled would agree) feels like banging your face repeatedly with the bristle-side of a brush. It can be really quite invigorating. If you didn't know you were skiing in a storm, graupel reminds you.

Graupel, in fact, reflects everything that's good about skiing — surprise, sensation, texture, raw nature — and also everything that's weird and mysterious. When graupel falls, skiers inevitably look at the odd accumulation, and, if they're not Scottish or a trained meteorologist, screw up their face and ask, "What's this stuff?" Me, I always greet the advent of these little pellets with an enthusiastic "All right — graupel!" I dig the hollow sandblast ping they make when they bounce off your Gore-Tex; kind of like the distant, muffled sound of popping corn. I'll take graupel over ice pellets and sleet any day.

Like skiers, graupel particles are rugged individualists; they don't ever bother sticking together. Riding up a chairlift you can even count them as they roll down your jacket, piling up in crooked sleeves, creases, and, mostly, your lap. The conditions that create graupel are typically short-lived, so there usually isn't much of it. Once in a while, however, it gets unexpectedly deep. And since graupel's light (there's a lot of air trapped in rime), it can be pretty sweet. After a strange three-day storm in the mountains of Lebanon once, I actually skied 20 centimetres of graupel meringue that, though dense because the pellets have no loft, was every bit as forgiving as powder and twice as speedy. Sure I almost got hit by lightning trying to ski it, but it wasn't the graupel's fault.

But whether underfoot or in your face, a good graupel session reminds you that skiing is all about the trade-offs between pain and pleasure. I'm not thinking about bad pain — like discovering through direct experience why you should be wearing a helmet — but the good pain. The kind that tells you you're having a good time. You know the drill — leg-burn, out of breath, ice-cream headaches, frozen toes.