The siren call of spring (skiing)

Unlike many I know, I've never been happy turning my back on winter. I love an extended season. It's one of several reasons I moved here in the first place.
Apr 25, 2018 6:00 PM By: Leslie Anthony 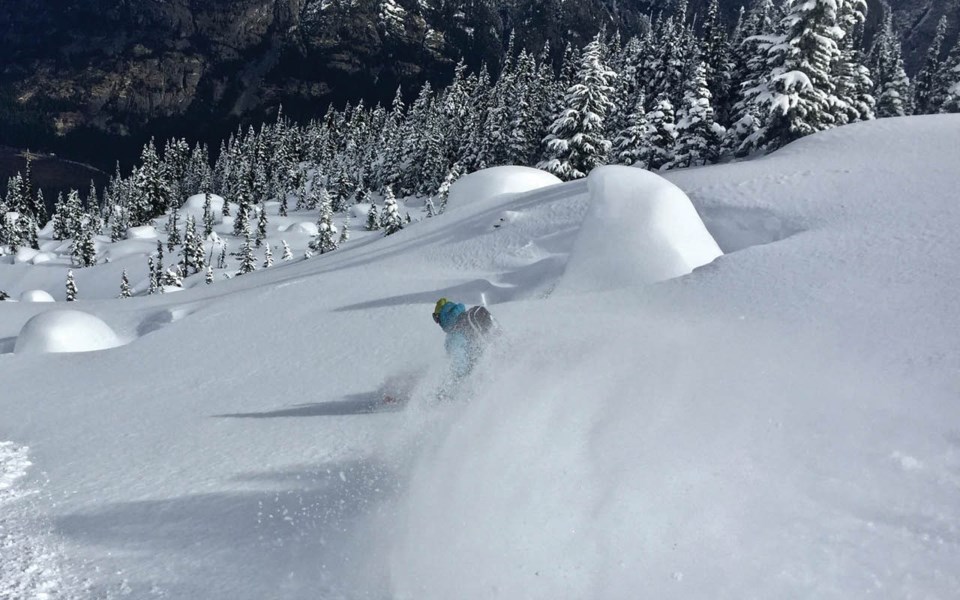 Snow escapes In the Coast Range, spring skiing can still be ruled by winter. PHOTO by Leslie Anthony

Unlike many I know, I've never been happy turning my back on winter. I love an extended season. It's one of several reasons I moved here in the first place. I have never thought about—let alone felt—the sentiment expressed by so many of my peers: "It was a great season, but I'm ready for a little sun/heat/summer/beach action." Really? But it's still snowing—what's wrong with you?

Like everyone, of course I appreciate summer and enjoy it while it's here. But it's simply not in my makeup to look forward to it. This likely goes back to my early years as a dedicated skier living in Southern Ontario: when summer was over we wanted it to be winter—now. Autumn and spring were for chumps—and plants that at least used these awkward periods for dormancy, regeneration, reproduction or whatever while we patiently waited for the sleet and rain to end, which, occasionally, it never did. In a place like Southern Ontario, seasonal interstices didn't offer the option we have here—to retreat vertically back to snow. Which is why early and late-season snow missions became my norm, the eternal search for snow spanning the continent—and eventually beyond.

In high school and university, the too-often late winters and even more often early springs meant road-tripping. In the fall, we'd hit ski areas in the snowbelt north of Toronto that weren't open yet, making turns on both manmade and natural snow that gathered there and nowhere else. We'd seek out heights of land in the vast sweep of corn fields between Lake Huron and Lake Erie where we might find traces of snow over pine needles that was deep enough to ski on. After Christmas and spring exams, we'd think nothing of driving 30 to 40 hours straight to catch Utah's or Whistler's early or late seasons, respectively. In May, we'd head east to closed Quebec ski areas like Grey Rocks that may not have had running lifts but had metres of snow left to ski; those were the days when our drive to slide led us to do things skiers would now find unconscionable (or at least silly), such as spending hours climbing simply to ski bumps.

Once we learned about backcountry, our road-trip repertoire included the lengthier drive to New Hampshire's Mt. Washington, where we'd climb 10 kilometres with refrigerator-sized packs to the base of Tuckerman Ravine, a glacial cirque that babysat huge amounts of snow into summer. Here, we'd camp in three-sided wooden shelters buried under snow in good years, and in bad exposed to all the elements, then make an additional several-kilometre trek each morning to the floor of the ravine, from where we'd spend hours climbing and skiing Tuckerman's infamous 50-degree headwall. Sometimes we'd have sun and awesome corn on which to learn how to ski the steeps; other times storms rolled in and dropped half a metre of snow driven by hellacious wind (brushed by the Jet Stream, Mt. Washington still holds the record for the highest non-tornado/cyclone wind speed recorded on earth—372 km/h, freezing us in our sleeping bags and burying the ski equipment we'd stashed at the headwall's base.

I could never get enough of spring-ski adventures and, as I hitched from one university degree to the next, took summers off between each to spend skiing Southern Hemisphere destinations like Chile and New Zealand. On those sojourns I didn't miss summer a bit. Perhaps because, like B.C., moving up or down the mountain delivered you in and out of full-blown winter. Which brings me back to the Whistler spring-but-still-winter vibe.

I love skiing the Coast Range in spring when most people in Vancouver have forgotten about winter for another year. Working on a story in Bella Coola in early April we were besieged by winter-like Pacific storms and large amounts of snow, and I cherished every minute of it (expect when a storm cancelled our flight home).

I was energized to return to a Whistler Blackcomb that was firing like mid-winter and has kept it up late into the month. Powder days like April 18 (right?) and April 21 (sleeper!) with few humans are amazing gifts from Ullr, and a reward for your patience in living here. If you don't take advantage—or don't know 'cause you didn't go—well, to each their own.

While all the human signposts of winter-is-over have come and gone in our little valley—the WSSF, Ace's Hot Dog Party, Coloradans—I'm still holding out for more meteorological mayhem. Bring on the late spring powder days on Blackcomb, ski-touring on Whistler, and glacier-skiing this summer. Yeah, I've looked at the forecast (you're probably reading this at Rainbow Beach), I've caught my first Pemberton snakes of the year (even a glimmer of heat will bring them out), and I accept the theoretical descent of summer. But what I don't accept is winter being totally over, which is why, unlike Southern Ontario, B.C. works for me: somewhere, somehow, you can always find snow.