As a pandemic- shuttered global gentry finds time and motivation to pursue all manner of guerilla baking, and weighing the popularity of specific items by sheer volume of Instagram posts, it appears that sourdough is in.
Apr 11, 2020 1:00 AM By: Leslie Anthony 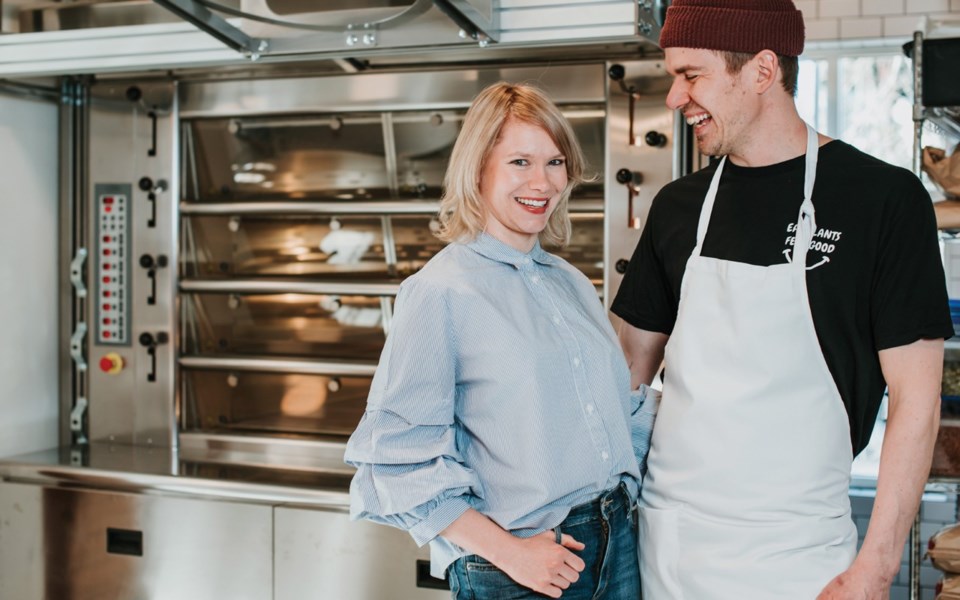 sourdough start-up Sourdough has become de rigueur during the downtime of the COVID-19 pandemic, which came as no surprise to BReD's Ed and Natasha Tatton. photo by darby magill

As a pandemic-shuttered global gentry finds time and motivation to pursue all manner of guerilla baking, and weighing the popularity of specific items by sheer volume of Instagram posts, it appears that sourdough is in.

This is no surprise to Whistlerites Ed and Natasha Tatton, owner-operators of BReD, a plant-based bakery and coffee shop built on the esoteric bread style. For the 30-something Brits who met in their late teens and travelled the world before landing here to carve out a professional life, sourdough isn't just in—it's life.

Like most consuming passions, this one had an on-ramp. With a strong interest in food and fine dining from an early age, Ed was working as sous chef at Whistler's Alta Bistro. "We made everything from scratch but the bread," he recalls when I chat with the couple by phone. "I asked if we could get a bread program going since I had some experience in it. Once we started, I'd sometimes show up at yoga with a loaf of sourdough, the smell would permeate the studio, and people would ask where they could get some. So, in February 2016, I started taking orders through Facebook and using Alta Bistro's kitchen when it was free."

Starting with 30 loaves a go, demand soon skyrocketed. "I'd just proposed to Natasha and needed money for our wedding fund, so I jumped up to 50, 100, 150 loaves. With just two ovens and a tiny mixer that could only do 15 loaves at a time, it got crazy," he recalls.

Natasha chimes in. "Ed originally thought sourdough had a manly appeal—like craft beer," she chuckles. "But the target market was young moms, who loved his English charm and good looks."

Production eventually outgrew Alta Bistro, which needed its kitchen—and sous chef. Ed nevertheless nurtures fond memories of these humble beginnings. "It was good market research, too—what styles of sourdough did people like, how much would they pay?"

These were important questions, because a business seed soon sprouted.

With both his brothers and father being business owners, Ed had likewise contemplated his own restaurant. He and Natasha saw demand in Whistler for both quality sourdough and plant-based food choices, but opening a shop remained a big decision. They sold their house in the U.K., added their savings to the pot, and secured financing. Then the fun began.

A perfectionist by nature, Ed now had latitude to research and geek out on proper equipment, which the pair share a laugh over. "It took me two hours to decide on a hand-towel dispenser," recalls Ed. "Tash is telling me—It's just a dispenser and I'm like, No—it's not. You know how little girls dream about their wedding details? I had that kind of vision."

The issues weren't always small, adds Natasha. "We had an expensive oven built to order in Italy and were terrified we wouldn't be able to get it through the door, or that it was too heavy, so there were engineering concerns."

Eighteen months after deciding, BReD opened on March 22, 2019. The reception was unprecedented. "People are cautious about new businesses, looking to see what you bring to the table, but we were busy," says Natasha. On top of several different bread types, Ed's sourdough cinnamon rolls were an instant hit, most mornings seeing line-ups out the door onto Franz's Trail, the commercial heart of Creekside.

The appeal was obvious: exceptionally high-quality baking and barista work, vegan friendliness, and an open-concept kitchen, a window into the mystique of sourdough—a start-to-finish 32 hours of labour, physics, chemistry, and biology seen in a three-ingredient mix of flour, water, and salt, and the combined leavening and fermentation abilities of yeast and bacteria (acids produced by Lactobacillus sanfranciscensis give sourdough its signature flavour). As Ed puts it: "Humans have been making bread for over 6,000 years. It got a bad rap recently, but our bodies digest fermented grains much better." So...sourdough.

With huge community support and record-breaking sales this winter, March 2020 was going to be spectacular—a fitting way to celebrate a first-year anniversary. Then, like most Whistler businesses, it shut. "One minute we're hiring new staff, the next we're laying everyone off and operating an online shop," says Natasha.

In fact, BReD was an instant model of pandemic-friendly business: orders are placed on edsbred.com before 8 a.m. Friday; you pay online, receive an email confirmation, then choose a pick-up time between 9 a.m. and 7 p.m. on Saturday. Each customer has a five-minute window with no one else in the shop in which to pick up their packed order from a table.

With Ed working to capacity on his own, they're selling out every week. Occasional specialty items keep it interesting for customers. Natasha's favourite? "At the moment, hot-cross buns—because they're so nostalgic of childhood. But normally it's a pecan cinnamon bun with house-made coconut whipped cream and an oat-milk latte." Ed's tastes are simpler; he still best appreciates a slice of sesame or poppyseed sourdough—with peanut butter, avocado, or extra-virgin olive oil.

Some of the changes (e.g., online shop) will linger after the COVID crisis, but the love of making bread will never diminish for Ed. "A hundred things can go wrong making sourdough, so when they don't, and I make some epic bread, I'm pretty happy."