The traditions of the sea and the EU

Late last year, the governments of the European Union, having refused to share the cost of a very successful operation called Mare Nostrum in which the Italian Navy rescued tens of thousands of refugees from sinking boats in the Mediterranean, replac
Jun 3, 2015 6:00 PM By: Gwynne Dyer 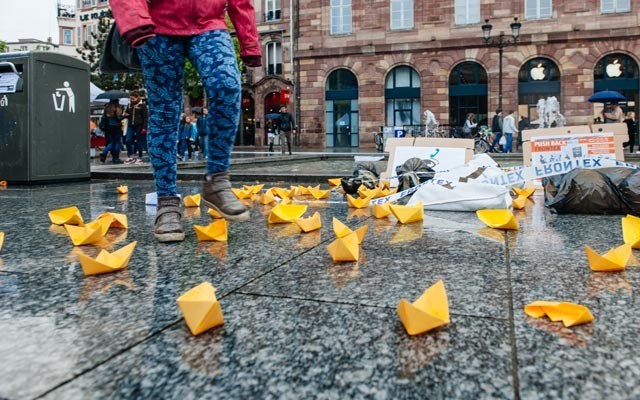 Yellow paper boats at protest against immigration policy and border management which asks for commitment in the wake of migrants boat disasters in France this April. Photo by Hadrian / <a href="http://Shutterstock.com">Shutterstock.com</a>

Late last year, the governments of the European Union, having refused to share the cost of a very successful operation called Mare Nostrum in which the Italian Navy rescued tens of thousands of refugees from sinking boats in the Mediterranean, replaced it with a much smaller operation called Operation Triton. Its purpose (though they didn't put it exactly that way) was NOT to rescue the refugees, because then they ended up in the European Union.

Triton was a "coastguard" operation, with a third of the budget of Mare Nostrum and orders only to patrol Italian and Maltese coastal waters. They could save any boatloads of refugees that made it that far, but they were not to do "search and rescue" operations off the Libyan coast, which is where most of the overloaded boats actually founder.

Inevitably, the death toll from drownings in the first five months of this year was thirty times higher than in the same period last year: at least 1,750 human beings. The losses were so shocking that an emergency EU meeting in late April boosted Triton's budget back up to the level of Mare Nostrum — but they didn't change its "mission." It was still only supposed to operate in EU coastal waters.

But then something odd happened. Last weekend, ships from the Italian, British, German and Irish navies rescued more than 4,000 people in two days — the vast majority of them just off the Libyan coast. The EU has not condemned the operation, but it wasn't really the EU's plan. What drove it was the sheer reluctance of the navies to stand by and let people drown.

The European politicians face a huge demand from their electorates to stop the seemingly endless flow of "migrants" (the preferred term for refugees, since it elicits less sympathy) across the Mediterranean — 170,000 people made it across last year, and it could be double that number this year unless lots and lots of them drown. But the voters (or most of them) don't want to hear about that, and most of the politicians are not very brave.

So the politicians did what the voters wanted. At some level they must have understood the consequences of stopping the search-and-rescue operation, but they found ways of lying to themselves. First off, they said that all these life-saving operations were just encouraging more people to risk the crossing. Stop saving them, and they won't come.

Ridiculous: these are desperate people who have already faced many big risks to get as far as Libya. They kept coming, and the horrendous death toll this spring got the media so excited that the politicians had to do something — but not, of course, anything that would actually result in more people arriving in Europe. So they gave more money to Operation Triton, but they still didn't give it a life-saving role.

Instead, they came up with some nonsense about saving the refugees from drowning by destroying the people-smugglers' boats on the shores of Libya before they went to sea. It's the "new slave trade," and we're just saving the refugees from themselves. Of course, the EU hasn't actually destroyed any boats (which would be an act of war against Libya).

What they didn't reckon with was their own navies, who come at this from a very different angle. The sailors don't have to worry about the voters, and on the whole they are not terribly fond of the politicians, but they certainly do know about the sea. And one of the oldest traditions of the sea is that you do not leave people to drown.

Everybody who has spent much time at sea knows that it is an intrinsically hostile environment. Alone and unsupported by technology (including flotation gear), you will survive in the water for a matter of minutes, or at most, if you are very fit and lucky, for an hour or two. So when you see somebody in the water, you do everything you can to save them — because another time, it could be you.

When I was in the navy we were once first on the scene of a collision in which a tanker had exploded in flames. There was little chance of survivors, as oil had spilled and the sea was on fire around the stricken ship, but we searched all night and into the next day anyway. Nobody questioned why we were doing it, nobody even discussed it. There is no higher priority in a peacetime navy.

I was not on the warships attached to Operation Triton to overhear the conversations of the people on the bridge, but I am sure that they were outraged by their orders. So they gradually pushed out beyond the appointed bounds of Operation Triton to the places where the people were actually dying, and none of the politicians dared to expose themselves as heartless bastards by telling them to come back.

Eventually it has become the new de facto policy of the European Union — just like the old Mare Nostrum policy, before the European governments got at it.