The first thing Eric Crowe does when I hop into the cab of his snowcat groomer at the Lost Lake parking lot is head for the hills; though it's not even 5 p.m.
Feb 28, 2018 5:00 PM By: Leslie Anthony 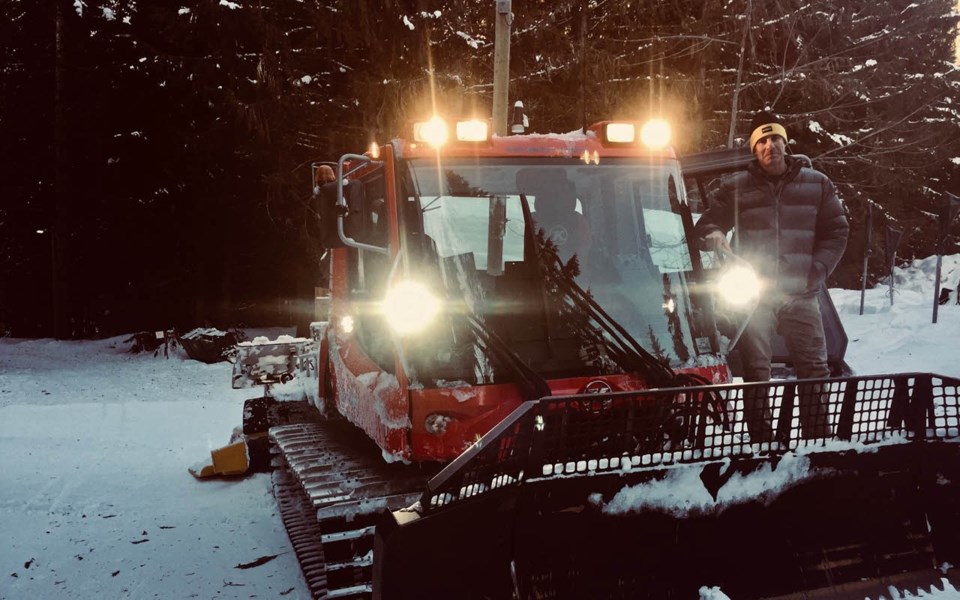 The first thing Eric Crowe does when I hop into the cab of his snowcat groomer at the Lost Lake parking lot is head for the hills; though it's not even 5 p.m., he wants to get his machine off the lake's night-lit loop stat so folks can ski it unimpeded as long as possible. He'll return later, long after the loop shuts down, to groom. It's a well-entrenched routine: Eric has been servicing the RMOW's cross-country trails at Lost Lake since 1988, before many of the seasonal workers who call Whistler home were even born.

Such a gold-watch spell must come with its fair share of stories, I offer. "Yup," he deadpans. "I've seen some things."

When we head onto "Upper Panorama," Eric hops out to pull a rope across to close the trail. As we grind uphill I get my first taste of trail grooming: too narrow for track-setting, this is a one-way route for skiers, so we're just tilling. The previous day's half-metre of snow aids our enterprise considerably, but what were the last few weeks of warm valley weather like?

"Not too bad, really," says Eric, staring straight ahead while his hands work in Ninja-like fashion to steer, and raise, lower and tilt the front blade as he talks. "The trails held up well through the January rain and we only had to close one of them, since reopened."

Whistler's up-and-down weather is this job's obvious big challenge, but that, too, becomes routine. "We groom with snowmobiles dragging tillers when the snowpack is low, both because it's more economical and not as hard on the trails as a big, heavy cat," he notes.

Besides Eric, the RMOW employs two other groomers. It typically takes them seven of their shift's eight hours to groom the system's trails, which includes tilling all, then subsequently setting tracks on many. Some trails require three passes. Though he's usually out by himself, Eric relishes the chance for a few hours of conversation on his favourite topic: fish biology, fish management, and fishing in the corridor. Once we've worked our way through that can of worms, however, I want to know what kind of critters he sees on the trails.

"Deer, coyote, bobcat, and sometimes mountain lion sign," he recalls. "One time I found a deer carcass in the middle of the trail, so I got out and dragged it off into the snow, and when I came back it was in the middle of the trail again. Bobcats. In March, if there's been three nights without freezing and maybe some rain, I'll see toads and salamanders crossing the trail on their breeding migrations. Sometimes they get stuck in the set tracks."

By this point we're far out on the wide-open expanse of the Chateau golf course with its sweeping vistas; as the sun sets on a bluebird day, colour swims in the snow and we alternately enjoy inspiring views to Whistler Blackcomb and the west side mountains. A stiff breeze all day has built drifts, and Eric excitedly busts through them while he blades them down — a little variety to staunch what can often be monotony.

"Cruising around on a night like this is pretty nice, but it's not really an easy job. When it's snowing hard you can't see and have to follow the markers, which can be tense. Sometimes frozen snow becomes really challenging and you have to go through a cycle to get it good again. There's lots of creative snow farming — like taking clean snow that slides off the Audain Museum and from parking lots to fill in certain areas. Just like on the mountains, the valley has microclimates — for instance, Lost Lake's east side gets far less snow. You have to manage around your most limiting places, and if you don't load them up with extra snow early on, you'll have problems later in the season."

Beyond these expected challenges, were there other problems?

"Well, people walking on groomed trails is rare; most see and respect that it's a cross-country area and there's lots of good signage. But over the years I've had a few snowmobile problems, though it's usually drunks."

If someone does ride on the trails and he can find them, Eric will let them know it's not cool, that they're despoiling one of the gems of the Whistler visitor's experience — not to mention a favourite of locals.

"With Callaghan opening, cross-country has never been more popular in Whistler," he says. "There's youth programs and I've even seen five-year-old kids ripping it up on skinnies. Sooner or later you're gonna see some national-calibre athletes coming out of the corridor."

As we circle back to the base of a hill we previously groomed, I admire the corduroy Eric has created.

"Half a metre of cold snow is easy to work with and as good as it gets for skiers. Cross-country is at its best three days after it snows," he finishes.

That's tomorrow, I think, and make a plan to get out there.