Forty years after it was incorporated Whistler seems pretty simple, almost logical, in its basic layout: Blackcomb's on the left, Whistler Mountain's on the right, the village is in between the two. But it wasn't necessarily always going to be so.
Aug 19, 2015 6:00 PM By: Bob Barnett 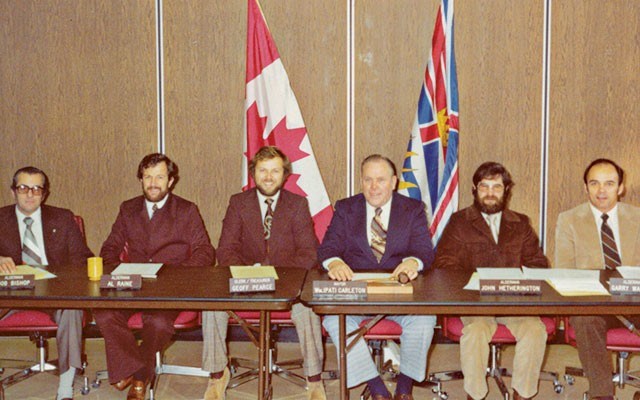 Ready to resign Some members of Whistler's first council went to Victoria with resignation letters in hand to force the province's hand in making a decision about the "Whistler experiment.". Photo courtesy of the Whistler Museum and archives

Forty years after it was incorporated Whistler seems pretty simple, almost logical, in its basic layout: Blackcomb's on the left, Whistler Mountain's on the right, the village is in between the two.

But it wasn't necessarily always going to be so.

Following a "soft opening" in the winter of 1965-66, Whistler Mountain slowly grew in popularity among Lower Mainland skiers. By 1973 Whistler had built a reputation on its vast terrain and abundant snow, and a building frenzy followed. A-frame and Gothic-arch cabins were popping up all over the valley. The Squamish-Lillooet Regional District had neither the resources nor the interest to regulate what was basically a weekend community, so for developers it was the Wild West.

Nevertheless there was talk of creating a commercial focal point in the valley. Norm Paterson, who had developed the Alpine Meadows and Emerald Estates subdivisions, thought his property at the south end of Green Lake would be ideal. John Taylor had acquired the Jordan's Lodge property from Peter Alder's Garibaldi Recreations group and believed commercial development should be on his property at Creekside.

Paterson, Taylor and a few other members of the Whistler Development Association were formulating plans in 1973 when the provincial government suddenly slapped a freeze on all commercial development in Whistler.

Timing is everything. And the fact that British Columbia's first socialist government — Dave Barrett's New Democratic Party — was in power in 1973 proved critical to the development path Whistler ultimately followed.

While the NDP temporarily corralled the speculators it also brought order to the frontier... by commissioning a study. A 1974 report by James Gilmour, of the Ministry of Municipal Affairs' planning services department, probably did more to shape Whistler than any other single document. Gilmour raised concerns about the valley's capacity for development, the lack of a sewer system, the open garbage dump and the need for a community plan. He also made recommendations for a commercial centre.

Gilmour also recommended the town centre be located "...in the vicinity of the present garbage dump" on the north side of Whistler Mountain, between Whistler and Blackcomb. The site was Crown land, "Which means greater control and avoidance of a potentially exploitative quasi-monopoly situation that could develop if a single centre is on private land."

Gilmour further recommended a new form of local government for Whistler, in part because the province was looking beyond the Lower Mainland market and saw Whistler as a destination resort.

"...normal forms of municipal organization may not be appropriate for a resort town such as Whistler, which is proposed to function as a resource for all British Columbians," Gilmour wrote. "Under normal forms of incorporation, only permanent residents participate in determining the future course of community development, yet many more non-residents than residents will be paying for the community's support and will be affected by its future development. This suggests that some special form of local administration may be appropriate for the future."

The NDP introduced the Resort Municipality of Whistler Act in the spring of 1975. Whistler residents and property owners elected a mayor and three aldermen that summer. The province would appoint a fourth alderman, who would ensure its interests were maintained.

On Sept. 6, 1975 the first Whistler council was sworn in: Mayor Pat Carleton and elected aldermen Garry Watson, John Hetherington and Bob Bishop. Al Raine was appointed as the province's representative.

"Whistler is an experiment," Municipal Affairs Minister Jim Lorimer said at the swearing-in ceremony, "and if it is successful we expect to incorporate other communities that have a similar problem, places like Tofino that have a small residential community but thousands of visitors in the summer."

The new council went straight to work on a sewer system, implementing basic zoning and administrative bylaws, and developing an official community plan. But barely a month after council took office the NDP called an election... and lost.

Bill Bennett's conservative Social Credit government was antithetical to most NDP initiatives, and Whistler was definitely a NDP initiative. Naturally, the Whistler Development Association saw this as an opportunity to redirect the community plan toward their properties.

A public hearing for the plan drew most residents to Whistler Mountain's L'Apres restaurant on Jan. 9, 1976. There, Norm Paterson accused council of profiting from the plan: "If this community plan proceeds it will only benefit a few developers who are on council," he said.

Mayor Pat Carleton broke his gavel calling for order and telling Paterson to sit down.

Despite opposition from the developers, the community plan — which also foresaw development of Blackcomb and lifts on Whistler Mountain's north side — was supported by most residents and property owners. But the provincial government still had to approve it. For three months requests for a commitment to the Whistler experiment went unanswered.

Finally, a frustrated council decided to resign if the province didn't support the plan. Carleton, Raine and Watson went to Victoria with the resignation letters in their pockets and confronted the new Municipal Affairs Minister, Hugh Curtis.

"We sat outside his door because we couldn't get an appointment," Watson recalls.

"When we finally got in to see him he described how he'd had a delegation from the Whistler Development Association — planners, a bunch of people, a great model. He figured they must have spent $10,000 on the model alone. They had trestles set up in his office to show it.

"So here had been these guys telling this story about this magnificent plan and everything, and we were getting worried," Watson continues. "And Curtis — I'll never forget this — he said: 'You know, I never saw such a display of 'bullshit baffles brains' in my life.'

"I remember looking at Pat Carleton and this grin started to come across his face. Suddenly we realized Curtis wasn't siding with them. He said: 'Gentlemen, I agree with what you're doing.'"

And so Whistler Village was located between Whistler Mountain and Blackcomb.

Norm Paterson eventually sold his property at the south end of Green Lake. Many years later it became Nicklaus North.

Most of John Taylor's Creekside property was developed — over several decades and with some acrimony — as single-family residential homes.