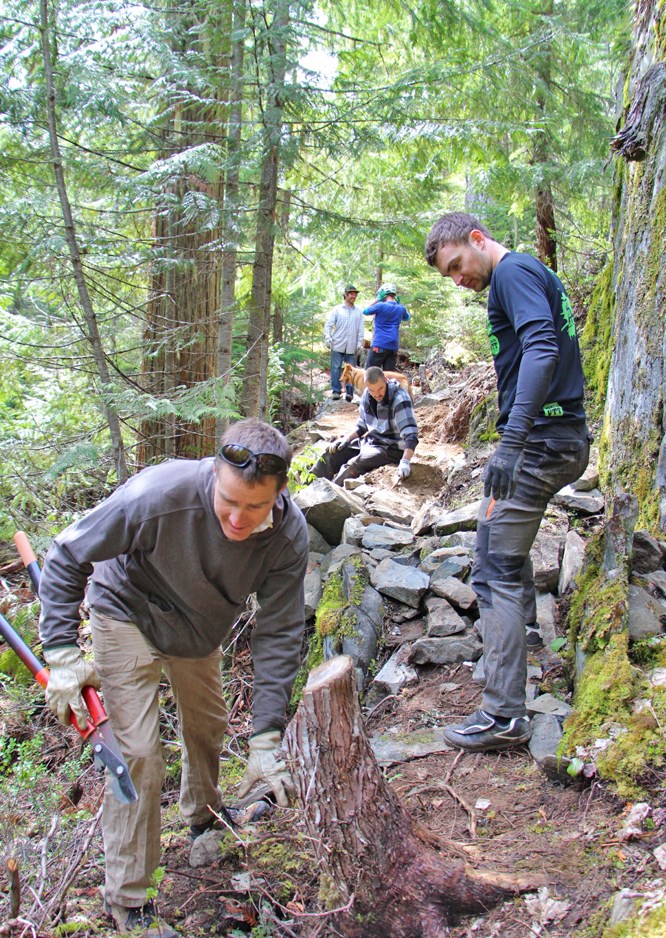 Trails need support from the mountain bikers that ride them. Photo by Bike Pirate/courtesy of WORCA

As mountain bikers in the Sea to Sky, we’re pretty lucky to have such an extensive trail system, one that grows incrementally every year. The best part is that you can access all those trails without paying a single cent, a welcoming prospect if you had to shell out thousands of dollars for a mountain bike. It’s a liberating experience taking off into the woods and getting one’s kicks riding these trails, but as country music singer David Chamberlain put most eloquently, “Freedom Don’t Come Free.”

I’ll confess I was late purchasing my WORCA membership this year. We did, after all, have a pandemic spanner thrown in the works in the early spring and that cast WORCA’s most popular event—the weekly Toonie Race—into digital territory. You can still do the weekly race virtually (without the traditional, not-so-physically distanced mass starts) during a weekly time window by tracking the course with the trail app Trailforks. You then are automatically entered into the draw for the weekly prizes and also receive a voucher for food and a beer at one of the sponsoring establishments. In terms of maintaining value for a $60 annual membership fee during a summer of shutdowns and restart plans, WORCA has done really well.

But paying that $60 every year really isn’t about racing, though many Toonie and Phat Wednesday race participants might see it as such. It’s about backing the organization that maintains our trails, that helps secure funding and government support for projects such as Whistler’s Alpine Trail Network, the initiative that gave us Lord of the Squirrels. I’ve waxed poetic about this plenty before, but Whistler’s mountain bike community does need to be reminded from time to time that there are no trail fairies that come out at night like the Underpants Gnomes. All work is done by a limited crew of paid trail builders who are supported by volunteers. The RMOW has had to cut a lot of funding to non-essential programs this year (understandably, given the reduced revenue of the pandemic) and a lot of trail work falls into that category. So now is the time to contribute.

You might be one of those Whistler mountain bikers that has never attended a WORCA event and never plans to, and that’s OK. You might feel that the $60 price tag is a little steep, especially if you’re not participating in any of the WORCA programs. Good news for you! You can donate however much you want to the trails directly. Trailforks has a Trail Karma option that will forward your donation directly to the trail association of your choice, minus a small PayPal fee. Think about the trail network where you ride the most. When I grind up Sirloin to ride the sick-gnar that is Whistler’s Westside, I’m thankful for those new mini-bridges that keep my tires out of the muck. I’m thankful for the drained and improved sections of Industrial Waste after the dismal weather we had the last couple of months. I can’t wait to ride Chipmunk Rebellion, once it’s completed, of course. For all of this convenience, I’m more than happy to give back more than a few bucks, especially if I frequent my favourite trails several times a week.

If you’re still not convinced, Trailforks is holding Trail Karma Month for the duration of July with $16,000 worth of prizes. That means your donation might yield some new parts for your bike, and we all know how expensive they can be.

Some trails in Whistler aren’t under WORCA’s jurisdiction to maintain, nor are they the responsibility of commercial operators such as the Whistler Mountain Bike Park. They were built by dedicated mountain bikers who ask for little in return. Signs for these trails can be found in the forest and implore riders to exercise good judgment such as not riding the trail in wet conditions. They will sometimes have an email address where you can e-transfer a donation that goes directly to the builder. If you love riding these particular trails over and over or—heaven forbid—use an e-bike to access them multiple times a day, don’t be afraid to give your trail karma score a boost.

Vince Shuley hopes you enjoy the ride. For questions, comments or suggestions for The Outsider, email vince@vinceshuley.com or Instagram @whis_vince.