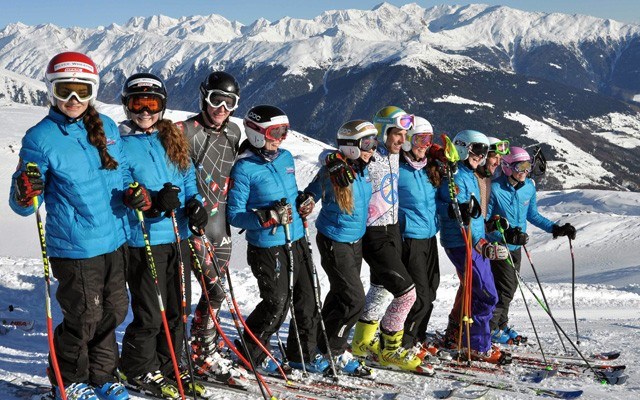 "Insanity is doing the same thing over and over again and expecting a different result."

It's been an Olympic drought of epic proportions. Twenty years! And at first glance, there's absolutely no reason for it. Canada's Alpine Ski Team — at least on paper — should be a regular provider of Games' medals. Yet the team hasn't delivered on its potential since Eddie Podivinsky shot down Norway's Kvitfjell downhill to fame and fortune in 1994.

That's not to say Canada's gate bashers haven't been successful on the international circuit. Au contraire. Eric Guay, Mannie Osborne Paradis, Jan Hudec, the Janyk siblings, Marie Michelle Gagnon — they've all made their mark on the World Cup. But as some critics have suggested in recent years, it seems like our athletes are finding success despite Alpine Canada's national development system... not because of it.

And things are going to get a lot worse if they can't score in Sochi. Olympic medal performances, you see, have become the new benchmark for funding in this country. Doesn't matter how shiny your legacy... or how fancy your PR. The message has been made crystal clear: If you want any national development money for your sport, your athletes need to earn podiums in Russia.

So what to do?

Let's be honest. Alpine ski racing is not that big a deal in North America. Like road racing for cyclists — or soccer/football even — the sport's nexus is across the pond in Europe. And the research is clear: you can't really understand the sport's culture — you can't fully recognize what it takes to win at this level — unless you've spent time racing in the Alps. And the sooner you get that experience, the better you can prepare yourself to compete with your Austrians and French and Italian peers.

And yet, traditionally, Alpine Canada hasn't sent athletes on extended European trips until they're well into their racing careers. Absurd? You bet.

I know. I know. Some of you already think ski racing is a waste of time and space. It's obsolete, irrelevant to the 21st century sliding experience... and restricted to only the richest of kids. And you may have a point. But try explaining that to a passionate 13 year old who dreams of following in the footsteps of Nancy Greene and Kathy Kreiner and Karen Percy and Kerrin Lee...

We don't often get to choose the sports our children fall for. We can introduce them to various activities, imbue them with a sense of culture and tradition, but we can't force our own passions down their throats... or keep them from nurturing their own hopes and dreams. I'm sure there are a few moms and dads out there nodding their head in assent right now. You see, it's very hard to say "no" when your child approaches you with the statement: "I wanna be a champion...(fill in the blank), hockey player, skier, gymnast, ballerina, whatever."

Which leaves organizations like the Whistler Mountain Ski Club with a headache of a conundrum. Keep following the same tired path to Olympic mediocrity... or challenge the conventions and try some new initiatives independent of the national development program.

An aside: A quick look at this year's Olympic team would suggest that Whistler may have Canada's highest per-capita representation of athletes in Sochi. It's a responsibility, I believe, that we should take very seriously.

But where was I? Oh yeah — how does a club like the WMSC defy the status quo without being labelled a troublemaker? How does it provide its junior racers with the kind of tools that 21st century ski racing demands without breaking the bank?

Let's put the question on its head for a moment. Where do promising European hockey players go to hone their craft? What country is considered the best developer of young hockey talent? Why... Canada of course. Where once Euro players were found only in our Major Junior ranks, now they're coming across the Atlantic at an increasingly younger age. And it's not easy for them. Loneliness, alienation, sickness, injury — they have to overcome it all. But they obviously understand the benefits.

So what's stopping our young ski racers from doing the same thing in Europe?

As it turns out, nothing.

Which is why former World Cup champion, Rob Boyd decided to test the waters with a low-cost European adventure last month for a select group of under-16 year old WMSC athletes. It was all the club's doing too — no national team affiliation, no Alpine Canada hoops to jump through. But enough of my words. Let's listen to Boyd.

"It came to our attention that there was a desire on the part of athletes (and parents) to have a 'European Race Experience' for our pre-FIS racers," explains the club's technical director. "I still have some good contacts in the Alps so I decided to see what kind of a training/race package I could put together for a one-week blitz." He stops. Shrugs. "I know that sounds extravagant, but I think it's a necessary step in a young racer's development today." He sighs. "Winning is hard, you know. And it's expensive too. But if we're serious about ensuring success for our young ski racers, we have to find ways of training smarter than the other guys."

People often forget just how well connected Boyd is in the world of alpine racing. In the South Tyrol region of northern Italy, for example, the 47-year-old is still considered ski royalty, though his downhill victories there are nearly three decades old. Still, it's his various coaching stints with Canada's national ski team that have cemented those connections. And for this trip, he pulled out all the stops.

"First off," he says, "I got in touch with my old friend Heinzpeter Platter (with whom Boyd worked on the Canadian Women's Speed Team for five years leading up to the 2010 Olympics). Heinzpeter lives in Mals, Italy — a small town of 2,000 or so Sud Tirolers at the west end of the Venosta valley, southwest of Innsbruck. He and his family ski out of this cool, little resort and race club called Watles (where we had trained several times with the National Team)." He pauses. Takes a long breath... Chuckles. "Well, the moment I mentioned my idea, Heinzpeter was all over it, and immediately insisted we visit. It was an invitation we just couldn't refuse!"

And just like that, they were off to the races. "We stayed at the Hotel Greif amidst old churches, steeples, castle ruins and cobblestone streets," continues Boyd. "A modern sports school and public pool were located nearby for some dryland and recovery activities and a ski room where the parents kept all the kids' skis perfectly tuned."

The young Canadians skied and trained in Watles for two days (a 20-minute drive from the hotel), had two days of skiing at Sulden, a larger resort 35 minutes to the south, and competed in an Italian GS race at yet another ski hill, explains Boyd, "where 138 U14's and U16's all ran pretty much the same course for two runs." He laughs. "Having no ranking in this region our racers got a chance to "attack from the back" starting last in both boys and girls groupings! Needless to say, the course became very rough, the light was flat and foggy, and thankfully our kids skied it smart and came away unscathed."

But there was more for the WMSC contingent. "Despite it being a dry winter in most of the Alps, we lucked out by landing in a snow zone, where we enjoyed some powder skiing on a two metre base, some great slalom and giant slalom training, a little mingling with Swiss FIS racers, and savoured great schnitzel, pizza, bratwurst and spaghetti aioli (to name but a few of the treats). Our skiers had their eyes opened to an incredible portion of the Italian Alps, they got to train and race in typical Euro conditions and soaked up every aspect that this great trip offered."

And that really got Boyd's little grey cells bubbling. "Imagine," he says, "if somehow the club could find a way to set up a semi-permanent training base in the Alps where our kids could come and settle down for various training or racing stints. "His eyes shine with excitement. "It would totally change the equation. Suddenly European racing — the scene, the competitiveness, the culture — wouldn't seem so intimidating anymore."

Pie in the sky? Wishful thinking? Not really. In fact, there's already been a precedent set. "One of the big American ski racing schools back east — Green Mountain Valley Academy to be precise — has had a European program in place for a while now," says Boyd. "And I hear that a few other clubs have followed GMVA's lead. I'll be really curious to see how these programs develop..."