"If you cry, you're off the team." - Toria Whitney She's the best skier not on the national team. And a lot of gals with "Canada" stencilled on the back of their jackets are feeling the heat. Which is the way it should be.
Feb 27, 2009 6:38 AM By: Michel Beaudry 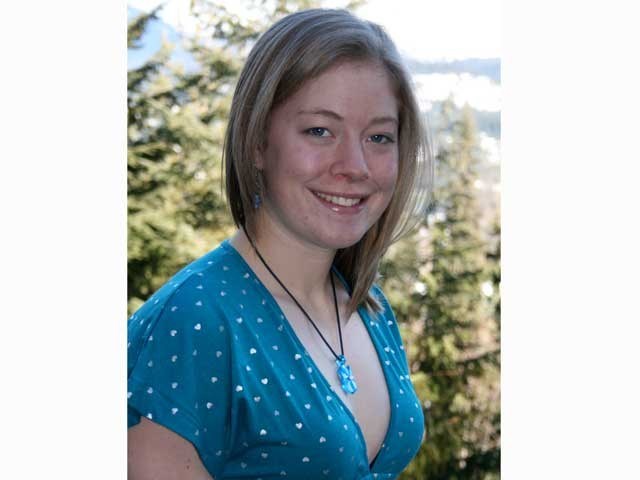 "If you cry, you're off the team."
- Toria Whitney

She's the best skier not on the national team. And a lot of gals with "Canada" stencilled on the back of their jackets are feeling the heat. Which is the way it should be. In a blistering return to form after a year-long timeout to rehabilitate a damaged knee, Whistler's Victoria Whitney has emerged as one of the most promising up-and-comers in the country. Call her unusual. Call her fiercely competitive. Or highly motivated. Or surprisingly focused for an 18 year old. Whatever. As far as potential goes, the young speedster they call Toria has only just begun to show her stuff.

"It's her attitude that I like," says national women's coach, Rob Boyd. "Toria is a charger. She loves to push her limits." One of the first to recognize her talents, the former WMSC coach has been following Whitney's progress this year with great interest. "It's clear she's not afraid of speed," he continues. "Her mistakes right now are mostly mistakes of aggression." He pauses. Smiles. "And that makes a lot of the other girls really nervous."

No question about it. In the talent-challenged wake of Canada's three frontrunners - Britt Janyk, Emily Brydon and Kelly VanderBeek - Toria is one of the few young speed racers with the chutzpah to challenge the status quo. And come the '09 national championships, she'll be able to gauge just how close she is to that leading group. Meanwhile, she has the World Junior Championships to contend with. "That's a really big race for me," says Whitney of the under-19 event that kicks off this weekend. "It's one thing to do well in North America. But competing against Europeans is a whole different matter."

Indeed, with a December Nor-Am super-G victory in her pocket (and a handful of top-10 results to go with it), Toria was sent to Europe with the National Development Team in January to test her mettle against her continental peers. It turned out to be an eye-opening experience for the young Whistlerite. Listen to what she has to say about it in her blog: "It was amazing to see how much deeper the field is in Europe. There are just so many more good racers! If you make a little mistake then you're done. There are people every couple hundredths of seconds, all throughout the top 30!"

Sobering for sure. But rather than intimidate her, the European experience seems to have spurred Toria on to even greater accomplishments. Not renowned as a great "turner," she came back to Canada earlier this month and immediately imposed herself - in a technical event! And she did it in true Toria style...

Let me set the stage here. Starting a Nor Am giant slalom race at Nakiska way back in the field with bib #32, Whitney suddenly found herself in third place after the first run. Could she hold it together over the final run and score big here? It didn't look good at first. "I made the biggest mistake ever on the top of the run," she writes in her blog. "Everyone (who) saw it thought for sure I was done. I saw the video after and couldn't help but laugh. Not much more than a few turns into the course I came out of a left-footed turn, and I don't even know what I did... But I found myself with my right (outside ski) up by my head, so I was doing the sideways air-splits, (with) my pole between my legs. After that I was barely making gates, and crawled my way to the pitch. By that time I was so pissed off (with myself) that it was almost too much to ski and stay in the course. I made another mistake coming onto the pitch... After that I realized I needed to calm down a bit if I was going to finish this run. I did and I was giving it for the rest of the run. I came through the finish expecting to be pretty far back, but in the end I kept my 3rd place, and still top Canadian and top junior."

But enough of ski racing. What really impresses me about Toria Whitney is the way she was raised. I mean, what can you say about a young girl who rounded South America's Cape Horn (the Everest of offshore sailing) at the tender age of six years old? Who celebrated her fourth birthday on Spitzbergen Island at 80o north, at the time the furthest point north ever sailed by a Canadian yacht? Who spent the greater part of her youth crisscrossing the globe on a 71-foot sailboat, participating fully in the family ocean-touring business?

I mean, this is about as unconventional a lifestyle as you can imagine - even for Whistler. But Toria has nothing but positive things to say about her quirky upbringing.

"It was an amazing way to grow up," she tells me, her eyes shining with the memories of her years at sea. "We usually had 10 paying guests on board at a time. Char (sister Charlotte who is five years older) and I were crew." She laughs. "At first some of the guests would be a bit nervous about having us around. But it didn't take long for them to realize we knew what we were doing. After that, it was mostly smooth sailing."

We're sitting at the foot of an immense, wall-wide global chart in the Whitney family home in Alpine Meadows. Toria is taking me on a virtual trip of her many sea voyages. From Australia to Indonesia, from the Sea of Japan to Alaska's Aleutian Islands, from the Mediterranean to the Norwegian coast - seems like there's nowhere she and her family haven't sailed over the years. And yet she recounts her stories with the understated manner of a much older woman. At times it feels more like I'm talking with a peer than a teenager. Composed, confident - and eminently articulate - Toria strikes me as somebody who might not always be in tune with kids her own age.

"I'm not the most tolerant of people," she admits. "You know, weepy girls and emotional problems and such - I get a little impatient with all that."

Adds B.C. Alpine Director, Bruce Goldsmid: "She doesn't suffer fools, that's for sure." And then he laughs. "She did a lot of her early-season training with our men's team this year. She certainly kept those boys on their toes..."

The source of Toria's warrior spirit is clearly easy to identify however. Both her parents - Al and Irene - are born adventurers and inveterate travelers. "Our sailboat business wasn't about making money," explains Irene. "It was about living well, sharing a sense of wonder, learning to expect the unexpected, seizing the moment, enjoying the adventures and opportunities that can be created out of inconvenience or adversity - and I think our guests appreciated that about us."

So did their children. Both girls were born in the Queen Charlotte Islands - "one of my favourite places in the word," enthuses Toria - and as soon as they were self-propelled, were expected to participate fully in the onboard chores. But neither sister ever questioned it. "It was just the way it was," shrugs Toria. "We all had responsibilities."

This is how mom Irene saw it. "Both our girls had remarkable early life experiences, both witnessed real adversity, many outstanding natural phenomena, and were a part of earning the family income. It was a great school to grow up in."

But it all had to end sometime. And when Al and Irene decided to sell their boat in 1999 and return to dry land (at least for a while), Toria was devastated. "I was totally into the boat - didn't want them to sell it at all." A hint of a smile flits across her face. "I even offered to buy it off my parents - for a dollar..."

Toria was all of nine at the time. Grade 5 was looming. "For the first time in my life I was facing having to go to school full-time," she says. And stops speaking for a beat. "That was a little weird - for sure! I was used to not wearing shoes - or clothes for that matter. It was quite a change, to put it mildly."

But she put up with it. "To me, Whistler was just a place back then. But at least it wasn't the city. I was definitely not an urban person."

Though her heart still pined for the sailboat lifestyle, Toria thrived at Whistler. Ski racing, bike racing, triathlon racing even: whatever sport Toria set her mind on, she did well at. And it looked like she was on the fast track to success, particularly in ski racing. That is, until a crash in Chile in the Fall of 2007 sent her back to Canada for a date with famed knee surgeon Pat McConkey.

For some athletes, that could have signalled the beginning of the end. Not for Whitney. "Blowing my knee helped me a lot - mentally, physically, emotionally even," she says. And then she explains what she means. "When you have an injury, you go back to basics. You break everything down and start from scratch again." She smiles. "When I got back on snow last spring, I found that I was a lot stronger than I had been before my crash. And that gave me a lot of confidence for the coming year."

Her newfound confidence clearly manifested itself in those early season results. And I can't help but ask: Is Toria thinking about an Olympic berth perhaps? She gazes at me a long time. Finally laughs. "We'll see," she answers. But the look in her eye says it all. It's a long shot, for sure, but don't be surprised if Toria confounds the odds-makers yet again. After all, challenging the impossible is what the Whitneys are all about