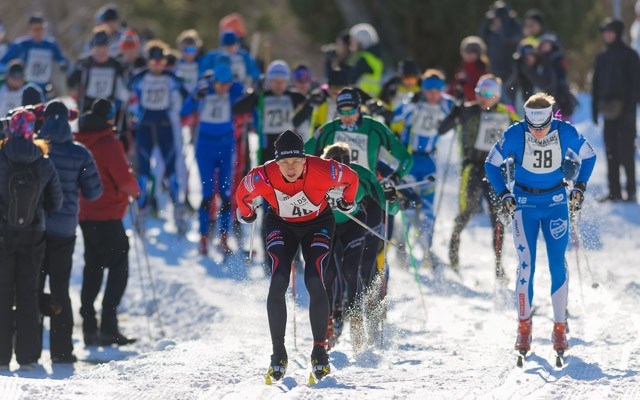 supporting sport Research at the SRTC has found that skiers who "double pole" can win races, with no need for grip wax. Photo by Stefan Holm/Shutterstock.com

A March afternoon spent touring the state-of-the-art facilities in the Swedish Winter Sports Research Centre (SWSRC) at Mid Sweden University's Östersund campus offered a serious learning experience. We'd seen how physiology and biomechanics researchers employed sophisticated modern technologies to collect novel data on precisely what athletes' bodies did during various winter sports; we'd also seen how detailed computer analyses of these data could aid in performance. Our final stop had been a new atmospheric chamber that simulated altitudes up to 9,000 metres at a range of temperatures. Not only was this an ideal tool for testing altitude and temperature effects on athletic performance, but also for testing how various materials reacted to these factors. For our group — likely the largest critical mass of North American gearhead outdoor journalists to ever descend on this locale — it was the perfect segue to our next stop: the associated Sports Tech Research Center (STRC) on the other side of campus.

STRC is a multidisciplinary research centre with a focus on sports engineering, product development, and human/equipment interaction. Research centres on three areas: 1) innovative development and verification (testing) of products, materials, technology and methodology for various sport and outdoor activities; 2) rehabilitation and special needs equipment for the disabled; 3) additive manufacturing (3D printing) for medical applications and material/process development. At the door we met technical director Mikael Bäckström, who would lead us around. Decked out in his favourite fishing pants and shirt, armed with a boatload of rhetorical questions, he channelled any number of humorously officious Scandinavian TV characters.

"Wrong. None. Testing consistently shows nothing is faster than P-tex. When you get into temperature considerations and base structuring it's a little bit of a different story. As for fluorocarbon waxes, they're toxic carcinogens — a health and environmental disaster. Traces linger in the air and for years on the ground around race sites."

Now we were all ears.

The debate Bäckström conjured was relevant. For instance, wax-dependent kicking and gliding (a.k.a. "diagonal stride") is the oldest and best-known cross-country ski technique, employed in Nordic style (i.e., non-skating) races. But many such races today see discussion between competitors and coaches over whether to employ classic technique, or forego it in favour of all-out "double poling" (propelling yourself along the track with the upper body only). According to physiological data generated at the SWSRC, top skiers could once upon a time achieve only 80 per cent of VO2 Max double poling, but today were able to reach nearly 100 per cent. With that kind of physical output it's no surprise skiers were winning shorter Nordic races by exclusively double poling. With no need for grip wax underfoot and untreated skis able to glide faster under certain conditions, materials research begged the question of whether diagonal stride could become obsolete.

That thought was left behind as we steered into the additive manufacturing lab. Here, machines busily 3D-printed a mind-boggling array of gizmos out of plastic and metal. It was like walking into Q's secret gadget facility in a futuristic James Bond movie. Bäckström walked us through the medical breakthroughs represented on countertops and underway before our eyes: the virtual planning and direct manufacturing of customized implants for craniomaxillofacial reconstruction (essentially jaw replacement), which both decreases traditional costs and increases patient safety; the use of electrochemical etching and titanium mesh in the search for the best structures/surfaces for osseointegration (bone cell growth), promising less implant hardware for breaks, possible elimination of screws, and knee and hip replacements that are less likely to loosen, saving costs of re-do operations and greatly reducing postoperative morbidity. The number of medical and industrial objects that can be made stronger and longer-lasting through these methods is lengthy, and though our heads shook at the possibilities, there was more.

The textile lab, where the STRC works in conjunction with several big-name outdoor brands, had numerous intriguing ways to simulate real-world conditions of use. Like an apparatus that could stretch and/or bend any material the way a moving human body would — only tens of thousands of times under varying conditions of temperature and moisture. Even that wasn't the end, however, as Bäckström had a jaw-drop coup de grâce — a recently christened wind tunnel so large and powerful it was housed in its own sealed building. Materials (like wind or waterproof textiles) and structures (like tents) can be tested as well as human performance. A honeycomb intake at one end creates a laminar flow in the air, so that it was evenly distributed (not swirling) as it moved into and through the see-in tunnel. If you stood outside at the wrong time, Bäckström advised, you'd be sucked through the grill in little honeycomb-sized bits.

We'd left the STRC duly impressed, but I became more so when made aware of celebrated products that had been collaborative accomplishments with the centre, putting MSU, the town of Östersund, and surrounding region of Jamtland on the global outdoor industry map. The prestigious ISPO Awards annually honour the most exceptional products in the sports industry. Year after year, Jamtland brings home the goods and last year was no exception. Local company Woolpower won 2014 ISPO Gold in the accessories category for a felt insole made of recycled merino wool — an idea built on a degree project by MSU Sports Tech student Kajsa Nilsson. Gold in the off-piste category went to Åre Ski Factory and the Extrem brand's innovative and uniquely designed Opinion model. The world's first community-developed ski was literally birthed on the web by forum members on the Freeride.se ski site, where anyone could contribute ideas for the ultimate modern freeskiing ski. As part of his Sports Tech thesis, Fredrik Andersson developed a ski binding — the Beast 16 — that solved the freeriders' dilemma of a light and stable touring binding that didn't prerelease on demanding descents. He sold parts of the solution to Dynafit and landed a job as its product developer.

"What are the strongest things known to man," Bäckström had asked in the 3D printing lab. No one had a clue, but I have a few suggestions: curiosity, innovation, invention.

For Part 1 go to www.piquenewsmagazine.com, April 23.