What we don't know

As Snapping Turtles go , the one basking on a partially submerged log was a monster.
Sep 6, 2019 2:30 AM By: Leslie Anthony 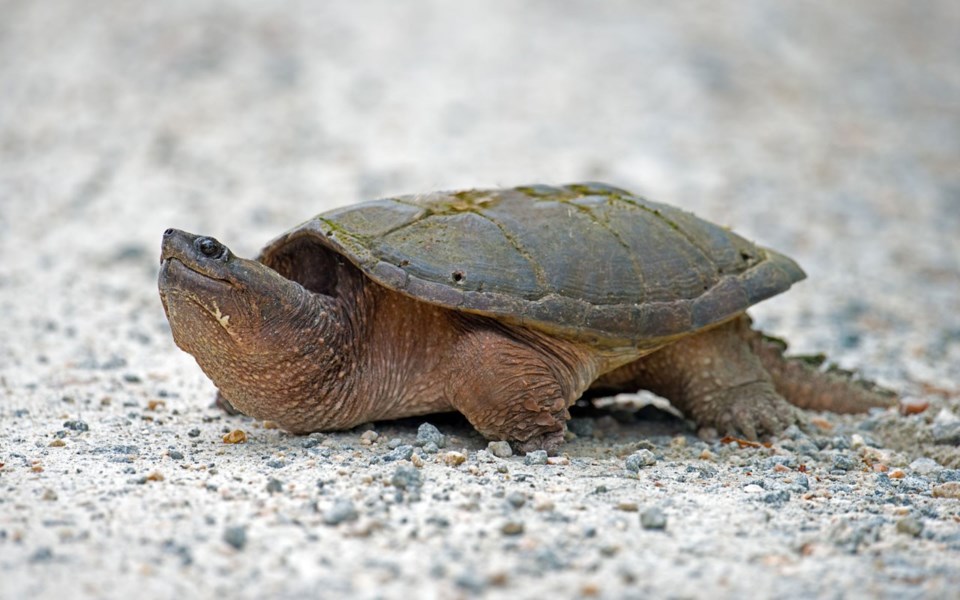 As Snapping Turtles go, the one basking on a partially submerged log was a monster. Never mind that unlike the more gracile Painted Turtles cohabiting this near-north lake—shiny, hand-sized half-domes who happily stacked themselves atop the most tenuous platforms at the slightest hint of sun—hauling out was infrequent behaviour for the more aquatic snapper. Maybe it was warming itself. Equally maybe, it was exposing its algae-coated shell to the drying sun in hopes of reducing the plant matter, or airing its dinosaurian skin to kill off parasites.

But if you were Patrick Moldowan, a turtle researcher at the Algonquin Wildlife Research Station (AWRS) in Ontario's Algonquin Provincial Park, why the turtle was lounging on a summer day in 2018 was immaterial. What did matter was the single data point it might represent in a 46-year study that involved marking, radio-tracking, and repeatedly recapturing the area's turtles to understand their population demographics, movements and growth patterns. In other words, Moldowan needed to know "who" this turtle was.

Likewise unimportant are details of how Moldowan and two summer research students wrestled the behemoth—12 kilograms and with an almost 40-centimetre-long shell—into their already packed canoe, and, noting the rusted wires of its missing ID tag, paddled it back to the lab for identification. There, they made a heartening discovery: the turtle was R10. It hadn't been seen in 22 years.

Inducted into the study in 1979 at the tender age of 40-ish years, R10 was a young adult male living the snapper good life in a constellation of waterways north of the station. Recaptured six times between 1985 and 1992, each weigh-in had showed slow but steady growth. Last seen but not recaptured in 1996, R10 then disappeared, and was assumed to have died.

When re-found by Moldowan, age 80-ish, R10 had almost doubled in mass since 1979. This was impressive but expected—even with the short growing season for turtles here at the northern limits of their range. There were, of course, larger questions: how did a turtle in one of the most fastidious, well-manned, long-term studies in the world disappear for two-plus decades? Where did it go? What was it doing?

At this point, the answers are no more than educated guesses. What scientists do know is that the ability to pose questions about a turtle going off-radar for 20 years speaks to a much larger issue.

Since 1944, the AWRS has provided boreal ecosystem researchers access to 30,000 pristine acres (12,140 hectares) of forest not open to the public, facilitating some of the best long-term ecological and population studies of wildlife anywhere. Most studies—from snapping turtles (now 47 years), to spotted salamanders (20 years), to small mammals (66 years), to Canada Jay (50 years)—have been underway since long before climate change took hold, providing baseline data against which recent species adaptations may be measured. The Canada Jay study, for instance, is one of few globally to demonstrate a clear mechanism of species decline directly attributable to climate.

Habitat preservation—whether in parks, reserves, or set-asides like the AWRS—is key to such research. And yet habitat continues to disappear at a criminal rate: thousands of acres of northern Alberta's carbon-sequestering boreal forest vanish annually to supply America with toilet paper and tarsands oil; British Columbia inexplicably accelerates cutting of its remaining temperate old growth rainforests; 76,000 fires burn through the Brazilian Amazon, an orgy of destruction sanctioned by an irresponsible leader bent on land conversion for an already out-of-control cattle industry. The list goes on. Which means that despite its failings elsewhere, the importance of the Canadian government's many new park, wilderness, and marine protected areas—mostly co-managed with Indigenous groups—cannot be over-emphasized. Nor can the work of NGOs like Nature Conservancy of Canada that protect habitat where governments can't—or won't.

Nature clearly benefits from protected areas, but so do we—most obviously via the recreation and ecological services these supply. But we often forget how much knowledge these areas also represent, and how the disappearance of so much we don't know is happening faster than our abilities to recognize the gaps.

Maybe we won't ever know what R10 was up to for 20 years, but those protected acres in Algonquin mean we at least have a chance. In the end, even not knowing informs our sensibilities around ecosystem connectivity and the minimum size of protected areas required to capture all the biodiversity within them.

Confronted with our own ignorance by a Lazarus turtle might rightly stimulate our curiosity, but it should also spark creative ways to preserve the outdoor world in which such curiosity thrives.