Whistler hosts the planet: Winners and losers at the World Cup 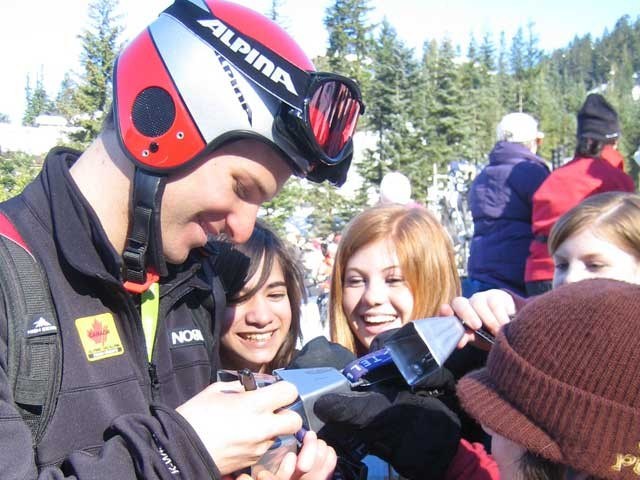 Mike Janyk doing his part for the fans.

Forget first, second and third. Though the podium winners were feted in grand style last week during the much-anticipated return of the Great White Circus to Whistler, the athletes weren’t the only ones whose fates were being played out on the slopes above Creekside. For with the Winter Games only two years away – and this event the only international test of the venues – much more was at stake for organizers, sponsors and volunteers than just getting another World Cup event off. Here, in my view, are some of the winners and losers from last week.

The sun was shining The Weasel Workers did their thing. And everyone finally got to see what high performance ski racing in Whistler is all about. For the first time since Rob Boyd won back in 1989, Whistler Mountain greeted the world’s best speedsters with bluebird skies, a hard track and racing conditions that had everybody raving. “Somehow, in some way, Dave Murray surely had a hand in this,” Whistler-Blackcomb event director Peter Young confided to me. “When I woke up this morning, I just had to send a little thanks his way...”

Perhaps it’s fitting then that I give my first winner’s wreath to the race committee.

“This was a true test of our abilities,” World Cup frontrunner Didier Cuche told me in the soft inflections of his Swiss French after the first day of racing. “The course is one of the best super G tracks on the circuit – very technical with many transitions and changes in rhythm. It’s very easy to lose time on this course. You have to stay focused all the way down. I think this is an outstanding Olympic track.”

And then he laughed. “The last time I came here – in 1998 – the weather was so bad I didn’t even pull my race skis out of the bag,” he said. “It’s great fun to finally see what this place has to offer.”

His praise was echoed the next day by his teammate, Nadia Styger, the women’s downhill champ. “When I first inspected the course,” said the eight-year World Cup veteran, “I thought it had been set too round and too slow. But today, with a hard track it was a totally different matter. You can’t ever relax on this run — you’re being tested all the time. This is definitely one of the best women’s downhill courses in the world!”

Whistler/Blackcomb also won big last week. A jubilant Hugh Smythe paced the VIP section during the super G race, glad-handing everybody in sight. “Is this fantastic or what?” he told me with a huge grin splashed across his face. “With this one event, we have a chance to completely upgrade our profile in Europe.”

Indeed. After striking out three times in the mid 1990’s in a poorly thought out campaign to hold World Cup downhills at Whistler in early December, it appeared for a time like the resort had been struck from the FIS event list. In fact, I remember a highly-placed official telling me point blank that we’d never see a downhill here again.

But that was before Vancouver’s successful Olympic bid…

“We have over 200 members of the media here for this event,” Smythe crowed. “Just think about all the stories being sent around the world today. And the pictures! To put it in context, Lake Louise only had 40 or so media in December when they held their event. This is huge for us. And very gratifying!”

Another big winner was the Whistler Mountain Ski Club. From what I saw, alumni Britt Janyk, Robbie Dixon and Manny Osborne-Paradis represented the club exceptionally well during the weekend’s various events and showed the world just how great a race program the WMSC offers.

“We’ve always had our own style here in Whistler,” said the ever-smiling Dixon who was competing in his first ever at-home World Cup race. “I don’t know exactly how to explain it. I guess it’s more of a free-spirited thing. Having fun and going fast. But it’s something that we all share – and we value that identity. I can’t speak for the others, but for me it really means a lot to race in front of my home-town fans.”

For Janyk, who has made an impressive jump this year from perennial workhorse to top World Cup contender, the week was fraught with interviews and hugs and handshakes and well-wishers mobbing her everywhere she went. Yet she never lost her cool. And when race day came, she didn’t just ski down the course. She raced to win.

“I’m not satisfied with fourth place, far from it,” she admitted after the downhill, “But I am satisfied with the way I raced today. I felt focused and I attacked from the start. I made a few mistakes at the bottom, and that cost me. But I can live with that.”

She laughed. “Besides, this was my first fourth place of the season. It’s not so bad.” Such a classy lady – makes one proud to be a Whistlerite…

Another winner was the Canadian media. While most of its members take it for granted, the easy-going accessibility of Canadian athletes make their job one of the easiest of any country’s media (just try and get a candid quote from an Austrian after a bad race). To watch Janyk and her two teammates Emily Brydon and Kelly Vanderbeek patiently answering all the questions a less-than-ski-educated coterie of journalists can throw at them minutes after they have given their all on the course, is to truly appreciate just how professional these gals are.

But there’s more. For each of them was willing to speak to our francophone colleagues in their own tongue. From the perfectly bilingual Vanderbeek – “Oh my god,” said one beguiled Radio Canada cameraman, “not only is she beautiful, but she speaks French like she was born to it” – to the slightly more B.C.-inflected Brydon – “If you want to hear some really fractured frenglish,” she told a camera crew with a impish grin, “I’m the girl for you.” – the three speedsters completely carried the day. It was beautiful to watch…

Although it might not seem so at first, another big winner last week was Alpine Canada. As CEO Ken Read put it: “Nobody is ever happy with fourths and fifths. But to see four Canadian guys in the top fifteen in super G is a real tribute to our program.”

He smiled. “To be honest,” he whispered to me, “I’d be more concerned if we’d gotten one racer on the podium and nobody else in the top fifteen. This way, our guys stay focused – and hungry!”

One small bit of statistical trivia might be worth mentioning here. As former Olympic gold medallist Kerrin Lee Gartner put it so well, “Nobody who has won a pre-Olympic race has ever come back to win gold during the Games.” So for Janyk, Erik Guay and John Kucera, a near-podium finish at Whistler last week might just be the motivation they need to return here two years hence and really kick some international butt…

While the winners at Whistler easily outnumbered the losers last week there were significant groups who were poorly served. And they too deserved to be identified. After all, if we can’t learn anything from events like these, how the heck are we ever going to get better as international hosts?

The biggest losers were the poor hapless spectators. While racers, coaches, FIS, VANOC and IOC officials, media and VIP sponsors were treated with kid gloves, the great unwashed were pretty much left to their own devices. And it wasn’t a pretty sight.

I watched a little old lady struggling up the hill to come cheer her American grandson at the finish line. Out of breath, and clearly beyond her comfort zone, she told me she just couldn’t understand why she was refused a ride to the finish zone with the near-empty buses designated for VIPs and media. I couldn’t give her an answer…

Realizing their gaffe, the organizing committee eventually did allow the public to board the ‘reserved’ buses at the base of Creekside. But the damage was already done. ‘Spectators Not Wanted at Whistler World Cup’ teased one Vancouver paper. Too bad. Such bad press could have easily been avoided…

More importantly, senior management at Whistler-Blackcomb needs to address the issue of lack of access to the lower half of the mountain. From racers to spectators, organizers to locals, nobody was happy with the total closure there.

“It was immensely impractical,” said Canadian women’s coach Rob Boyd. “Unless you actually skied on the course, there was no way to get back to the bottom of Creekside. After practice on upper Dave Murray during the men’s Super-g, for example, it took some of our girls more than an hour to make their way back to our team condo. That has to change before the Olympics.”

Fortunately, there is a fairly reasonable solution. But it’s going to cost a few shekels. And who pays – VANOC or Fortress/Intrawest – will surely become the source of heated debate over the next three or four months. But I don’t believe there is any other choice. Whistler-Blackcomb has to cut another run from Highway 86 to the juncture of Frondola!

It’s a no-brainer. From skier’s left of Franz’s Creek (just a few meters beyond where Highway 86 spills into the main run), wends a beautifully-forested slope that gently drops down the lower half of the mountain, pretty much mirroring the slope angle of its already-cut neighbour to the north. With a little Zen pruning and the sure-minded trail cutting experience of W/B’s Arthur DeJong and Bob Dufour, the new run could be cajoled back over the creek to rejoin Franz’s run right above Fog (er, Frog) Bank.

The result: access to lower Franz and a way down to Creekside from mid-station AND access to one of the most exciting view spots for both Olympic speed courses! Seems pretty straightforward to me.

Memo to Arthur: let’s go skiing, I’ll show you exactly where I mean…